The hunt for THE best travel camera bag

More than a few years ago we were planning our very first trip abroad post-children (to be fair, it was our first trip abroad since our honeymoon. What? We LOVED camping!)
While we were sorting all the packing lists we had a small ‘debate’. We had to carry passports and cash and bank cards and all the other important paraphernalia you take when you travel. I, of course, would carry it in my bag. But the husband rather correctly pointed out that I’m not known for my tight organisation skills – and rather more for my ability to lose anything. Should I be in charge of our worldly possessions, there was a fair chance that they’d be left under the table of the first cafe we visited.

In addition to which, said husband is a little teeny bit of a paranoid android, convinced any and all strangers in public spaces are only there for what they can swipe out of a person’s bag/pocket/backpack.

This worried him immensely – I’m not a big worrier myself, but I don’t like it when the angsty one gets… angsty. So I took the situation seriously, and looked for a solution. Which happened immediately when we came across a company called ‘Pacsafe‘, and their theftproof bag.

He hit BUY with more haste than was probably polite, and a few days later a nifty little bumbag was in his possession. Yes, I said bumbag.

Now don’t you laugh. A style-less bumbag it may be, but it’s still a beloved essential on any trip. It contains all our essential documents, plus our cash and bank cards. It is entirely theft proof (I’ll get to that bit), and sits snugly strapped on to the husband’s waist, thereby being Laura-lose-proof too.  We’ve never knowingly been pickpocketed through the European cities we’ve visited – but that may well be because my bag that’s on display (which has actually never been lost, I hasten to add) only ever contains water and a map.

So when the 17yr old gained his Press Pass for Reading Festival and was about to lug over a thousand pounds of photographic equipment amongst 90,000 drunk teenagers (himself probably included). I was more afraid of equipment damage than boy damage, if I’m honest. But my brain immediately reverted to my own travel safety – and I wondered if Pacsafe could possibly do an anti-theft travel camera bag too.

So I visited the website – and blimey things have changed. There’s a whole RANGE of brilliantly good looking bags  – and not a bumbag in sight – which all have the same (actually, much much better) security of our beloved bumbag. And there was the V17 Camera Backpack – THIS was what the boy needed.
I contacted Pacsafe, who were foolishly confident in taking on the challenge of keeping one boys gear safe for the festival weekend… and this is what happened in his own words…

Recently I journeyed across the country to enjoy one of the largest music festivals the UK has to offer, Reading Festival. And with me I brought (amongst other things) my Canon 70D, an 18-200mm lens and a Gorillapod – and I had them all bundled away snugly in my Pacsafe: Camsafe V17 camera backpack. And honestly? I would not have chosen another bag to keep my camera safe.

Big festivals mean an awful lot of people, and not all of them are necessarily there to enjoy in the same way you are. I was aware that within the vast crowds and ocean of tents theft was going to be an issue. Ordinarily that would have made me anxious, carrying over £1200’s worth of camera gear plus my phone, battery packs and a further £130 in cash on me. But I genuinely did not feel worried when I had it all locked away in this bag. 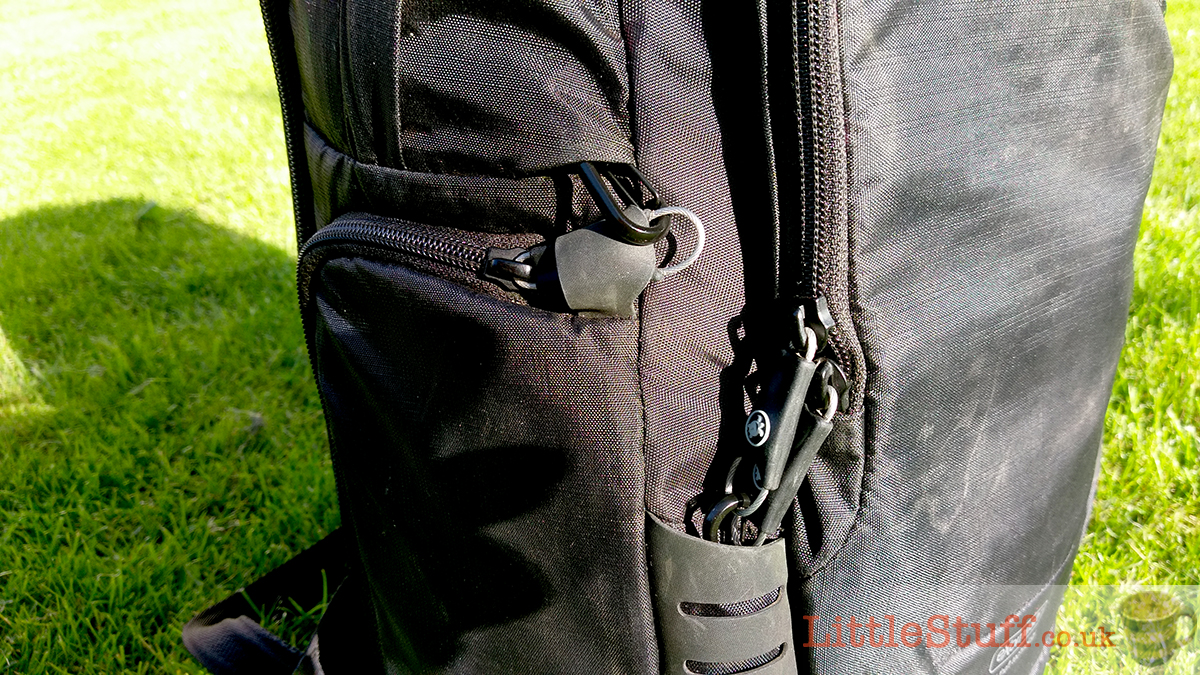 The camera bag has an ingenious lockable zip design, that allows you to fasten away zips securely, without showing an obvious padlock (which would have immediately made me a target). The zips slide away under a small loop of tough rubber where they clip to a metal hook – which in turn is attached to a metal wire secured within another part of the bag. It sounds complicated but it’s such a simple solution it’s genius. It’s so easy to access that it’s never an irritation – but it will flummox anybody looking to make a quick grab. 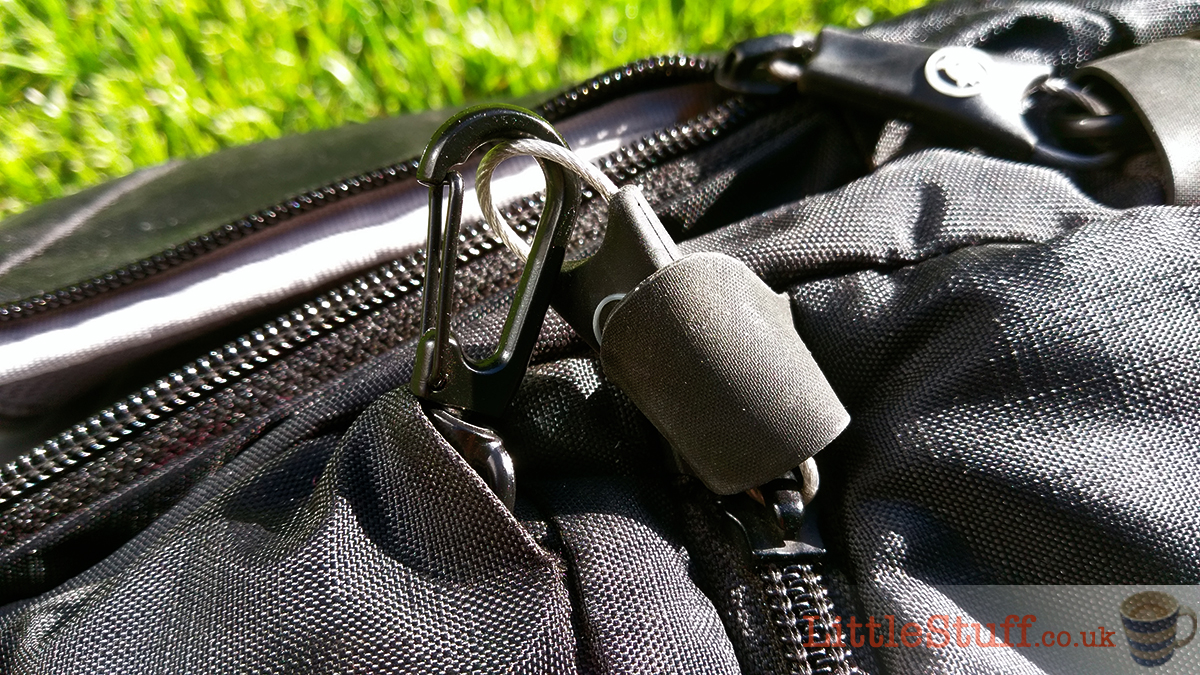 As with any good backpack there are loads of compartments and useful pockets and pouches. The large front pocket has plenty of dividers and pockets to keep all the smaller items organised and tucked away, with a clip for keys etc. The back pouch is padded and protected, and big enough for a laptop (you can see an iPad Air in there currently, in it’s case) – and equally works for outdoor activities with a hippo waterbag (there’s even a neat hole on the top for your water hose to feed through). 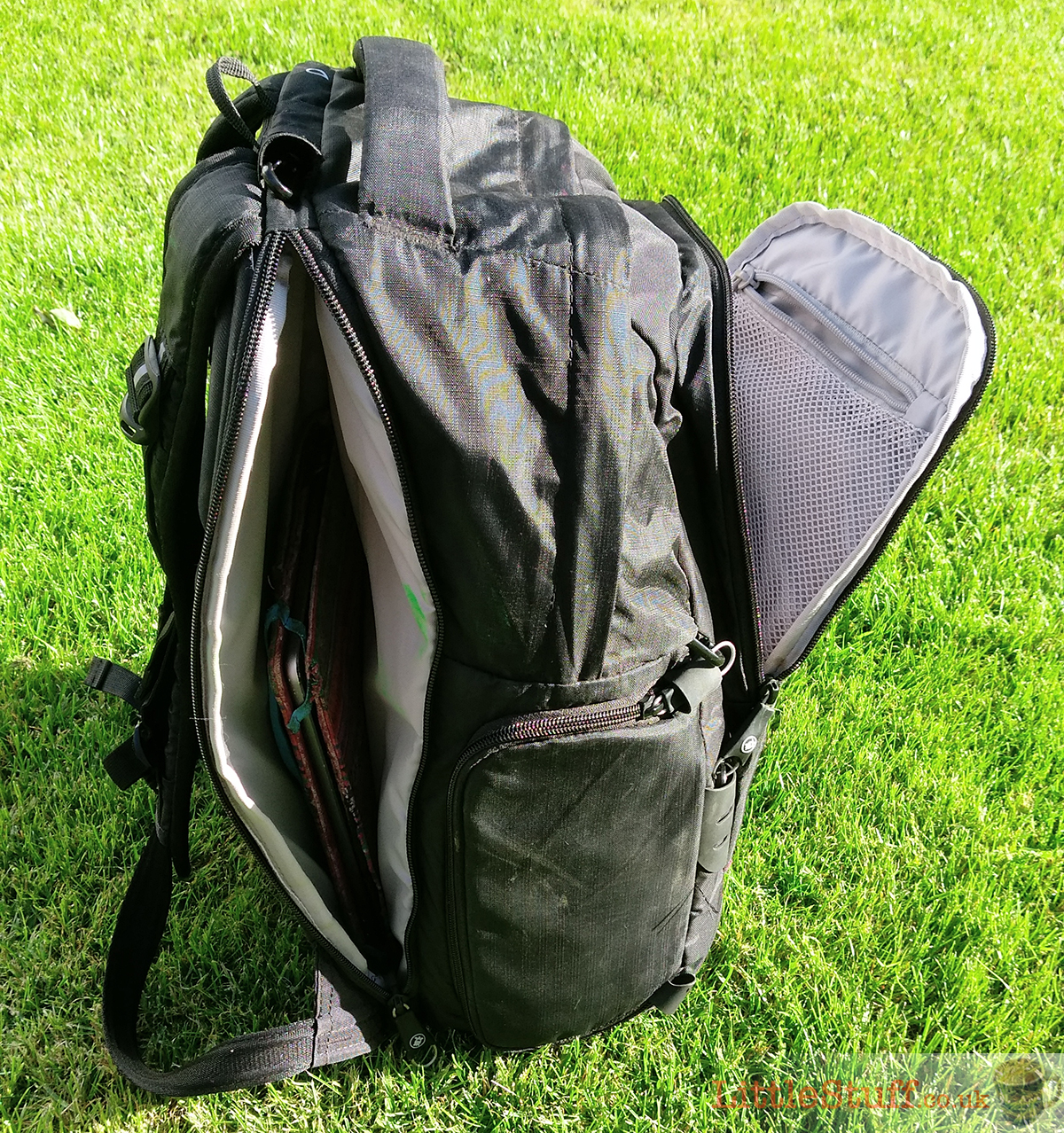 But the very best feature of the V17 is that the padded camera compartment is actually accessed from the side of the bag – the obvious place for ‘dippers’ is straight in the top, of course, where I stored nothing but snacks and water. You can access from the top if you need to (the separator inside is a simply drawstring like in a traditional rucksack),  but I loved the security of knowing my most precious gear was tucked away in an almost secret compartment. 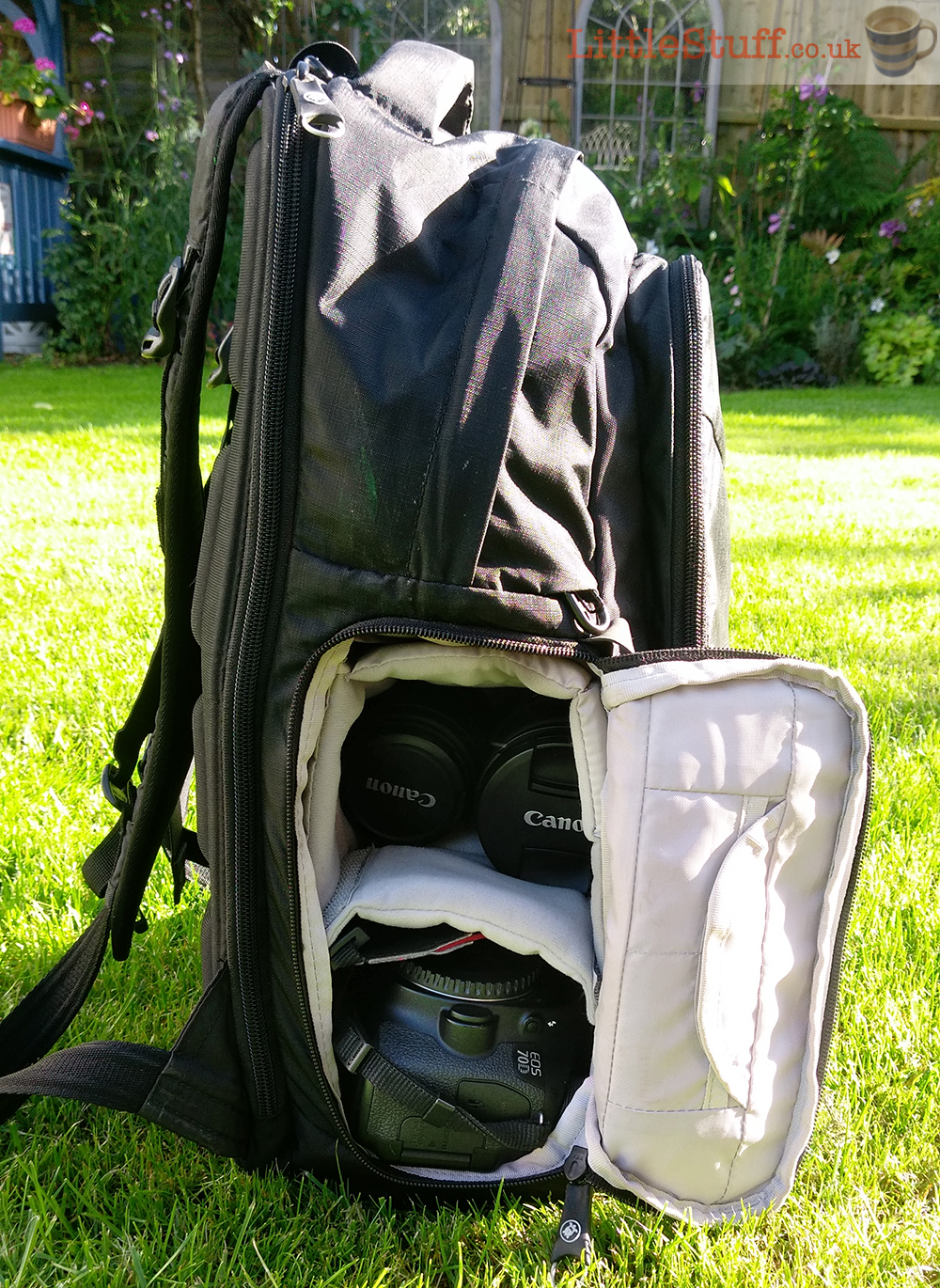 The camera sat comfortably in its protected area. This ‘side’ compartment (which is actually the full depth of the rucksack) is fully padded and modular with soft padded velcro dividers like most camera bags, so with a little adjustment my camera was totally snug and did not move around even when I was jumping. The flap of this pocket also has handy storage area for memory cards – it’s the small touches that make this bag totally unbeatable on a practicality level too. 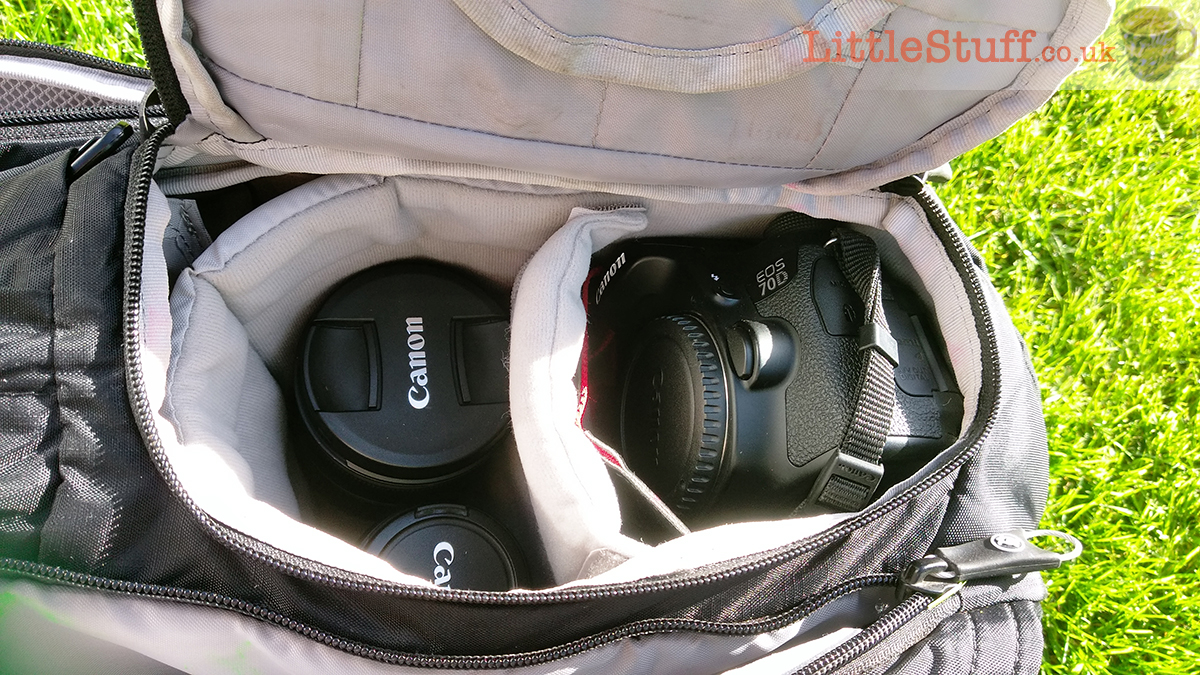 Of course, some thieves don’t bother with unzipping and dipping – they simply use a knife to target the outside fabric panels of bags (front, bottom or side), allowing valuables to fall out into their hands. Yet another problem solved by Pacsafe – all their bags have lightweight slashguards concealed in the most vulnerable areas of the bag, helping to protect your gear from a quick slash-and-run theft. The other use for a knife is to slash the straps, allowing the entire bag to be swiftly lifted and removed, but again Pacsafe have thought of that, incorporating a flexible, lightweight, stainless steel wire through the straps. If it’s clicked on, it’s not coming off until you choose it to!

Honestly, this one bag changed the feel of the entire festival for me. I wasn’t tiptoeing around on eggshells constantly on the lookout. It was small and lightweight enough to not be a problem, and I just tucked my camera away when done, feeling totally safe with it on my back as I weaved through the crowds; the bag came with me everywhere. It joined me right at the front of 21pilots and deep into the dance tent, it got bodypainted (by a rather over-enthusiastic me liberally applying it everywhere else). Despite being tossed around, pulled, pushed, crushed, splashed in paint and moshed with, the bag looks as good as new (and unlike the parents bumbag it really is a cool looking bag).

And what’s more, my camera, lens and phone were just as fine. This bag was probably the single most important piece of kit I brought with me to the festival, because not only did it keep my gear in one piece, it gave me the absolute peace of mind which genuinely allowed me to enjoy myself without the constant fear of theft or breakages. I cannot imagine going anywhere without it – and can already tell you it’s going to be a constant companion during my Gap Year travelling.

The Pacsafe Camsafe V17 Anti-Theft Camera Backpack is stocked by All Outdoor Ltd, and they’re selling the V17 on Amazon for just under £140 currently – but you really must be quick; I have insider knowledge that they are stopping production of this model this year. They do other camera bags, but if you want this one, grab it now folks, don’t stop to think about it. You’ll miss out, and then you’ll regret it.

And if this bag isn’t the right thing for you, try popping over to Zena’s Suitcase – as well as being an all-round brilliant travel blog you should be following anyway, she’s written a brilliant round up of anti-theft travel bags; there’s sure to be one there you’ll love!