There was an urgent tug on my dress, and two big serious eyes peered up at me with a worried expression
“Mummy, the rocks over there, look! There, look! They’re smoking! It IS going to be okay, isn’t it?”
I smiled inside, but realised that being ‘on a volcano’ is a Very Dangerous Thing Indeed to a seven year old brain, so I took hold of her hand and promised her that at the very first rumble we’d leg it together… 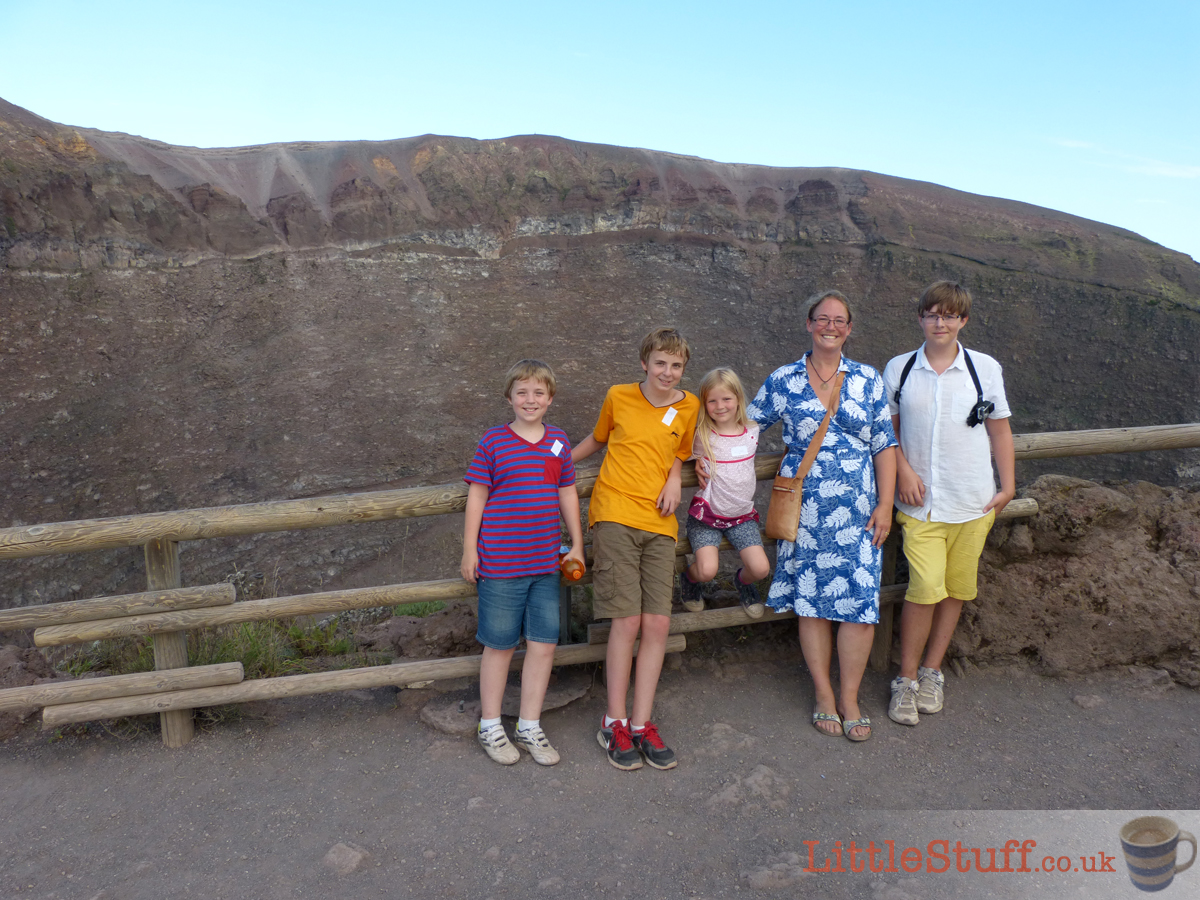 Littlestuff atop Vesuvius next to the rather large crater! Gulp

Having spent the morning in Pompeii, the kids had reached their limit of old ruins and were ready for an adventure – and we were hoping we’d left enough time to squeeze in Vesuvius too. I’d done some research the day before, and knew which bus company we wanted to get us to the top of the volcano.
I just hadn’t figured out exactly where to buy the tickets.
Luckily, literally right outside the gates of Pompeii there’s a train station, a tourist information… And a small ticket hut for the Busvia Vesuvius tours. Hurrah!
The Busvia vehicles are the only tourist transport along the road Matrone, one of the oldest tracks of Mount Vesuvius, and I had been reliably informed by the interwebs that they are far and away the BEST way to get up to the top.

We managed to get on the last bus of the day – just an ordinary-looking city bus which took off at a literal bottom-squeaking pace through the busy streets of modern Pompei, much to the joy of the boys. Before long we had left the city behind, and pulled into the Busvia depot in the Vesuvias National Park at the foot of the mountain.
Here we left the city bus, and transferred to a huge 4×4 bus which was going to take us to the top. A rather gruff and growly driver pointed at Jolly, the youngest boy of the party, and flicked his eyes at the front cab of his bus; Jolly looked distinctly nervous at first, but when he understood he was being invited to sit up front next to the driver he couldn’t scramble up into the cab quick enough. Boy Heaven!

The ride through the steep forest was bouncing, sometimes bone-jolting and occasionally highly alarming. I steadfastly refused to look down, prefering to keep my eyes fixed on the upward slope rather than the way in which the ground fell away from within a few inches of the tyres on the downards side of the gravel track. 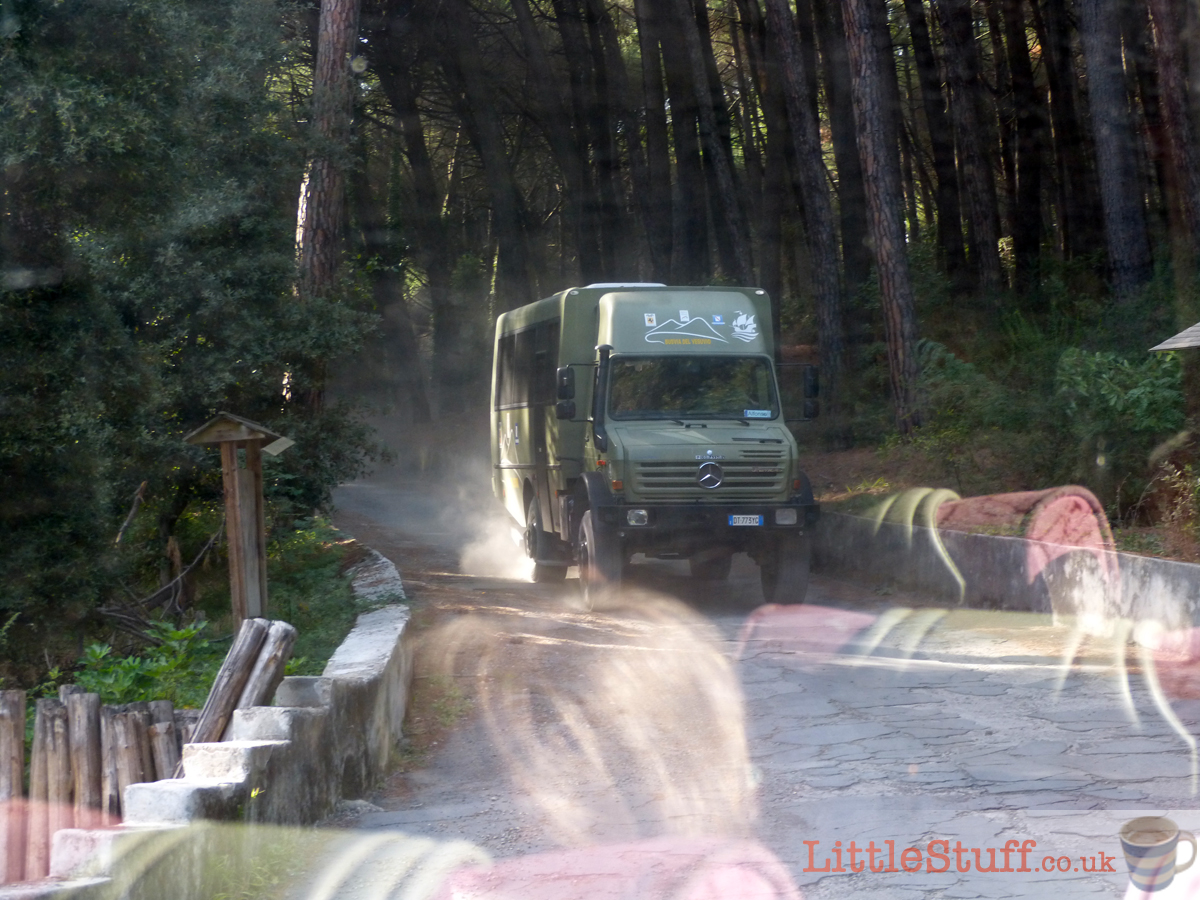 Our 4×4 bus ride to the top of an actiive volcano…as you do!

Reaching the stop we still had a 15 minute walk to the summit (I might’ve been regretting my choice of Birkenstocks for the days footwear as I scrambled along the stony path), where a guide met us and gave a quick talk about the volcano. I was fascinated to learn that the peak we call Vesuvius is actually more recent, and the summit that exploded and buried Pompeii and Herculaneum is the second, wider crater it sits in (yes, yes, it makes sense when you think about it, I know). And over 700,000 people now live in the ‘red zone’, which would once again be buried if (or rather, when, apparently) Vesuvius blows again.

We then had just 30 minutes to explore the path around the edge of the crater, taking in the amazing view to the sea as well as the madness that is a live volcano before racing back down to ensure we caught the last bus back. We did NOT fancy walking down!

Our journey back down the coast to the campsite at Paestum was a mystery – straightforward enough, but as we left the city environs behind, the traffic coming the other way grew heavier and heavier. By the time we were approaching the nearest town to Paestum the opposite carriageway was nose-to-tail and almost at a standstill. By comparison, our side was as empty as we expected for 8p.m. on a Sunday night in rural Italy. It was spooky – like everyone knew something we didn’t.
Then we realised – it was SUNDAY. The traffic was simply all the weekenders heading back home for Monday morning and their jobs and schools. Phew – we hadn’t missed an end-of-the-world announcement after all. 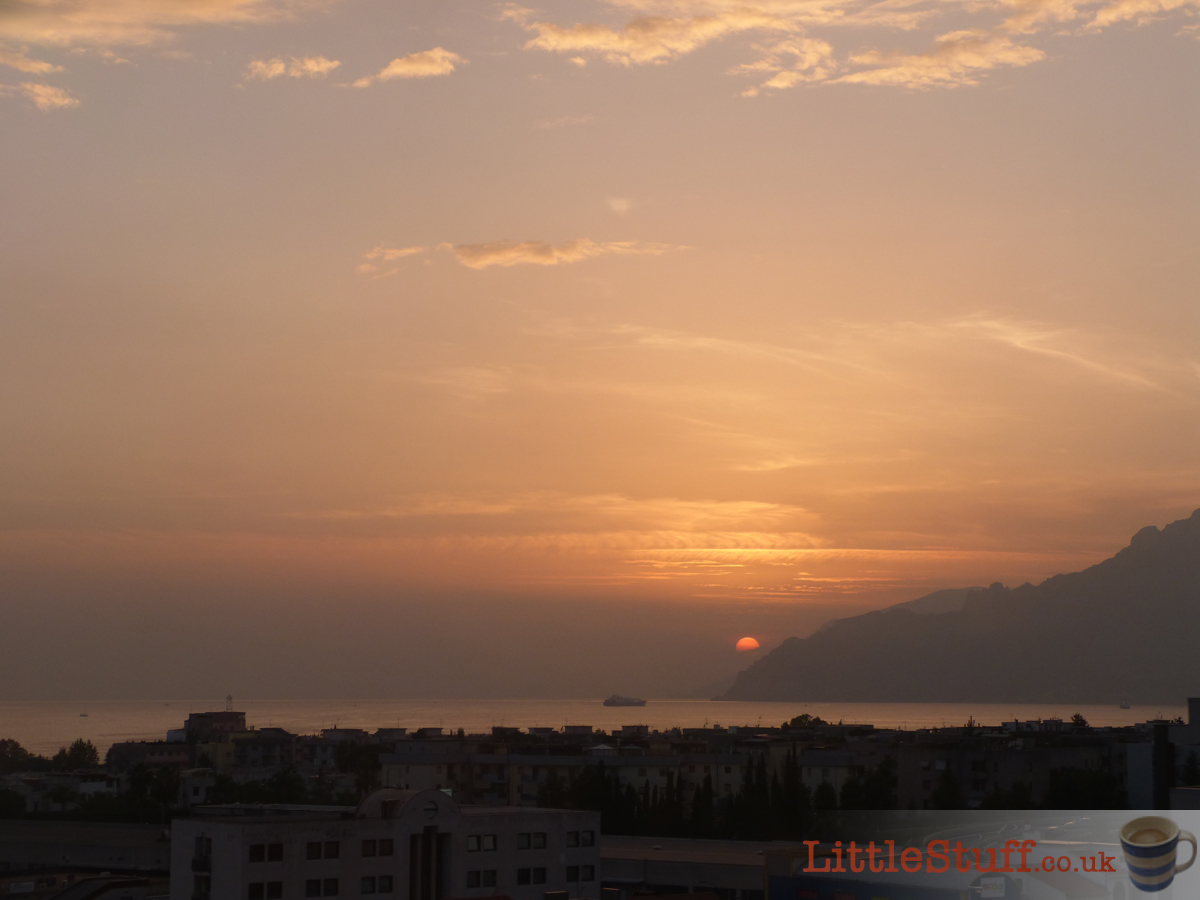