I gazed through the envelope of viewing space in the messy gauze covering, and felt my heart actually give a double thump.
There he was! Cave Canem! 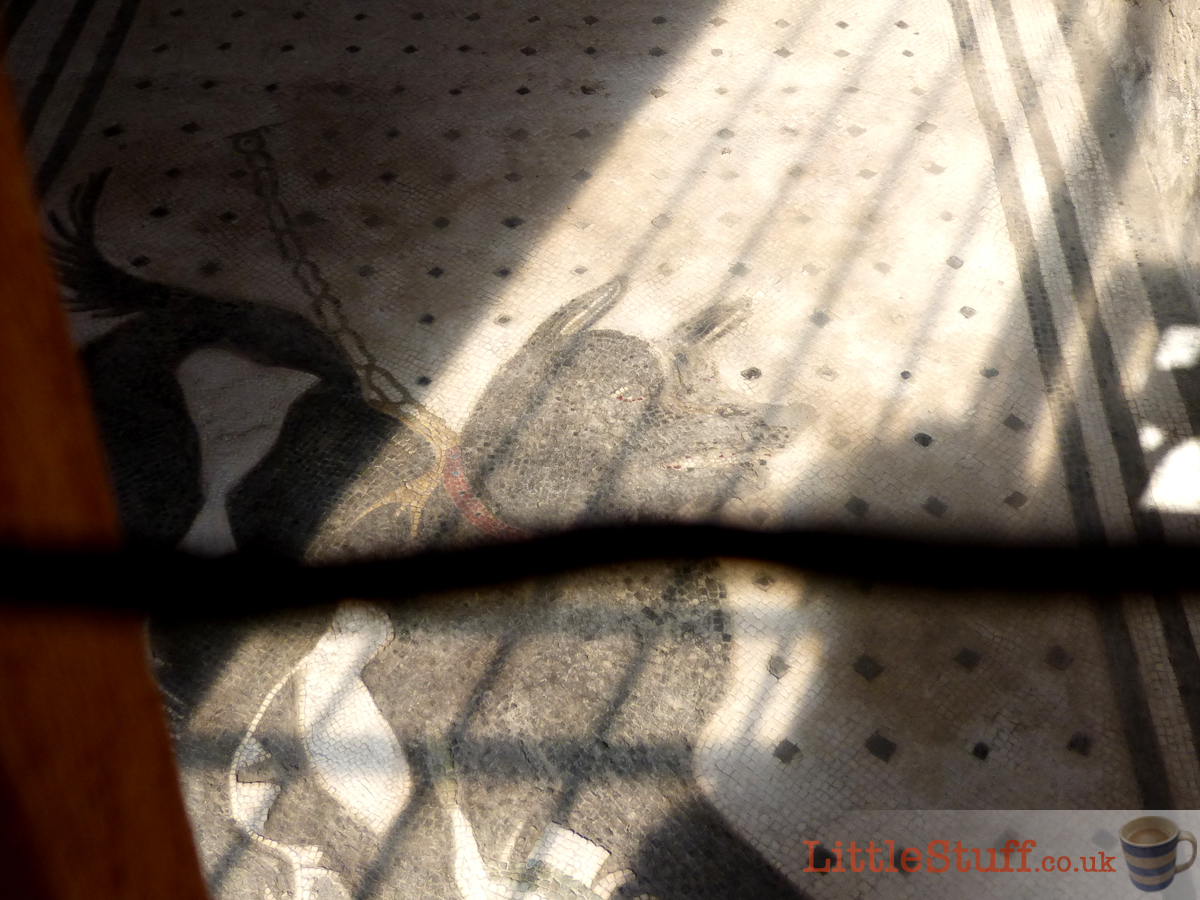 The mosaic dog that had astonished my brain and made me fall in love with Ancient Rome when I was about 9.
And the phrase; ‘Beware of the dog’, when the dog in question is simply a tiled mosaic. Oh how I was gobsmacked when I discovered that not only did the Romans love dogs, but they had a sense of humour, too!
And unexpectedly the dog is far more beautiful than any picture had ever conveyed to me. There’s always a risk when you wait so long for something that it simply won’t live up to your hopes, that you’re left disappointed and flat. But when something you’ve loved for so long from afar is as magical and amazing as you imagined it would be?
That’s a pretty special feeling.
And then the guide led us inwards – and we walked inside dog’s house… 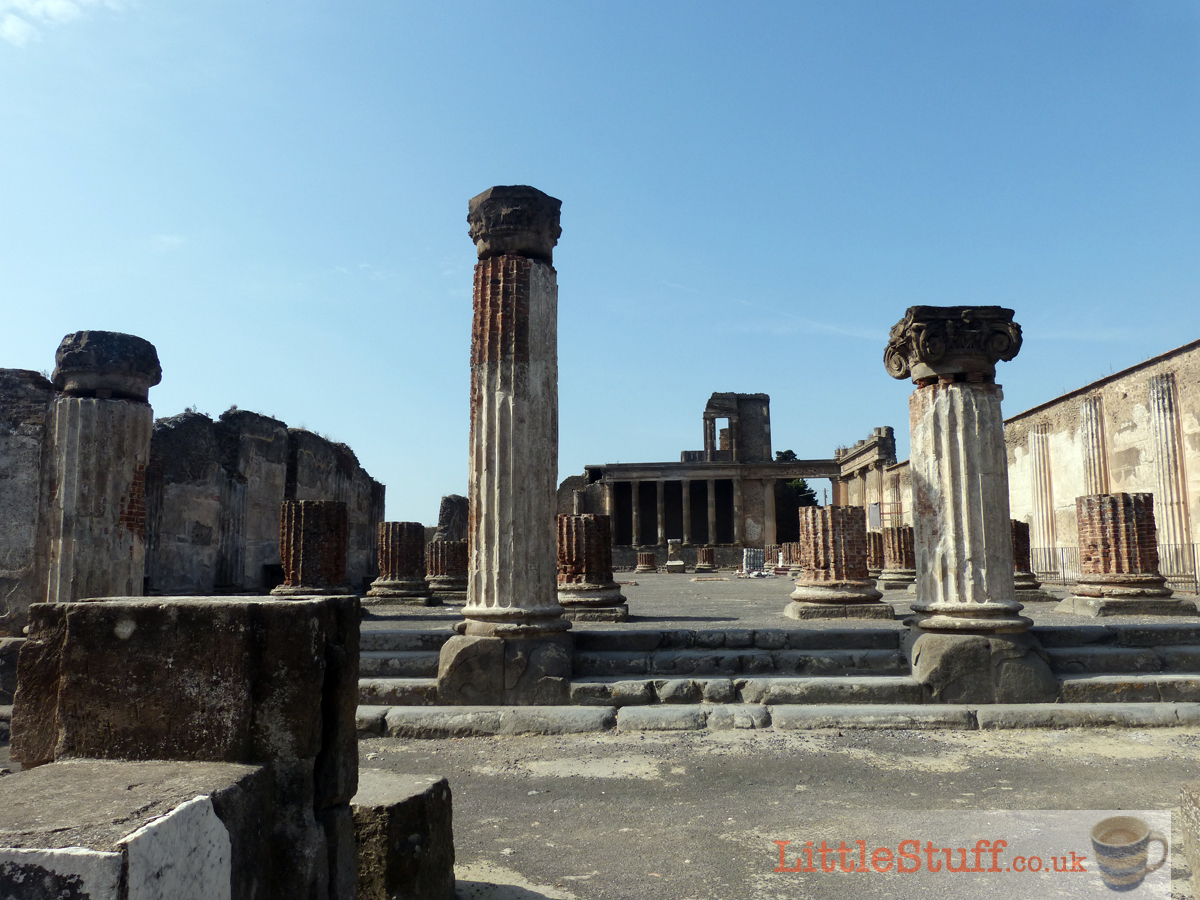 Just a tip of the iceberg so to say, just some of the many many remains of the ancient city of Pompeii

Having realised our campsite at wonderful Paestum was only an hour from Pompeii, and having become rather attached to the peace of Camping Dei Pini we decided that instead of moving on to a busy city site, we’d simply drive up to Pompei for the day.
So another early start ensued, and on Sunday we headed north to find Pompeii.
We parked at Camping Zeus, which is literally a 2 minute walk from the gates of Scavi di Pompeii, and offers day parking with easy access for large motorhomes like us; excellent.

In the unexpectedly short line for tickets (we LOVED the out-of-season lack of tourists!) we decided to follow the advice I’d read online and pay for a guide to ensure we didn’t miss the important parts, as Pompeii is so vast. There are lots milling around the queue, so we followed the excellent suggestions on TripAdvisor and spoke to a few, finally selecting one who spoke good English, and that we could hear clearly.

The guide cost us €45 (€15 each for three of us, the youngest three of our super six being free), and it was totally worth it for the way the history and the way of life in the town came alive for us. We could have wandered all day and not seen half as much without the guide pointing small details out to us. We all learned so much, from the different methods of building between Etruscan,  Greek and Roman to the modern ‘cat’s eyes’ the Romans placed in the roads, and the sliding doors used for shops; who knew?! 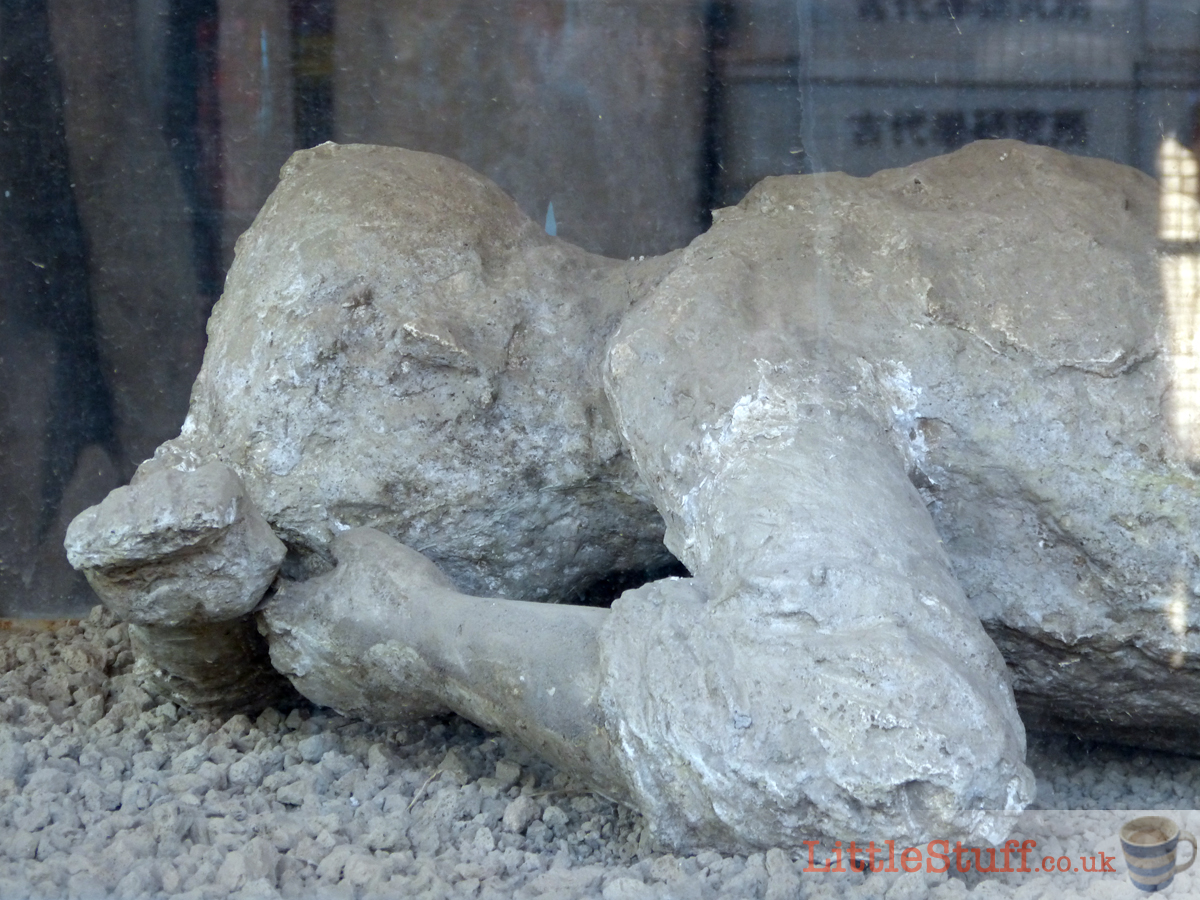 Don’t be expecting to find dramatic figures of the survivors strewing the streets, however – Pompeii is very much a ‘town cleaned up’; the more personal remains are all tucked away behind a gated area, which you can view but not get close too. Even so, they were a sobering sight which has stayed with us all.
Walking through intact buildings with the frescos still on the walls was also odd – 2,000 years since anyone lived there, and yet it did feel as though we were actually walking in someone’s home.

My beautiful mosaic dog up at the top (yes, he’s all mine) lived in a cool, peaceful house owned by ‘The Tragic Poet’, and it had an airy atrium and a pretty little garden. Walking through we all had the strangest feeling that we were literally stepping backwards, walking through another time and place. 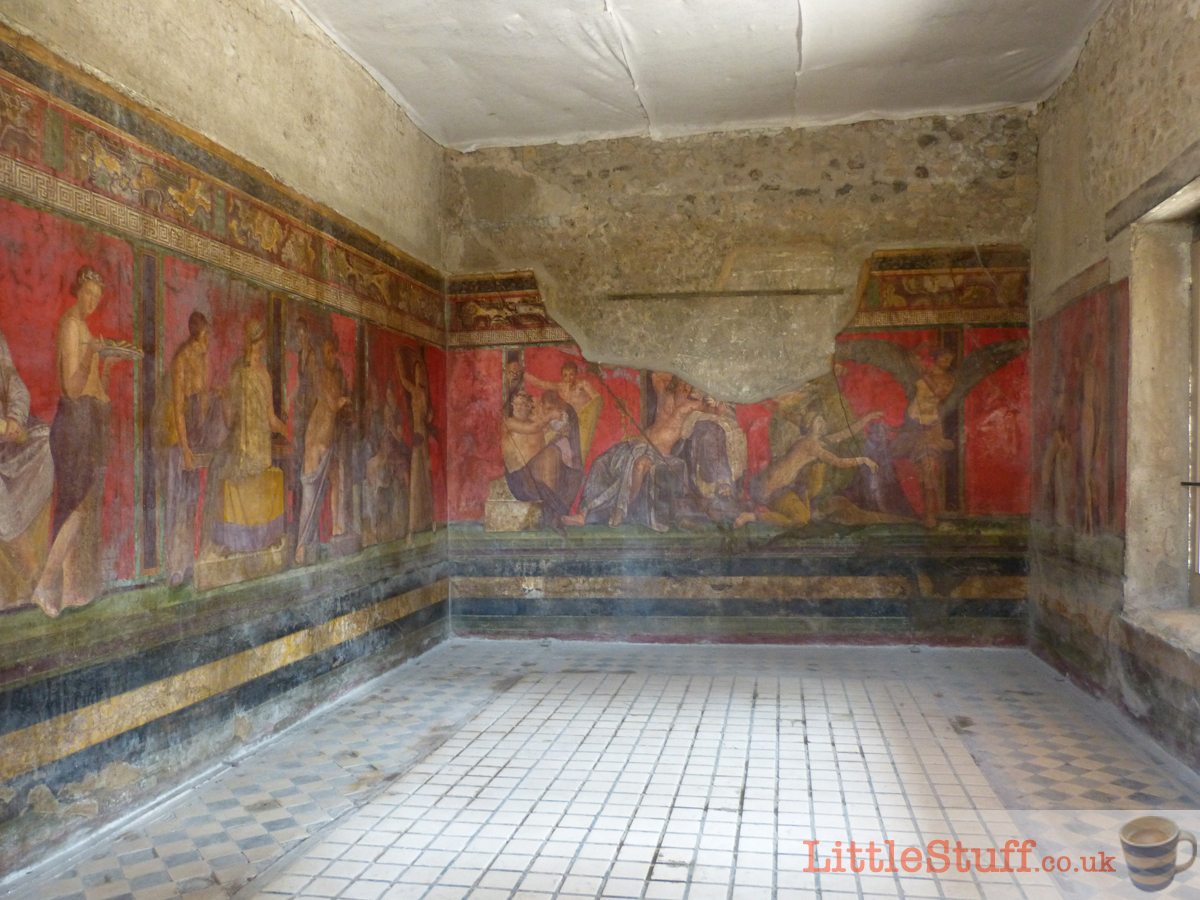 Inside the Mystery House Bacchus wall fresco’s, almost like it was painted just yesterday, so vivid just amazing!

We spent over three hours in Pompeii – by which time the younger ones had frankly had enough. Refuelling was now a necessity, so we decided to brave the on-site cafe; which turned out to be a good choice. yes it was crowded with school trip children, but actually it was cool, airy and spacious, and a slice of pizza (which was surprisingly great value, and hugely tasty too) was just what we all needed.
Then, sadly, we knew we had to leave if we were to make it to the top of Vesuvius this afternoon…

The official site for Scavi di Pompeii is here – http://www.pompeionline.net/pompei-scavi/orari-e-informazioni-biglietteria –