The Unexpected Joy of Paestum (No, I’d never heard of it either)

Our first planned trip on arriving at Camping Dei Pini was to Paestum the following morning (no, we’d never heard of it either, but the Rough Guide says it’s definitely worth an explore). Paestum (or Poseidonia as the city was originally called, in honour of Poseidon, the Greek god of the sea), was founded in the 6th century BC by Greek settlers – it didn’t come under Roman control for some 600yrs in 273 BC.
Honestly – I didn’t expect to visit ancient Italian sites to explore even more ancient Greek remains! 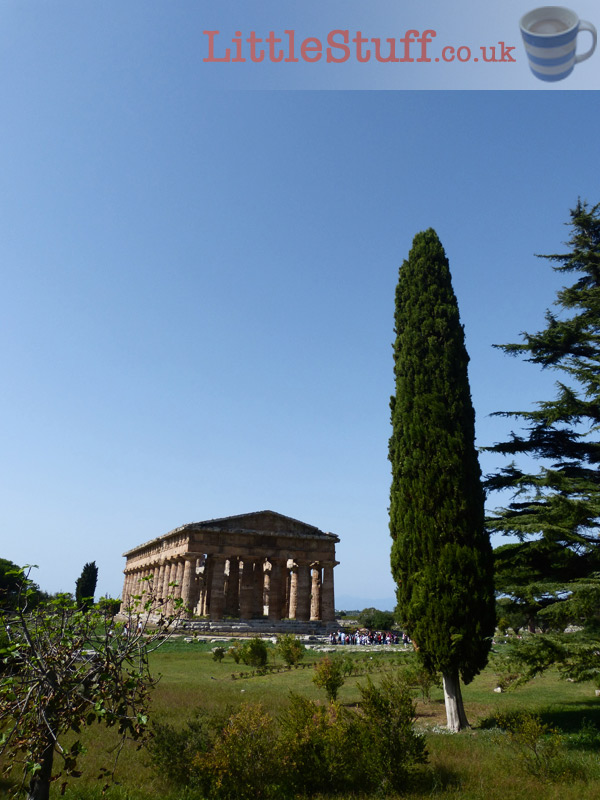 Our first glimpse of the Temples as we approached on the road. The weather was being very kind… :) Look at the SCALE of the place. That coloured smudge at the front of the temple steps is a large group of tourists!

Walking from the campsite took us 15 minutes or so along quiet country lanes (it’s only 1km, but it was hot and scenic and frankly we dawdled), reaching the back of the site and following the high ancient wall around to the front entrance. 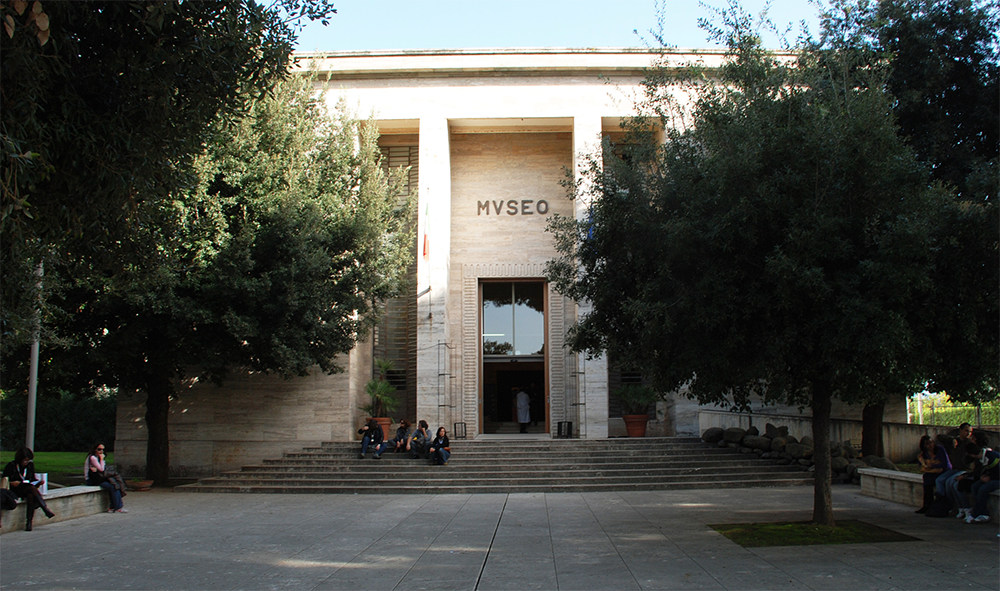 Entrance tickets are available from Paestum Museum itself – and stepping from the hammering heat into the cool soothing interior to find the fee includes the museum it was an obvious choice to have a quick look round while we were there.
Almost two hours later we stepped out again, eager to finally see the ruins we’d been reading about and looking at…

What an amazing museum – built in the 1950’s specifically to house the finds from the excavations of the ancient town, it’s laid out on a grand scale which allows children to move freely and explore randomly. Laid out over three floors, you journey through the time ranges, from Primitive man to the Romans and beyond.

Inside the building you find not just glass cases filled with interesting artefacts (though there are so many of those I could have spent twice as long looking and yearning to touch). 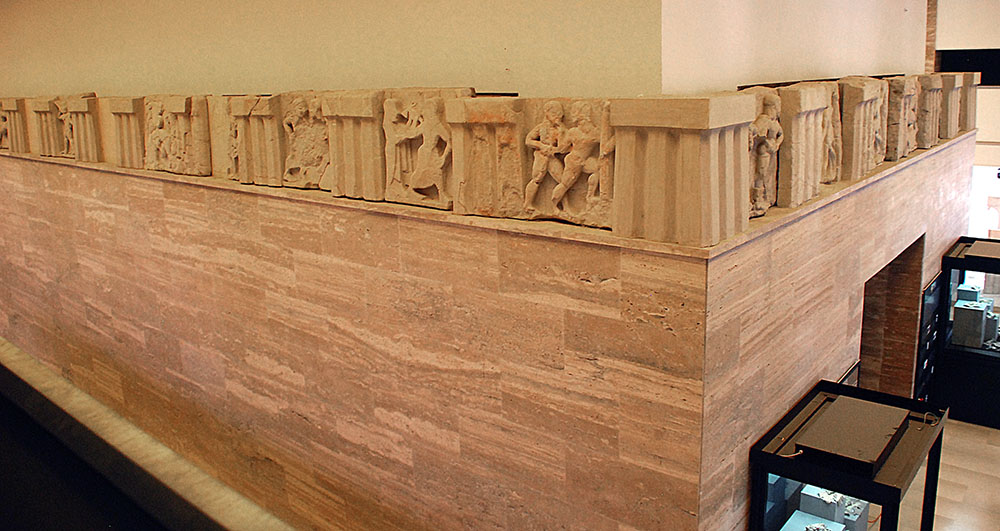 The Sele frieze can best be seen form the balcony ont he first floor – it has been reconstructed from one of the oldest Greek buildings on the site, and thought it’s a little battered it’s amazing to see it physically laid out, the carvings as strong and physical now as they were over two thousand years ago.

The sheer physicality of the remains is what made the museum so interesting for the children – gazing into cabinets soon loses it’s appeal, but seeing the reconstructed artwork from walls and tombs (though I’ll admit the Tomb of the Diver audiovisual display was fascinating, but entirely lost on the younger audience) meant they totally grasped what they were looking at. 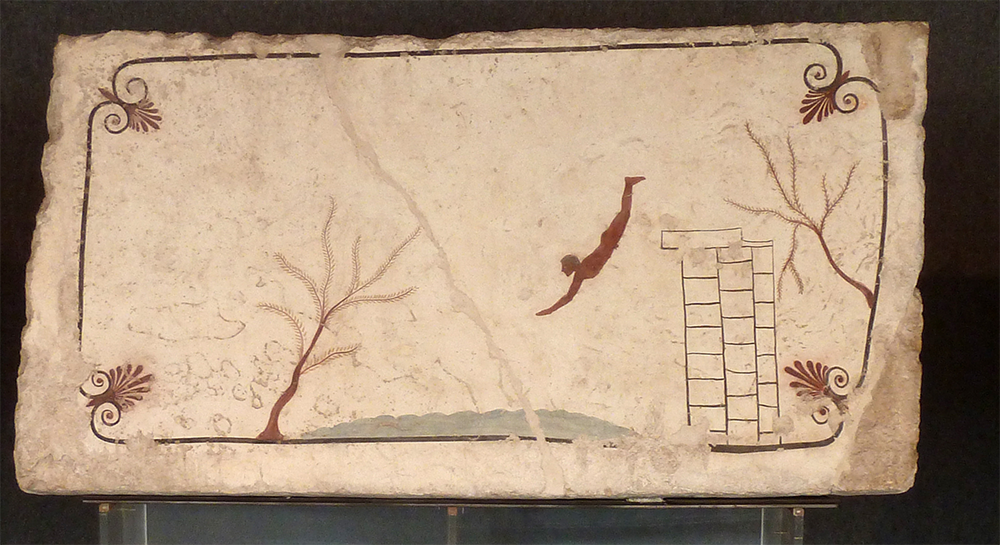 For me, the highlights were the personal Roman remains – the cooking implements, the hairpins, the day-to-day paraphernalia that seems to stretch across time to the person who handled it. Plus, the artand sculptures – this particular statue transfixed me. 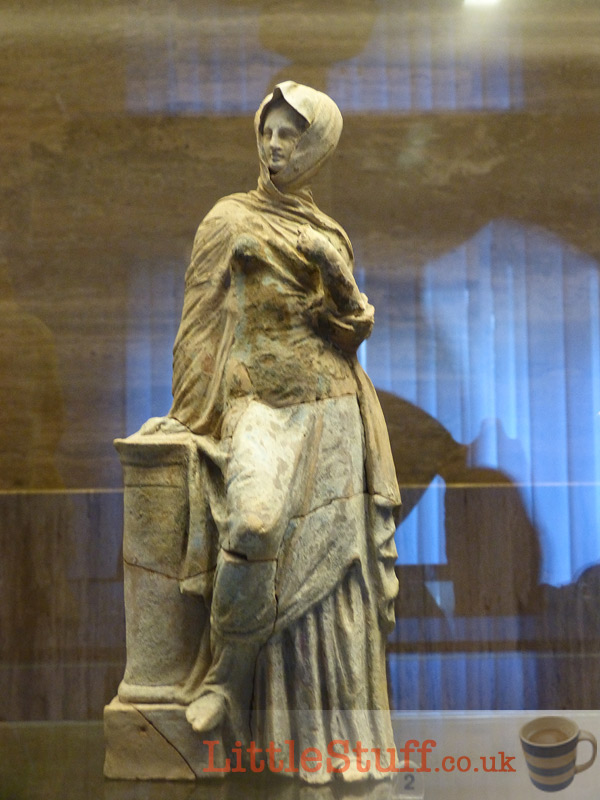 I couldn’t drag myself away from the Greek and Roman art and sculptures. This figurine is 2,000 years old. Two Thousand Years. And I love her.

The children loved the reconstructions and the audiovisual displays – there seemed to be a complete Italian commentary in a dark room demonstrating hunting – our Italian was too sketchy to grasp the finer details, but it was gripping nonetheless!

We left before I was really ready, but we had the archaelogical still to explore. Stopping only for the obligatory ice cream from the handily-situated Bar Gelateria Museo (brilliant service and utterly delicious, obviously – except for the strawberry, which tasted like fake strawberry syrup much to Bear’s dismay. She made up for it with the amazingly good lemon she’d combined it with though) 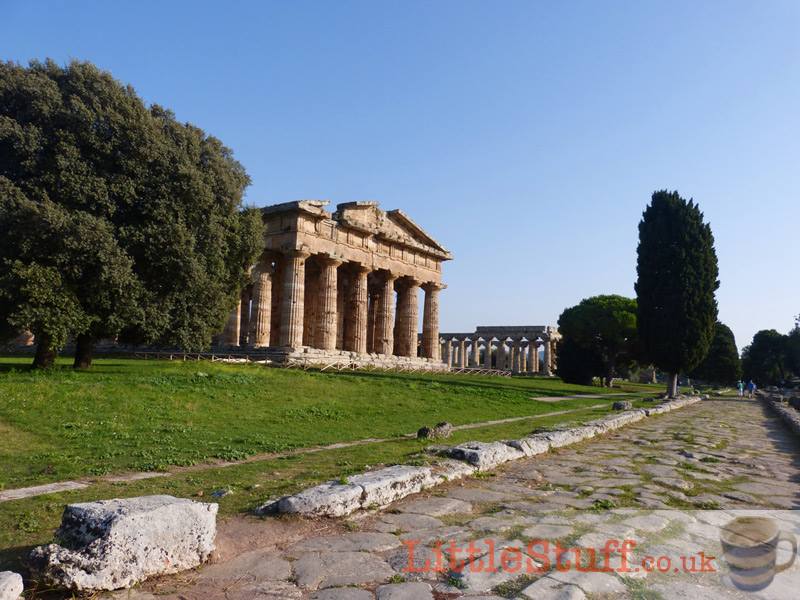 approaching the Second temple of Hera (c. 460–450 BC), treading where Romans trod before us…

The site itself is huge – we had expected no more than a temple or two left in a grassy area, but actually the entire town is laid out to explore with mosaics and flooring still intact. The temples themselves defied my brain’s ability to compute. How could something that old still be standing? They are huge, and wonderful, and I loved them. 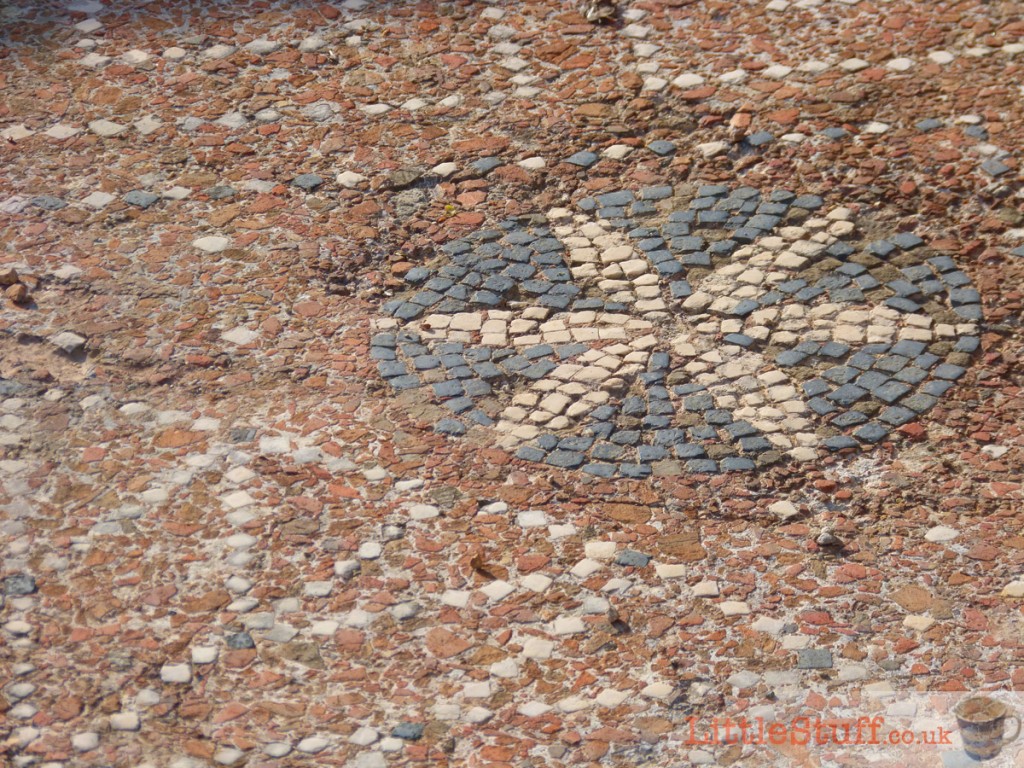 We kept walking into the remains of houses and finding ourselves walking on their mosaics. It’s astonishing how the history seems to feel alive and vibrant beneath your feet when you can be among it.

Sitting on a Roman kerb with my feet on the Via Maxima, lizards basking beside me in the heat of the sun which bathed my shoulders, it wasn’t difficult to feel the rackety echoes of two thousand year old voices and wagons and feet. 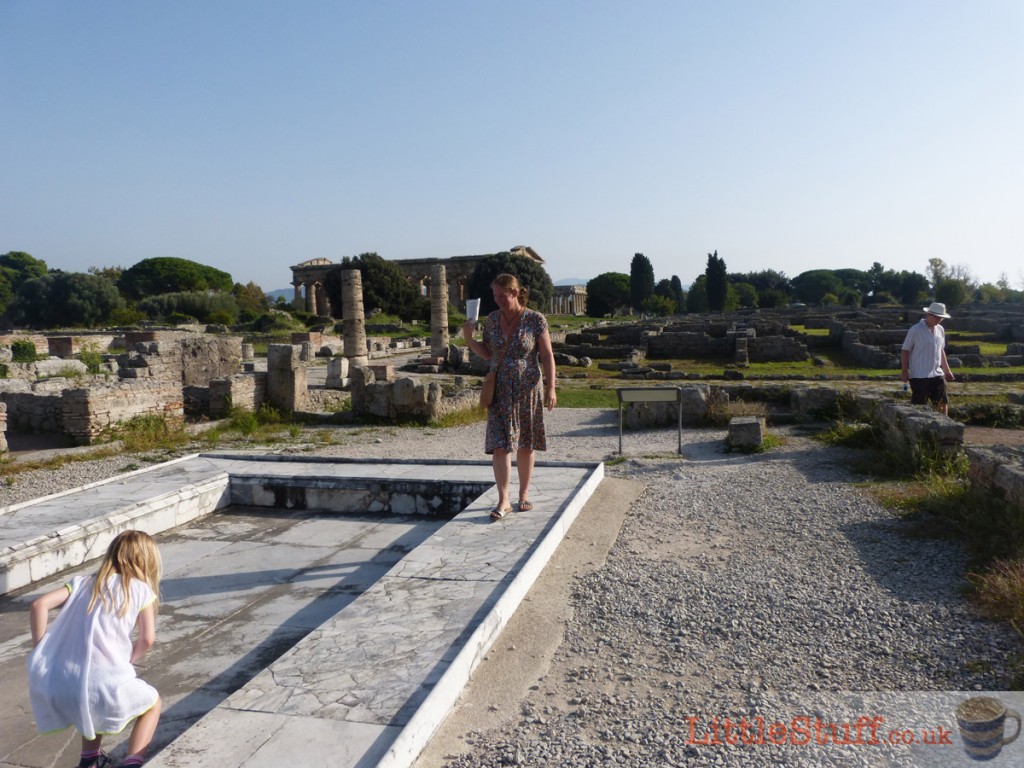 The children loved it when they could get among the remains, walk through and explore them as they wished, really understanding by touching and feeling a part of the history of the place.

We had only gone to Paestum to fill an hour or two. We ended up spending hours between the museum and exploring the huge site through the heat of the day. We walked slowly back to the campsite which had quickly grown on us, and decided that actually, it was far too nice a place to leave so soon. So we opted for driving to Pompeii the next day (an hour wasn’t far, and we had found excellent parking for Margot), and staying to enjoy the peace and seclusion of Dei Pini just a little longer yet… 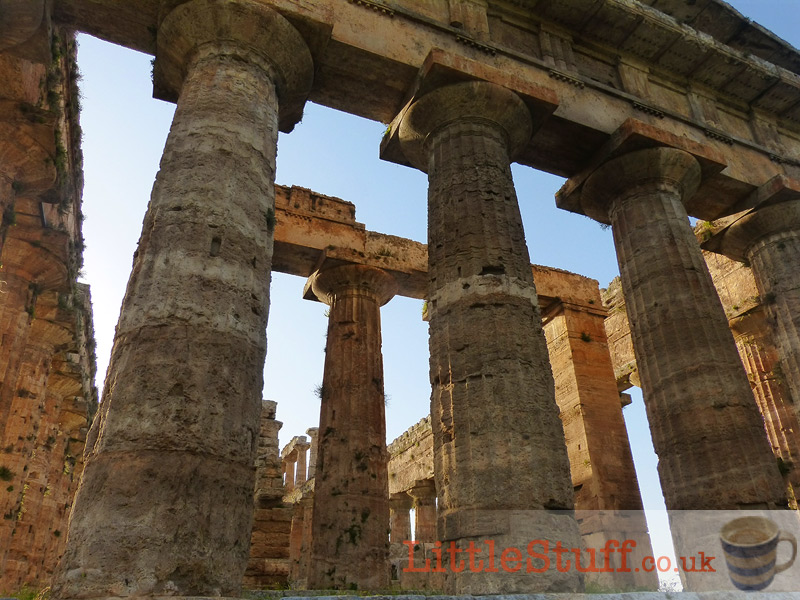 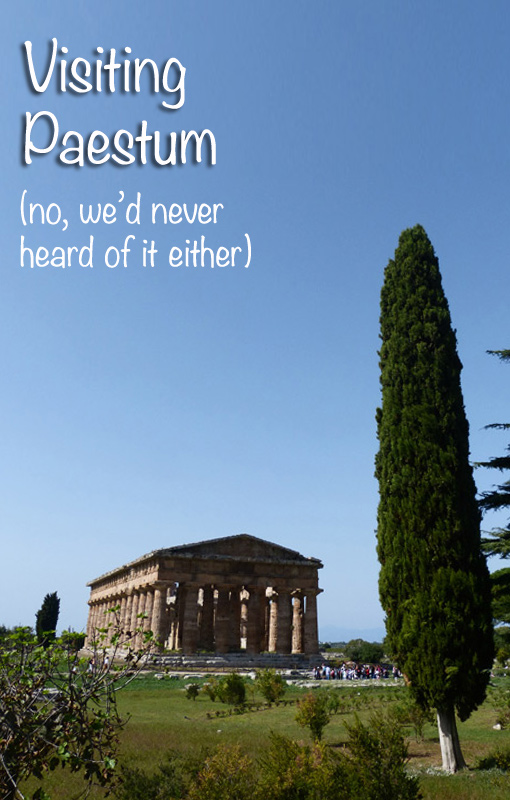