Snowboarding in the Cairngorms – about as much fun as you can have as a family.

While we were staying at Fisherman’s Cottage with One Off Places, we took Dora the Caravelle down to Aviemore one afternoon for an unforgettable afternoon as guests of The Snow School on Cairngorm Mountain. 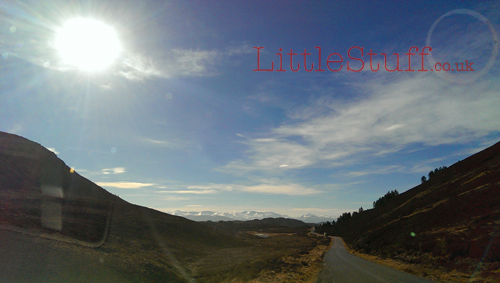 On our way… going snowboarding in them there mountains. Just LOOK at the weather!

The husband and I had tried snowboarding about 20 years ago on a dry ski slope, but we had a feeling that a 3hr private family lesson in real snow way up high on a mountainside might be a very different experience… The day dawned, and unbelievably, the weather was incredible; properly fantastic. We’re not talking quite-good-for-Scotland, I mean brilliant blue skies, no wind, and perfect snow.

We were booked for a family lesson to start at 1, so had to arrive by 12 to make sure we had got ourselves booked in and kitted up; thanks to Cairngorm Mountain we had not only the lesson, but the gear hire and mountain passes too (I thought an hour’s grace was excessive for putting on some boots… but it turned out they knew what they were talking about, it was just before 1 that we were finally all set and ready to go).

Once we had checked in and provided height, weight, shoe size and colour of underwear*, and been provided with everything we needed (the kit was excellent – good quality, well-looked after and perfectly fitted to our oddly-assorted body shapes and sizes) we met our lovely instructor for the afternoon, Craig.
He escorted us onto the Funicular train (we enjoyed the ride up, but I think the boys felt a bit cheated as they watched the skiers sliding up on the ski lift), and was kind enough not to laugh at our “Oooh!!!” faces when we reached the top and stepped out onto brilliant snow. We probably gawped and squeaked a lot, but I’m guessing the instructors are used to that. 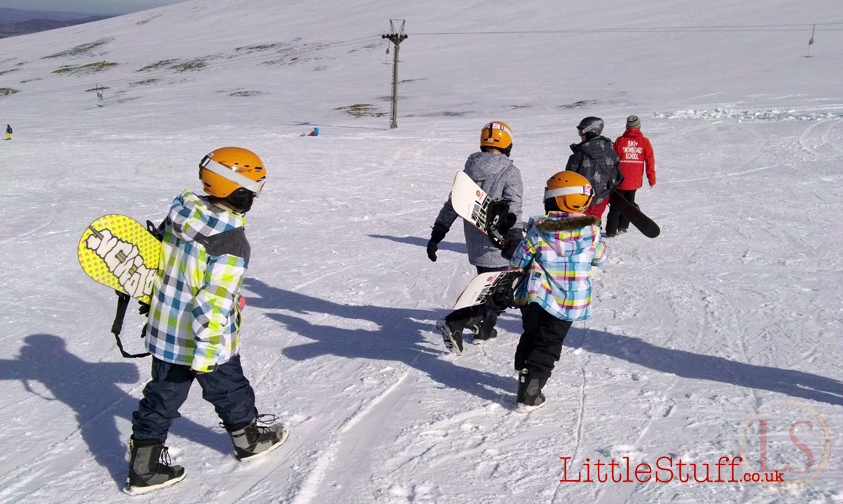 Making our way from the train to the nursery slope

We navigated across the busy skiing lanes and headed to the neatly formed huge bowl which is perfect for total novices like ourselves – easy sloping sides that aren’t too terrifying the first time you wobble up onto the board.

Craig was brilliant as a teacher; funny and encouraging, authoritative enough for everyone to pay attention, but fun enough to make everyone WANT to listen. 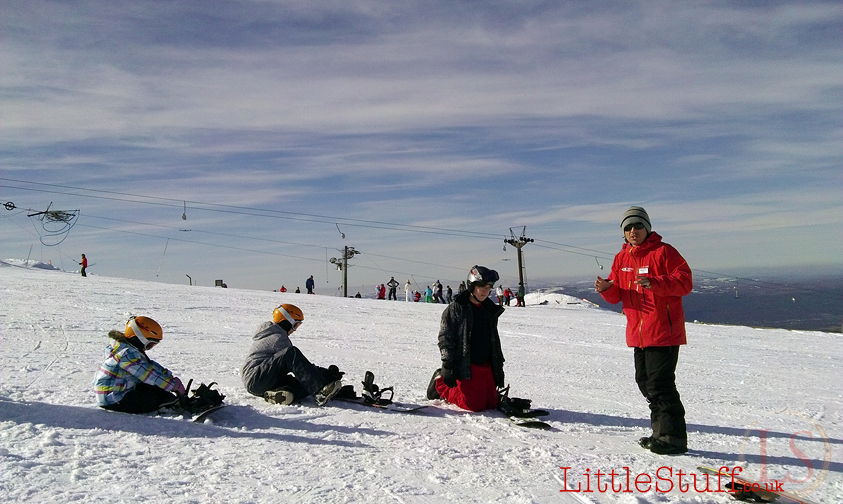 Family snowboarding lesson on Cairngorm Mountain with The Ski School

Having learned the rules of being on the mountain, and the parts of the snowboard (and yes he tested us!), we finally got up on one foot. But still no slidingy fun stuff… Oh no, first we had to learn how to stop, stay still, and work our way around the slope safely. Just turning around with a plank of wood strapped to your foot is surprisingly awkward at first, and I know Bear felt a little despondent at this point, finding it all a bit hard work, not much of the fun stuff and plainly struggling to keep up with her brothers. But Craig was very watchful, and swooped in and helped quicker than even an eagle-eyed parent could manage when they were encumbered by wood on their feet. 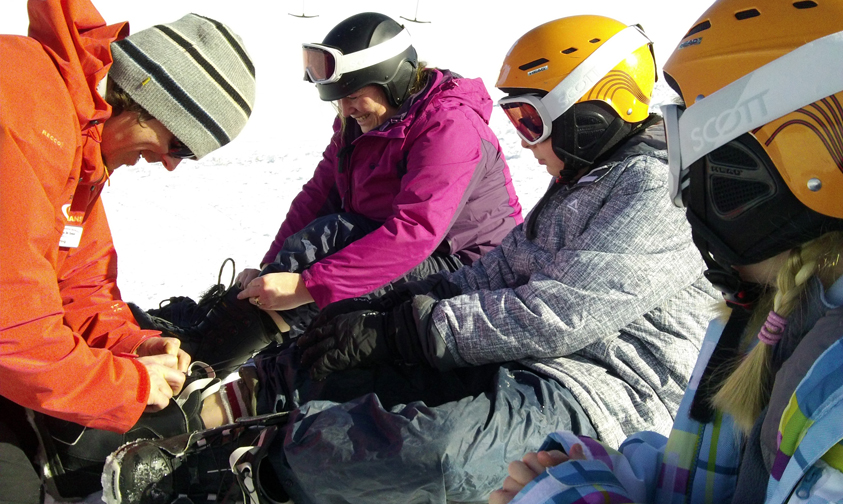 Last minute boot check before we started the slidey-stuff

Once we’d mastered all the basics (and made hideously hard work of scooting ourselves out of the way of an oncoming snow plough…) we were finally allowed to start slipping sliding trying to snowboard. Still with only one foot strapped to the board, we made an orderly queue and took turns to slide down a (really) short track with the board in a simple horizontal position, feeling secure with Craig standing between us and the rest of the mountain, supporting and advising one by one. 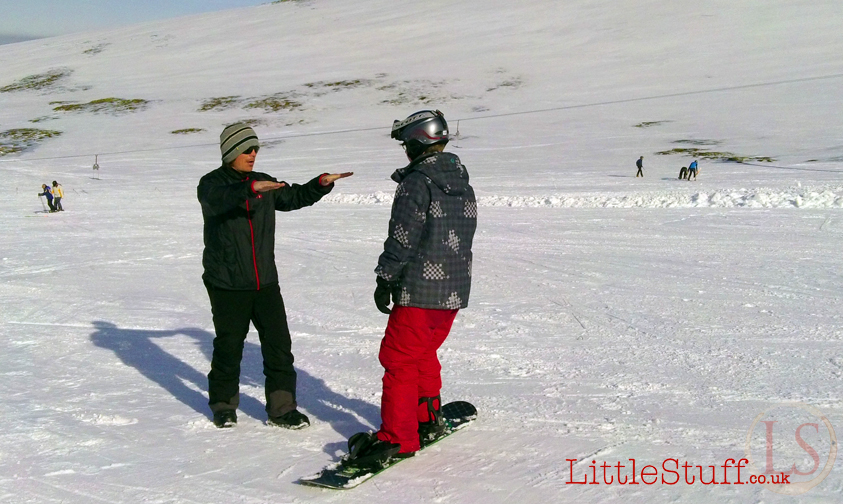 He’s not sporty, NO.1. – never has been.
But snowboarding? The boy’s a natural…

Some of us were better than others (no.1 was easing down with no assistance by his second attempt. Bloody teens), but none of us felt we were under pressure, or were particularly bad. Maybe that’s because we were just a family group, but we cheered Jolly’s first unassisted wobble as much as we did No.1’s confidently easy glide down a 40 foot run. And naturally the biggest cheer of all was when I went over on my backside. Again. 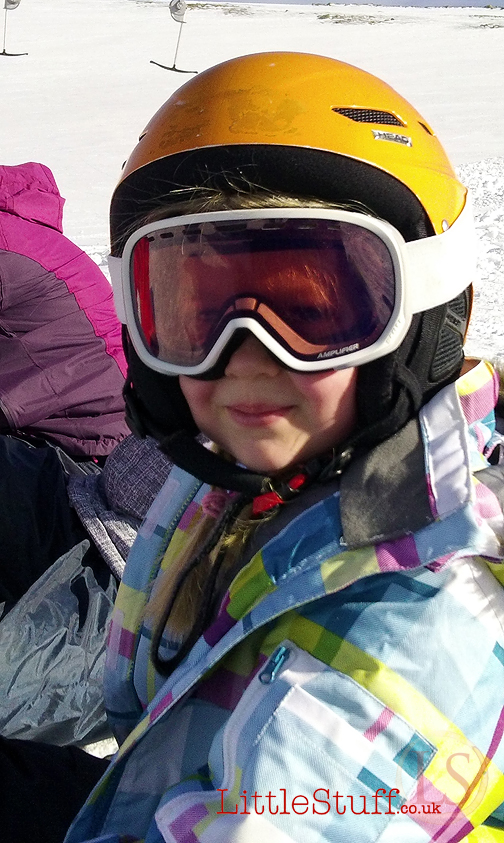 As the afternoon went on we all grew in confidence in simply handling the board and moving around, and we were increasingly eager to gallop back up the hill for another go. But Craig wouldn’t be rushed, and took his time with each of us so that we all felt we were learning as we went. 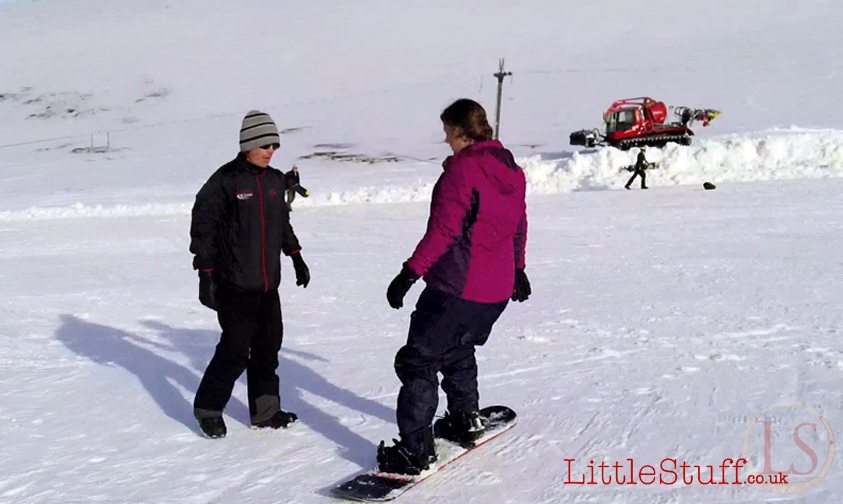 Having mastered the straight slide down (sssssh, I’m proud of that), trying out the turns was my finest moment. All of a sudden I felt in control; confident and sure of what I needed to do. For a brief moment, everything clicked, and I wasn’t trying to think of everything at once, my body just did what it needed to almost by itself. I felt like I was actually snowboarding (in a slow, awkward, tentative fashion), and the sheer joy of the moment was amazing. I know that sounds sappy, but honestly, I LOVED that feeling. Naturally, I pulled to a controlled halt at the bottom of the run, and immediately threw both arms in the air in an impulsive yelp of triumph.
And promptly fell flat on my bum.
Again.
I SO didn’t care. 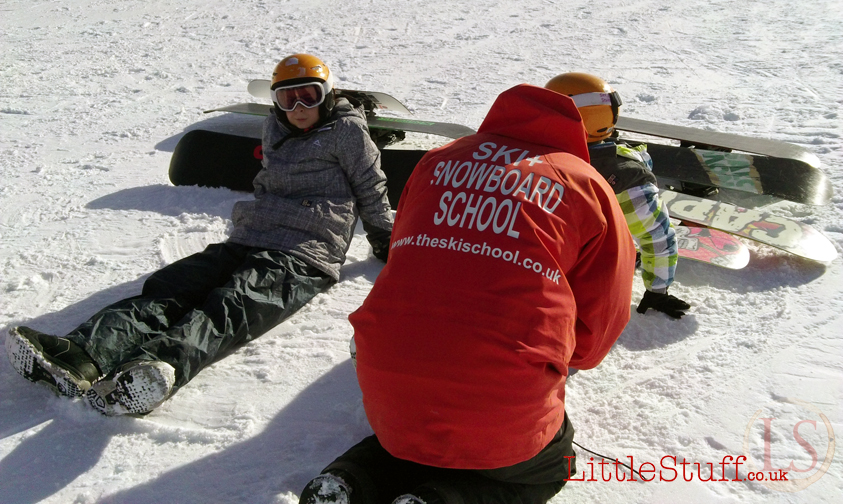 Mid-lesson re-boot break for Jolly with a painful foot – the ever-patient Craig to the rescue again.

Finally, at the end of our three hours, we had a short ‘Free Run’. The boys obviously headed up as high as they were allowed for a long run down. Boy sat, clipped his second foot in, extended quickly and gracefully to his feet unassisted and headed straight down, confident and loose limbed as he swooped and zig zagged back and forth, and had to land himself rather less gracefully to make sure he didn’t keep right on going back to the car park.
He hadn’t shown any confidence up till that point, and we all whooped and cheered in admiration.

No 1, who had been the boss of us all afternoon, asked that I filmed his final run, his crowning moment. Naturally, the minute I had the camera in hand, he collapsed into a sequence of ungainly heaps, and only when I turned it off did he manage to board the rest of the way down in a rather disgruntled manner – but without further mishap. 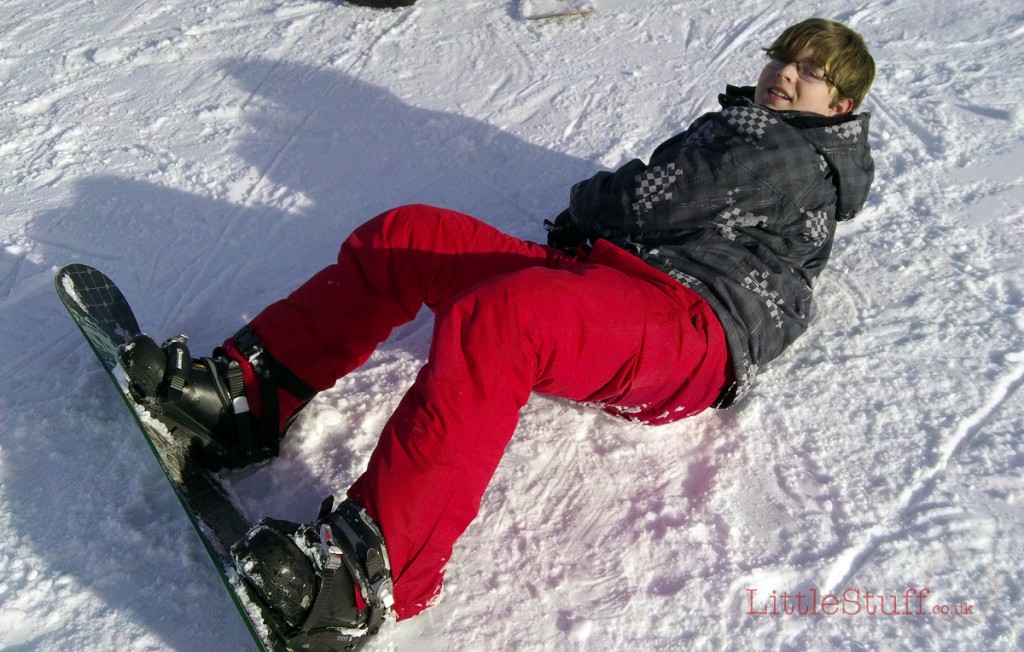 No.1 ruefully acknowledging that it was bound to happen as soon as the camera was pointed at him…

In the meantime, the not-so-confident Jolly hadn’t gone any higher, but had got up on his feet by himself, and after a wobbly start managed to start slowly and finish with a magnificent, hand-to-the-ground, side-sliding flourish.
Bear held on to Craig for a double run down at a speed which left her breathless and starry eyed with Happy.
Which left the husband and myself. Me, having used half my free run time watching the children, spent the other half actually trying to stand up. Pathetic. Craig finally took pity on me, helped me up – and I stood confidently, ready to go. I slid a full 5′, squawked in terror, and fell flat.
Again.
I know, it’s a gift.

The husband, on the hand, refused to flail awkwardly and cheated, flipping onto his knees and making it onto his board backwards. He then jumped round 180 degrees till he was facing the right way (I know, shocking behaviour), and zoomed off. WAY too fast, if you ask me. Which he didn’t. He was too busy boarding. The git.

Sadly, that was our time up, and we had to head back to the train and make our way down the mountain the slow train way. 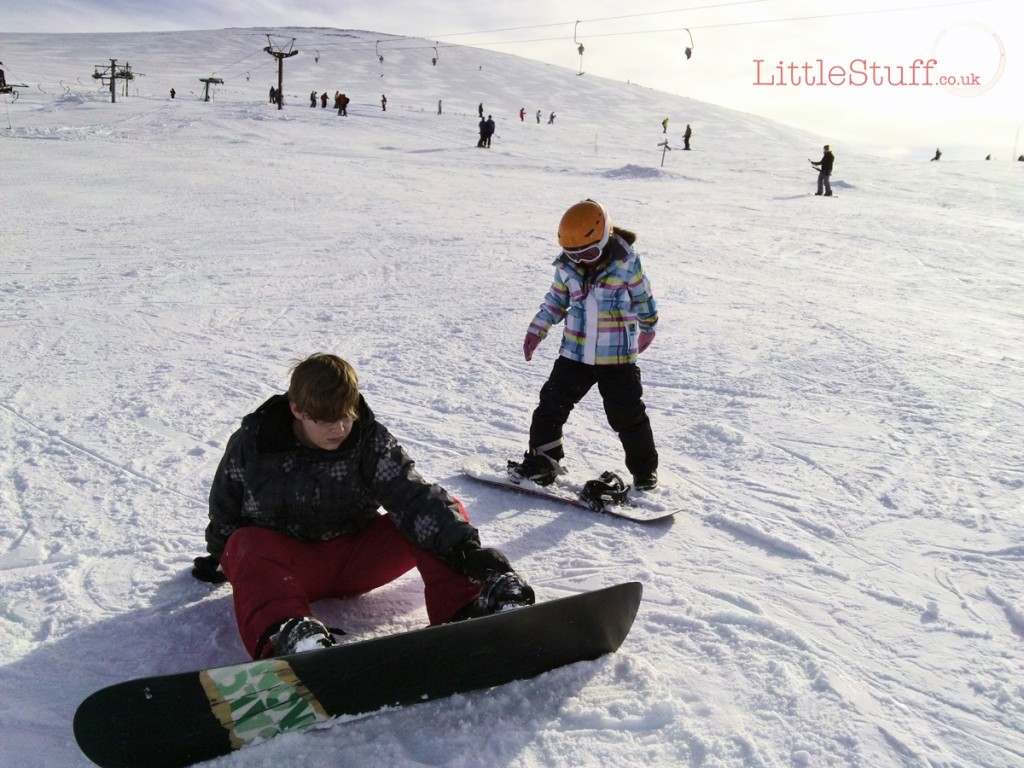 Bear telling no.1 just how good she’s going to be…

We were genuinely buzzing. I know we’re utter novices, and saying we can snowboard is ridiculous. But what we can do is say how much we loved every single second of repeatedly falling on our backsides (and in one particularly spectacular episode of my own, fully flat on my back with a loud “OOOMPFF!”), and the brief glimpses we got of how great snowboarding is going to be (thanks to the patience and excited encouragement of Craig) simply made us want to go back again and again again. So watch out Scotland. Next year it’ll be the Hitchcock Family smugly zooming down the mountain and slicing obnoxiously through the gaggles of nervous learners (if we were ever to be quite so rude. Which we obviously wouldn’t. Unlike some we saw).

So the hugest of thanks to Cairngorm Mountain for inviting us, and to the immensely brilliant Ski School for the tuition, and lastly to Craig for the endless patience, kindness, tact and enthusiasm which simply gave us the best afternoon any of us can remember (And Bear says when she’s on the Winter Olympics team, she’ll tell every interviewer that you taught her everything…).

We really cannot recommend  the Cairngorm Mountain Snow School highly enough – if like us you’ve been fired up by the Winter Olympics, and are desperate to give it a go, then now’s your chance. The season is still open, and a family lesson is simply an awesome way to start out – as we were all beginners doing the basics together really helped us, and it was a family activity we’ll remember for a very long time.
Just those 3hrs on the mountain gave us a personal introduction to what is obviously going to be a lifelong love for us all. 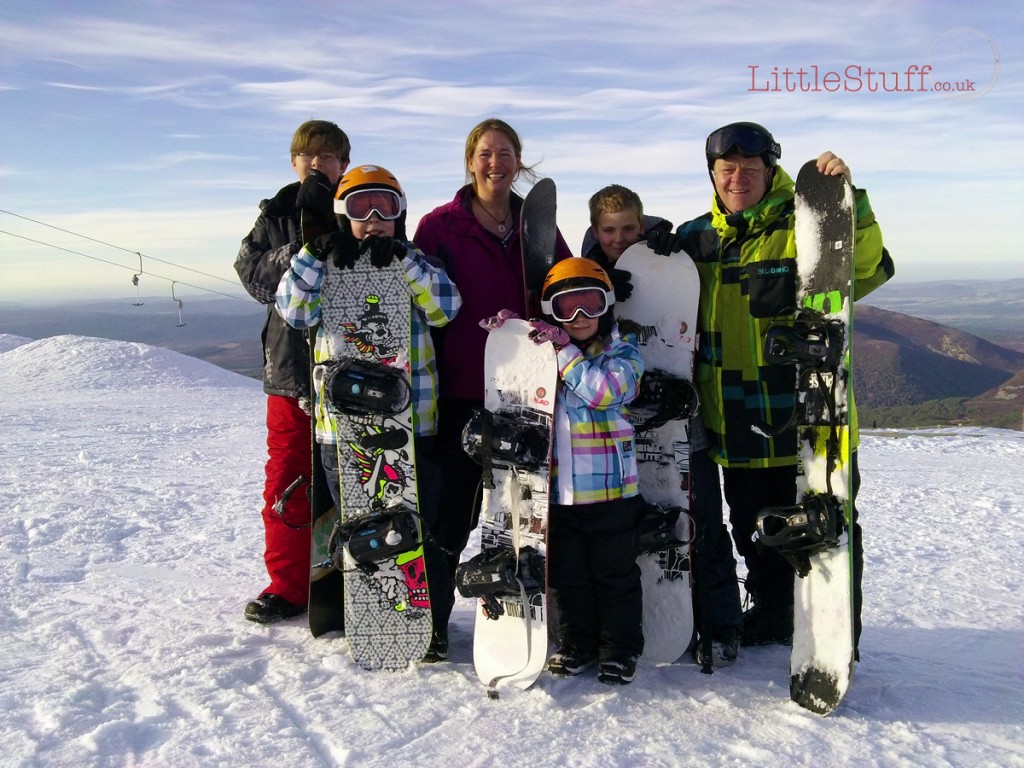 A rather happy Team LittleStuff!

Hiring your gear makes sense initially, though I’m pretty sure that buying your own would work out cheaper  (I have a friend who takes her kids skiing every year, and while they’re growing she simply scours eBay for this year’s salopettes) if you were to go anywhere near regularly.

Cairngorm Mountain:
Snowboard & Boots Hire is £24 for adults, £17.50 for juniors – we used our own waterproofs/ski jackets, gloves, and helmets are free.
Day Passes – £90 for a family of four (we had two extra juniors, so £130 for us)

It quickly adds up doesn’t it?  That’s £418 for an afternoon. But of course we had the personalised Grand Tour – it’s far cheaper to join existing classes, and there are even better deals if you’re staying for a few days and buy a package rather than a one-off. And obviously once you have mastered the basics, getting out and practicing doesn’t cost you in the lesson fees.
However, we’ll be saving very hard to drive all the way up to Aviemore (actually, we’ll probably see if we can book the perfect Fisherman’s Cottage again, it’s only 45 minutes away, and we do love it so) to move on to Level 2 snowboarding next winter. It was so unspeakably brilliant I simply can’t imagine not going again.