Brittany Ferries for our #ItalyRoadTrip. Brilliant – as always.

The last few years we’ve been lucky enough to travel with Brittany Ferries to France. Thankfully they put the Barfleur back on the Poole Cherbourg crossing (the Condor Express and I had a little up-and-down relationship a few years back…), and not only does the ship calmly plough through most of the weather we’ve seen without much roll, but we also get a cabin. Which is brilliant, and absolutely worth the additional £31 a crossing – the ability to have our own space to stretch out, to snooze, to kick our shoes off and lie on the floor – well, that’s not to be underestimated. 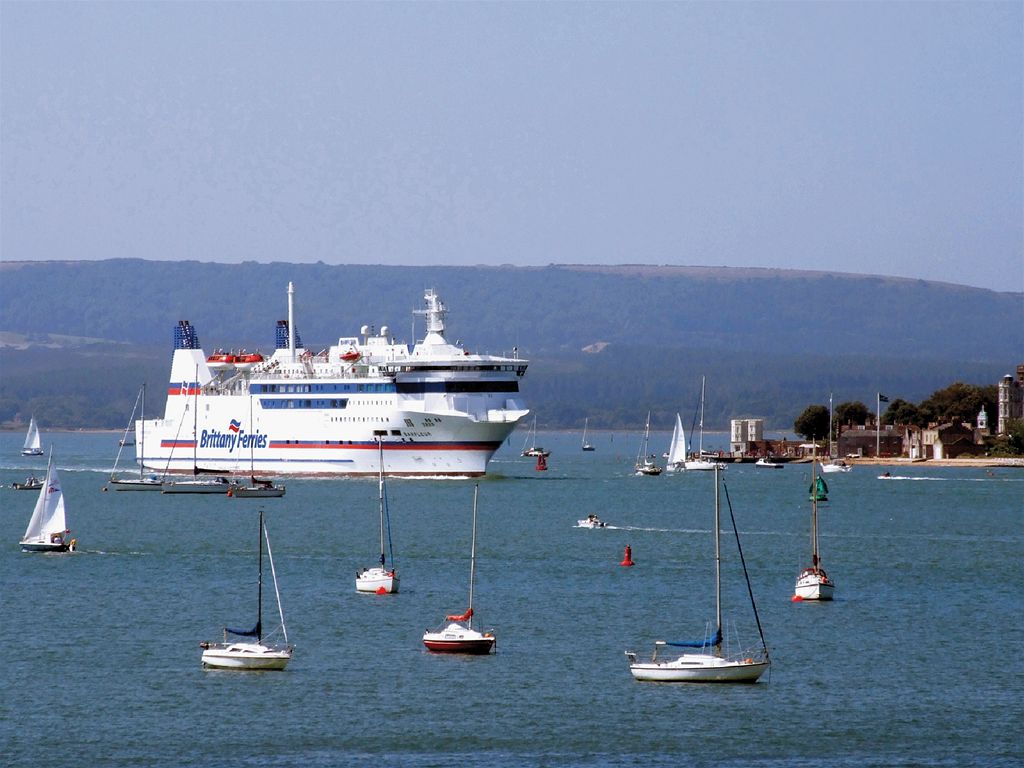 Going out you tend to have an early crossing – we’re lucky that we live only 40 minutes form Poole, so the 7a.m. check in wasn’t too painful for us this year, but in previous years we’ve been up long before the dawn. Having three hours to catch up on some of the napping really makes that first day’s journey go MUCH more smoothly.

Once we’d loaded Margot (first time we’d driven her into a height-restricted area… we winced and grimaced as we checked the ceilings, but obviously we cleared easily) and climbed to the right deck and navigated the perpetually confusing corridor layout to our cabin to drop our bags (okay, I admit it – it does only seem to be me that gets foxed and just stands bewildered by the customer services desk, spinning slowly on one foot whilst I try and figure out which way I should go until one of my children takes my hand and leads me onwards) we headed for the open air – we traditionally wait until we’ve cleared the coast of Dorset before we go down and find some breakfast and the onboard shop for the essential item we’ve just realised we’ve forgotten. 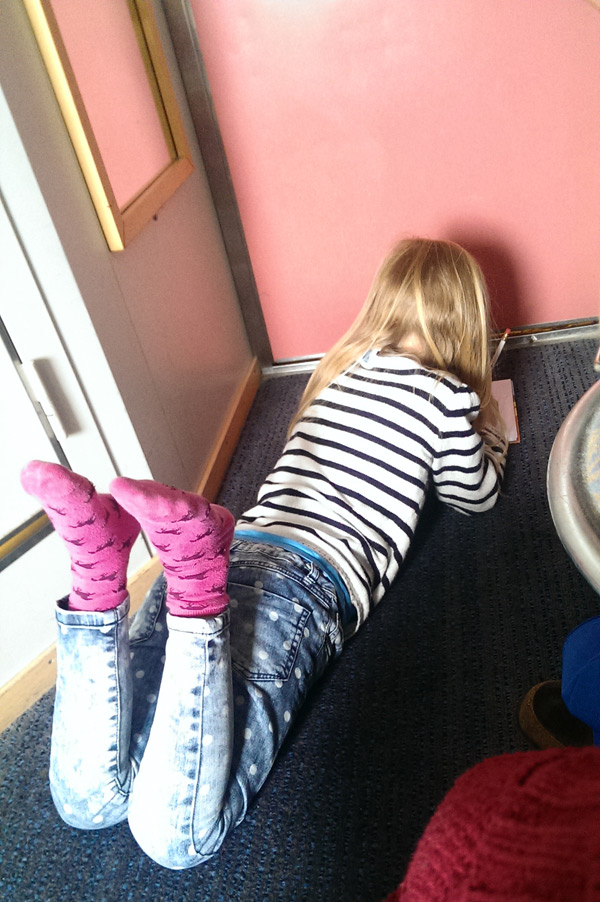 Bear making full use of the cabin floor to stretch out in her socks.

The self-service restaurant is a reliable affair – offering a wide range of breakfast to please most people on the early crossing. Pretty soon five plates of a Full English (bargainous at £4.95) were being consumed with much gusto (and the traditional good-natured family trading of eggs for bacon for sausage for toast), whilst the daughter tucked happily into croissant and yoghurt.
Not so happily, she also chose the first day of our trip to see how far she could suck her top lip (really hard) into her glass juice bottle, giving her a really very purple  lovebite-moustache which would last all the way to Venice (oh-SO-amusing to her brothers. Me? Notsomuch.)  *sigh*

Then we just had a couple of hours to stretch out in the cabin – the older boys bagsied a top bunk each, the husband claimed drivers rights on one bottom bunk so Jolly and I shared the other whilst Bear stretched out happily on the floor. It was all very peaceful and still (except for No.1 crunching on M&M peanuts. Which wasn’t irritating at all), and gentle snores may have begun to echo from all four corners of the cabin. Before I knew it the tannoy was announcing that we were approaching Cherbourg and thanking us for being on board. Well, quite frankly it had been our pleasure. 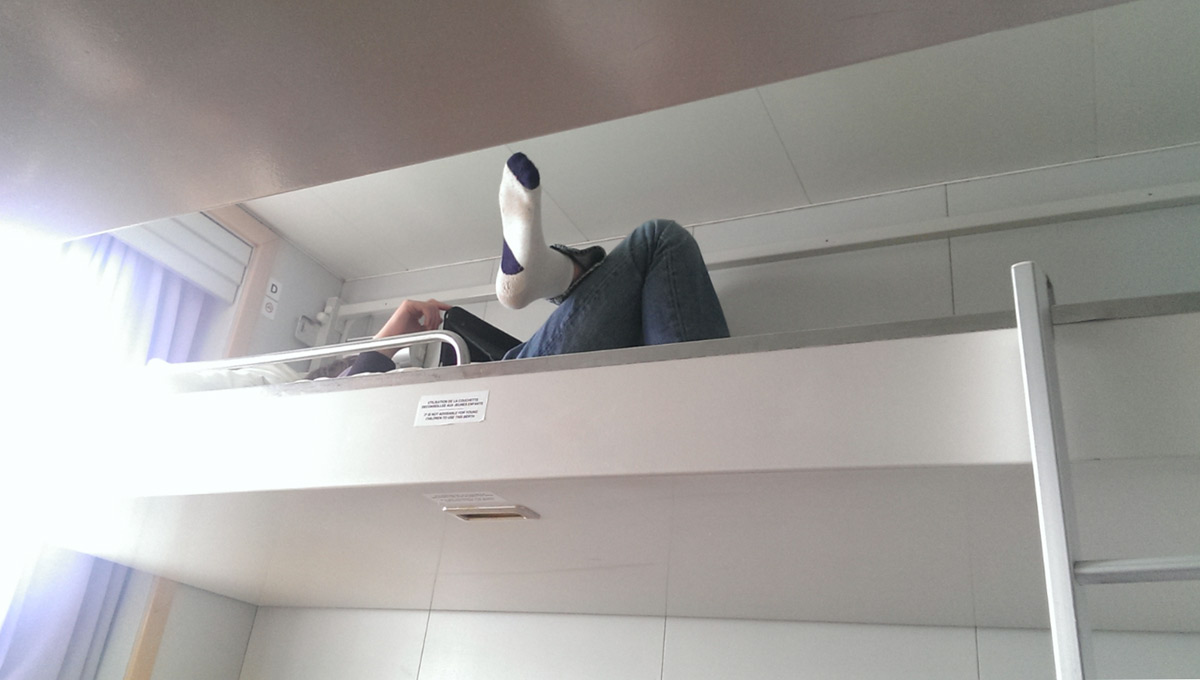 Boy in his top bunk – he folds it down and bagsies it before all six of us have got in the door of the cabin. He loves this part of every holiday.

The return trip four weeks later was a little more eventful, in a less pleasant way. We whisked across France and arrived at the port with hours to spare – which was fine in Margot, as we had a place to sit and stretch, and a cafe and toilets on hand in the terminal (and free wifi; we didn’t see the teens for dust). Loading Margot was tricky, thanks to her low undercarriage combined with a particularly steep entrance ramp, but we succeeded without serious mishap, and headed for the exact same cabin we’d travelled out in – hardly able to believe it had been almost a month since we were last on board. Walking through the ship I noticed sick bags on every available surface, and thought it odd that I had never noticed them being so prominent on previous trips. Then I understood that maybe they’d been put there especially for this trip… gulp. 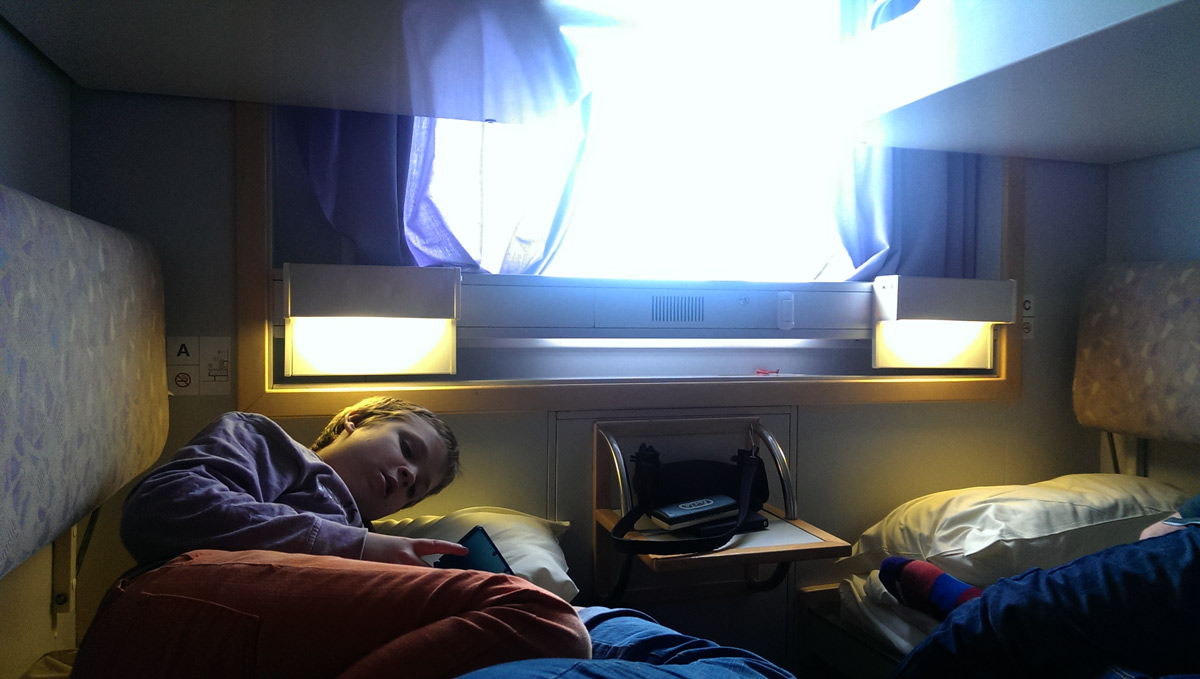 Jolly not enjoying the start of the rolling as we leave Cherbourg.

As we left the safe confines of Cherbourg’s harbour walls, I realised that yes, they probably were just for this trip. 15 minutes after sitting down in the cabin, the husband needed another burst of fresh air (his stomach doesn’t handle rolling seas very well), and when we got back we found No.1 was also looking a little pale. We decided that we’d all feel better without an empty stomach, and went to find some dinner. Which did seem to help No.1, but made me feel decidedly queasy, and Jolly took two mouthfuls before his stomach decided that just one more bite and it wouldn’t be held responsible for the consequences.
Heading to the deck for some welcome gulps of fresh air, poor tearful Jolly clamped to my side, the crossing felt like it was going to take a Very Long Time Indeed.
We cowboy-staggered back to the cabin, and curled gratefully up on the beds. Boy took Bear up to the top bunk to watch Frozen on the tablet, and I curled up around the very sad Jolly, soothing his forehead, and trying to ignore the gentle lurching roll of the ship. Somewhere along the way the pitch became less sickening and more lulling, because once again we all dropped off to sleep, and for the first ever we didn’t watch England slide into view at the end of the holiday, the tannoy waking us all just as the lights of Sandbanks and Poole Quay appeared beside us.

We can’t blame Brittany Ferries for the sea. But I can certainly thank them for the place to sleep, for the stress-free check-in and fast, simple unloading, for not having to think about what luggage to take (if it fits in the vehicle, it can come)… and Jolly would like to send a personal thank you for not crashing in the sea or letting him die from a fatal case of seasickness.

And our love affair with Brittany Ferries will surely continue – we just love it. Quite simply, for us the holiday starts when we get up in the dark and head to Poole; the Brittany Ferries Barfleur check-in is where the adventure begins…

(the cost for the return trip, including six of us plus Margot the motorhome, was £690 in October; in a normal family car that would be down to £420. The outside large cabin’s state they are only 4-berth, but we never have a problem fitting all six of us in one.  You can book online with www.brittany-ferries.co.uk and the booking number is 0871 244 1400.)

And on the return trip you’ll no doubt get to Cherbourg long before your ferry starts boarding. We usually stop at one of the Normandy beaches for a few hours, but Karen over at Mini Travellers has some brilliant suggestions for things to do with the kids near Cherbourg while you’re waiting for your ferry.