Ghyll Scrambling in the Lake District – sheer brilliant madness, I tell you!

I eyed the drop off the ledge and tried to work my feet slightly closer through the water without slipping. Jeepers it was high.
No. 1 son turned, flashed a grin, took a deep breath and leaped confidently off into the swirling narrow channel below.
Well, he would wouldn’t he?

Unbelievably, frightened-of-heights Boy stepped up next. He nervously eyed the drop, fixed his eyes on the security of Phil’s reassuring face on the rock below and demanded a count down. I stepped back to allow him the room he’d need when he decided not to leap… And then he leaped with a yelp. 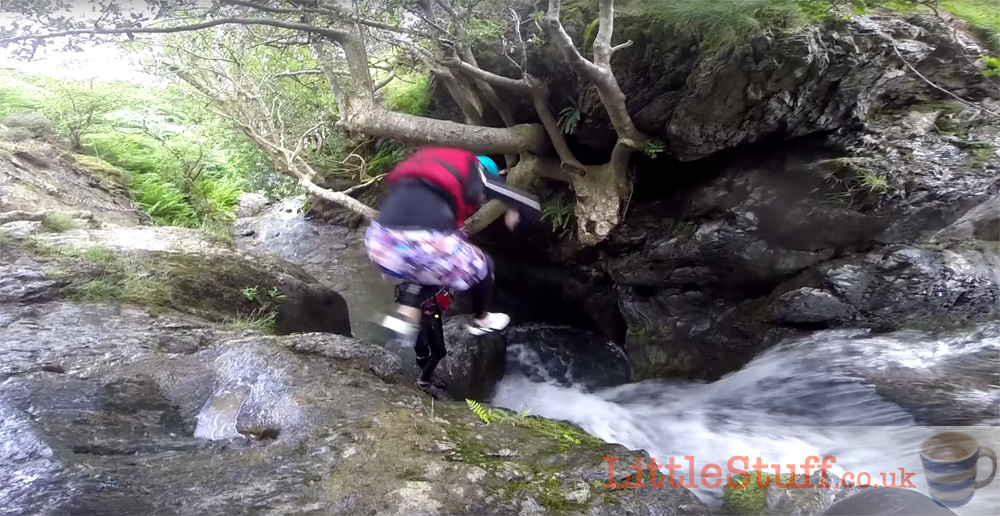 Boy, leaping into the abyss (way down in the dark under the overhang you can see the circular curve of the pool he’s jumping into).

WHAT was going on?
Bear didn’t even flinch of course. Our fearless 9yr old barely took a look before she jumped off too. Floundering in the fast deep pool below for a second before her big brother hauled her to safety.
Just me left then, husband and 13yr old Jolly had both already opted to walk around. I stood at the edge and looked. I took a deep breath and gulped. Looked again, and couldn’t help giggling nervously. Idiot.
I edged closer still, praying I wouldn’t slip at the top of the mini waterfall… took a deep breath and… 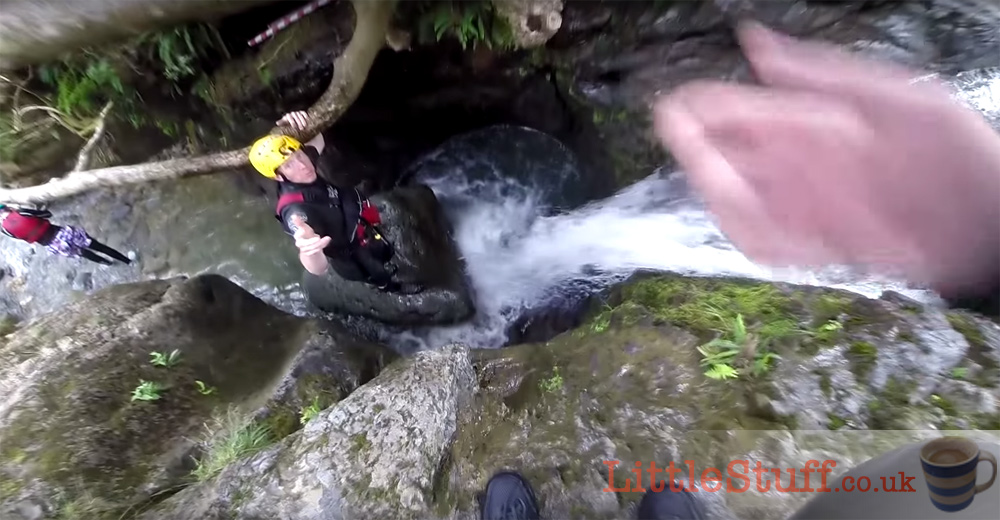 Phil’s being very reassuring half way down. *gulp*

I chickened out.
Dammit.
We were ghyll scrambling in the Lake District for the afternoon, in the amazing care of Phil from Quest4Adventure. Our family of 6 all swim, but we have three not good at heights, one not confident in water, a 17yr old ready for the next adrenaline rush and one Captain Fearless 9 yr old who’d be inclined to launch herself off or at anything. Finding activities for us all can be tricky, and I hadn’t been sure this was going to work out. 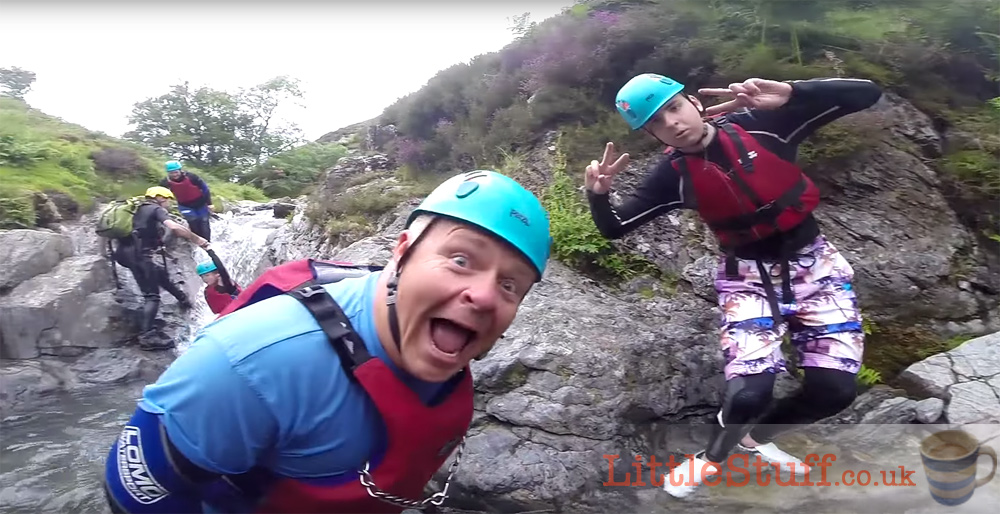 But Phil’s easy relaxed confidence reassured the nervous ones, and the fact that in this particular ghyll they could walk around anything they didn’t want to face made everyone feel confident and comfortable.

We helped each other scramble into the wetsuits, donned our new footwear (NB you’ll need old shoes for ghyll scrambling. We’d packed just our hiking boots and one pair of ‘good’ shoes each for our trip – and we had Skiddaw-beating plans for the next day, and really did not want wet boots for that. In the end we drove out to the coast in the morning to find an Asda, investing in some cheapie trainers each. They weren’t ruined, just very wet!). 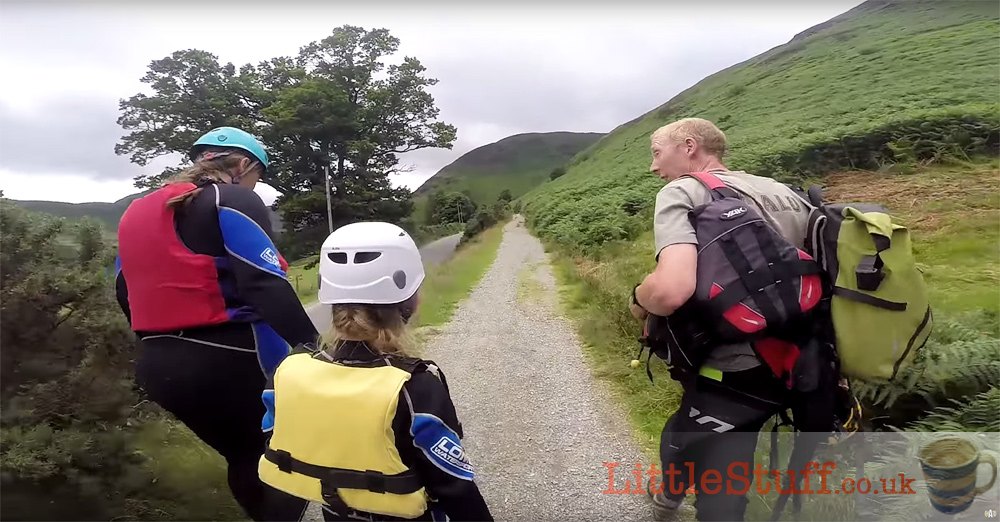 The glamour of a wet suit doesn’t get better when you’re on dry land, slogging uphill in the heat…

The walk up the hill to the starting point was hot in the suits, and we were all glad to finally step into the stream, looking forward to the coolness. We started right away with a slide – literally a smooth channel slide down rocks on our bottoms amid the rushing water, landing in waist deep water. 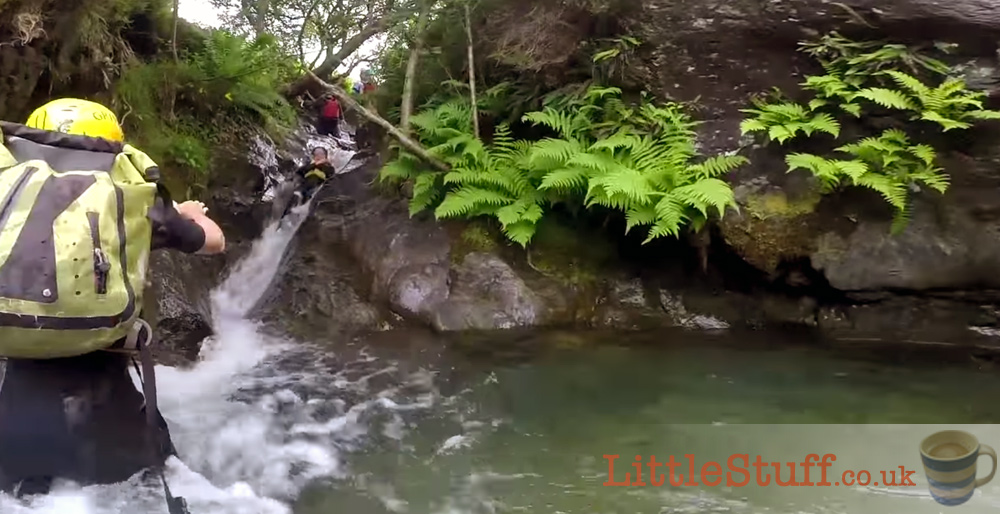 I watched as my brood hurtled down ahead of me, confident laughs, nerve-ridden shriek and a loud wahoooooo! from Bear. I went down after them, and couldn’t help a stupid squeak escaping as I landed neatly and then promptly sat on my bum in the water. Elegance, this day will not be yours.

I turned to watch the husband, knowing his nerves; he finally conquered a lifelong fear of water and learned to swim last year, to the whole family’s bursting pride. But he’s still cautious, and sliding through a current into unknown depths is not his idea of a good time. But he wasn’t to be outdone, and he slid through, giving me a tight and relieved “I did it!” grin as he surfaced. 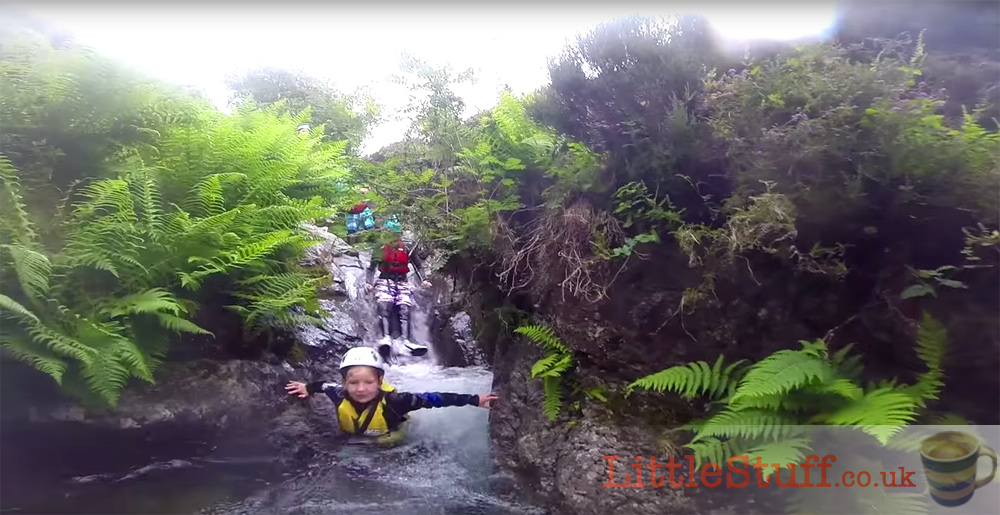 We slowly navigated our way down the ghyll, sliding, jumping, splashing and wading our way. More than a few invisible holes and rocks snagged me, and I seemed to spend far more time than anyone else trying to leverage my floundering body back upright again.

Then we came upon THAT ledge. It felt high – though probably less than 10 ft, but when you’re standing above, and you have to jump out into a specific and small area of churning water, avoiding the boulder beneath you at the same time as you avoid the overhang from the opposite bank coming out towards your head… 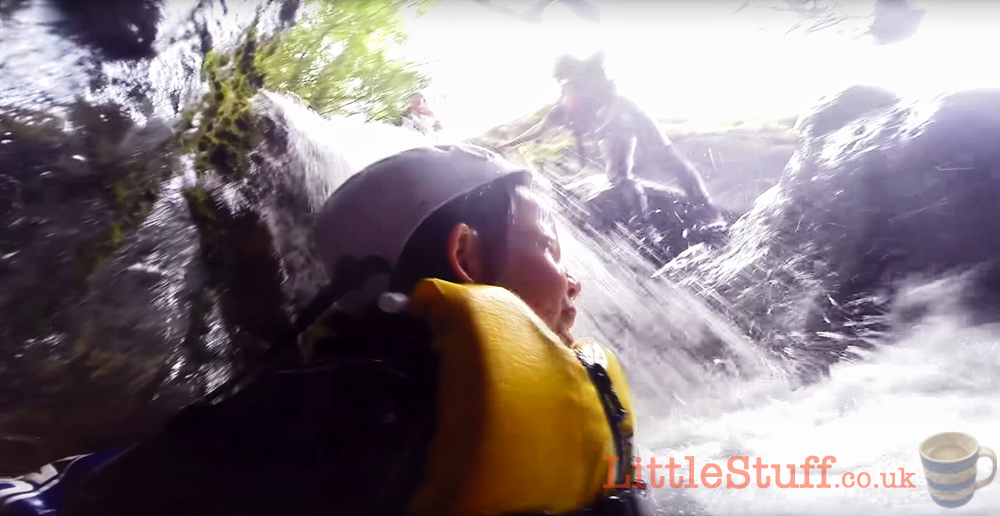 Bear spluttering to the surface – you can see Phil standing on a rock halfway up, and above Bear’s helmet you can just see me peering down

I’m ashamed to say my 9yr old was braver than me, and yes I chickened out, taking the easy way down.
SO cross at myself.

We carried on downwards, and ended the ghyll with the best leap of the day. A long narrow channel between two smooth shoulders of high boulder – and we had to leap face first to do a belly flop into the channel. I wasn’t absolutely sure my generous proportions would even fit in the narrowness, but I was damned sure I was making this one. I watched all my brood leap before me, and even Jolly-the-cautious made it with a happy roar of triumph. I stood at the ledge, took one look and a deep breath, then threw myself forwards with a highly undignified shriek. 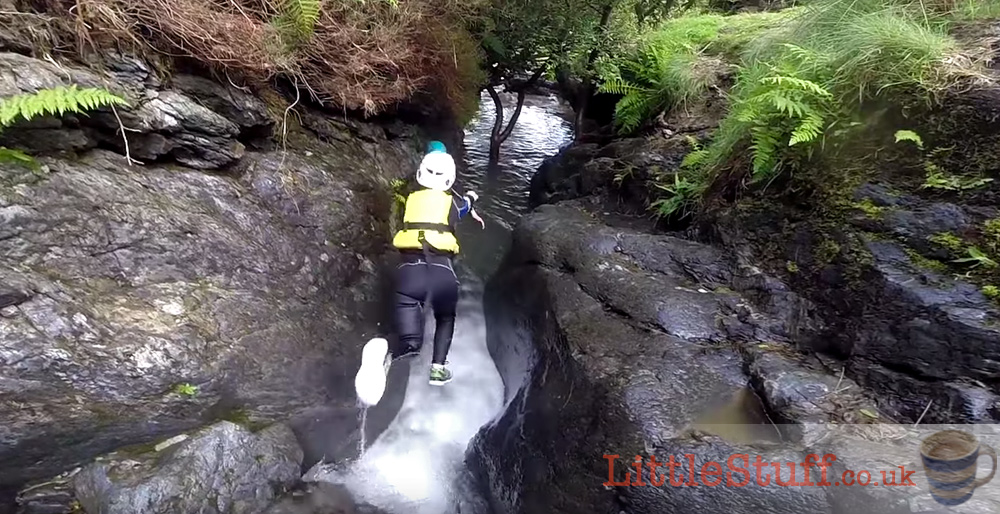 Yes that’s Bear again, not me. But imagine her more generously proportioned in every direction, and you get the idea…

I bloody did it! Naturally undignified floundering followed as I regained my feet, but I did it!

Then I turned to see the husband teetering on the edge – which is not where I expected him to be. He should have walked around, surely? But there he was, muttering to Phil who was clearly being very calm and reassuring. And as I watched, my man who does not do water threw himself in.
Face first.
Into that narrow churning channel.

The whole family cheered as he got sheepishly to his feet, looking justifiably proud and a little astonished at himself. 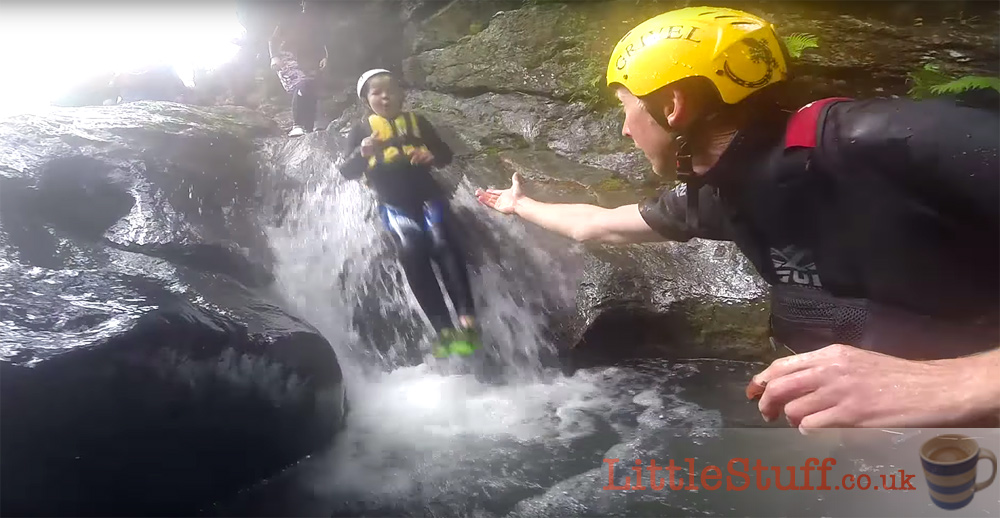 Phil checked his watch, and assured us we had time to go again if we wanted… Oh man, did we?!
We hustled back up the bank path to the first big slide, and threw ourselves down the stream again.
And that big leap that beat me? I watched husband and Jolly calmly pass it by, but thought I’d give it another look.
I stood on the lip, nervously breathing and trying to decide. Then wondered how on earth I’d live it down if I didn’t. If No.1 son at 6’2″ had managed it without cracking his skull on the overhang, there was no reason that I should.

And then my legs jumped. 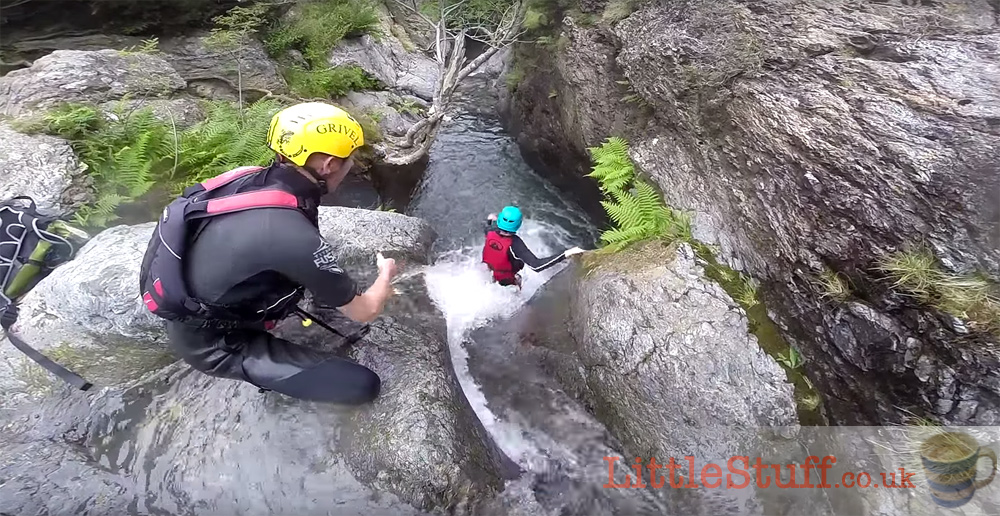 I changed my mind about a nanosecond later… But it was too late. And quicker than I could scream “I didn’t mean it!” I was landing (on my arse, naturally) in the gravel at the bottom of the deep whirling pool.

I only bloody did it!
Much surprised cheering greeted my ears as I surfaced… And then my triumph faded as I needed two strong men to haul me out of the swirling water onto the boulder above me.
Elegant, like I said. 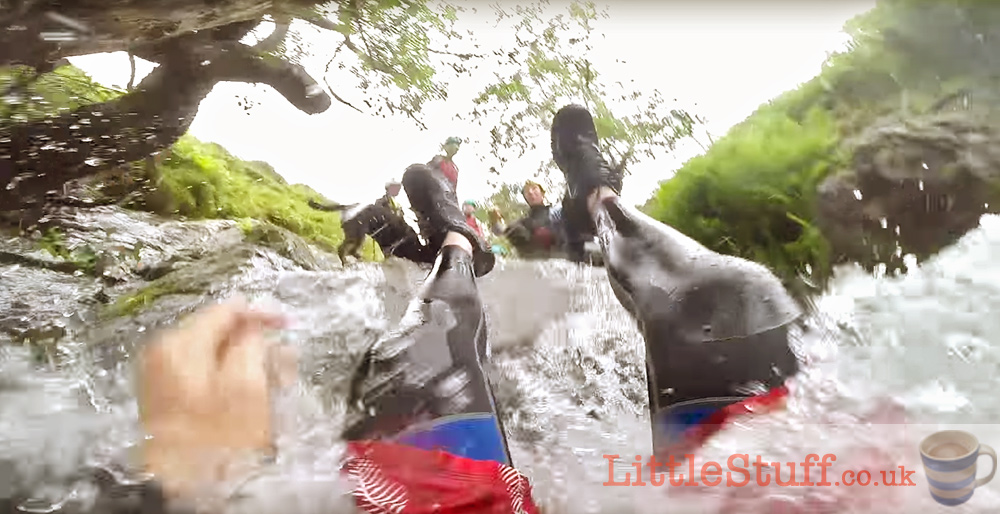 We worked our way down the stream again, safe in our new boldness. No.1 did a big slide backwards, we leaped off ledges and hurled ourselves down the slides, chattering and laughing (and kindly hauling me to my feet time and time again… WHY couldn’t I land a slide on my feet? Every single time my knees buckled and I sat down.).

Yes, that’ll be me, surfacing. Again.

Honestly – we had such a good time together. It’s only a stream in the Lake District – but for us it was a total blast of an adventure. It was exciting without ever feeling dangerous, and was just so much bloody fun. I cannot recommend it enough – we’ve been talking about it ever since, and are determined to do it again (often as we can!).

The National Trust’s Lake District Gorge Scrambling can booked with Quest4Adventure, and costs £25 per person. We actually enjoyed the Stoneycroft Ghyll experience which is located nearer Keswick, and costs £30 per person. Everything’s provided for you except the shoes (and like I said, they won’t get ruined, just wet!).

We followed up our experience with a double adventure – see here for our Moonlit Canoeing on Windermere. It was probably the very best way to round out an impossibly perfect day.