Following our brilliant afternoon ghyll scrambling in the Lake District we grabbed a bite to eat in Keswick (amazing burgers – and one ‘mac & 4 cheese’ – from Bar Metro – TOTALLY recommended, they were brilliant) and headed down to the National Trust’s Low Wray campsite  to meet up again with Phil; we had plans for some moonlight canoeing on Windermere.
I had been excited about this trip ever since I read about it – what could be more romantic than canoeing in the moonlight on the edges of Windermere? Now I’ve had these plans in my head before, but when you factor in four children and the British weather it never quite works out as planned. But for some reason, this time the Universe agreed with me – in a change to the grey mizzly dampness we’d had all week, the skies had finally cleared, and we looked set for a glorious evening. 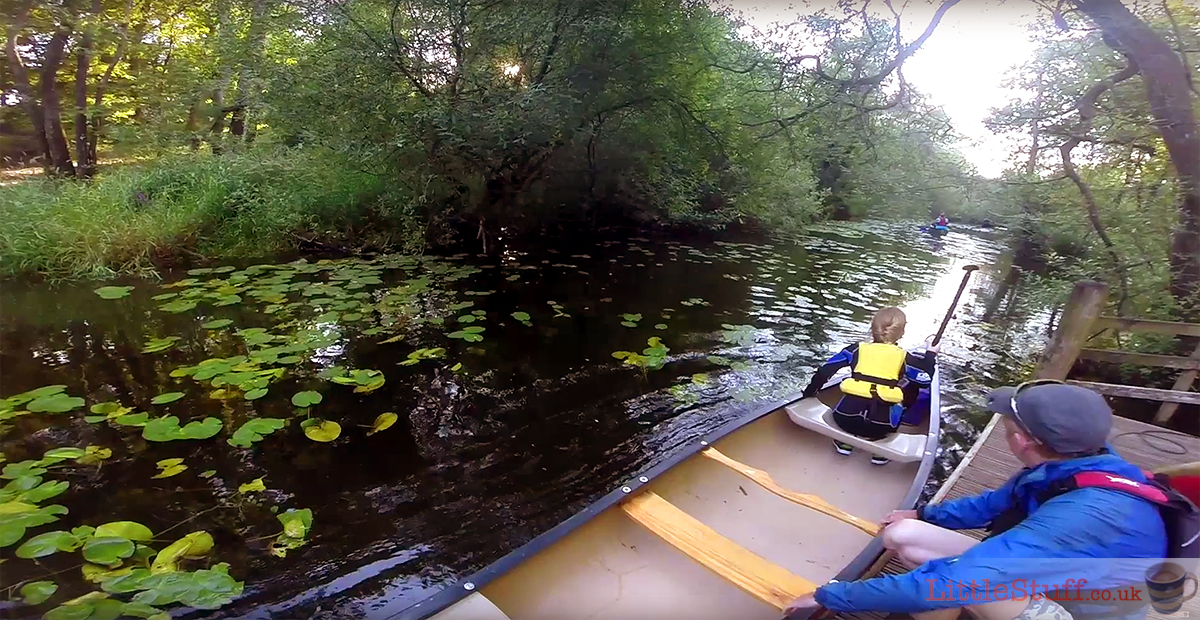 Setting off from the dock at Low Wray Campsite.

The canoes were the very big kind (yep, that’s as technical as I get with canoes), fitting two of us in each. We split into family ‘teams’, and with no fuss at all we were slowly paddling through the channel from the campsite and heading for open water.

As we cleared the last of the weeds, I felt happy enough with our paddling (I’d partnered with 14yr old Boy, and we were doing just fine together) to listen to the others.
Oh dear.
A very nervous Mr LittleStuff (wobbly boats are about as popular with him as throwing himself into water) was trying to keep a lid on the worry as his equally nervous front man 13yr old Jolly was rocking the boat and mis-paddling more and more the harder he tried to obey instructions. The other boat wasn’t doing much better, with 17yr old No.1 giving increasingly frustrated instructions to an increasingly tired and frustrated 9yr old Bear trying to organise a paddle as big as she was. 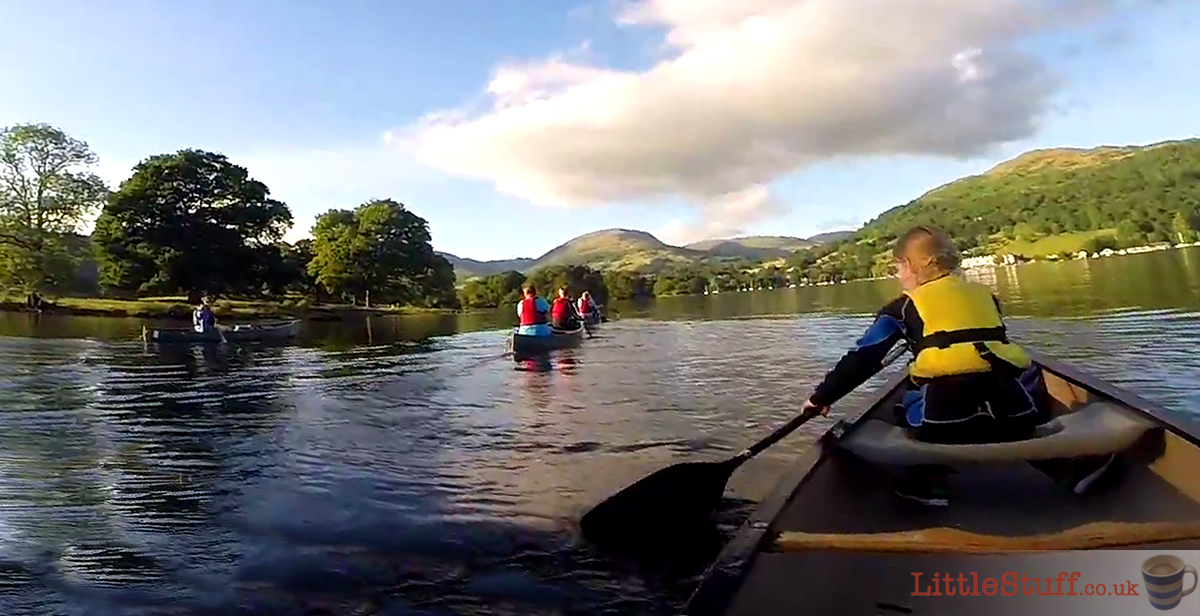 After a small navigation practice on the edge of the lake we headed to what I thought was the first island (just a promotory, there are no islands at the northern edge of the lake), and the splashy frustrations carried across the water. It became clear that we needed to make a change in teams before someone was ‘helped’ to go swimming. I suggested we head to the bank to switch partners, but Phil decided we could totally do this mid-lake.

With a little wobbly yelping, and some sterling canoe holding from the backmen we managed to entirely switch all three boats to new frontmen; Mr LittleStuff took Bear and they made a great team, I took nervous Jolly and he instantly chilled and started to enjoy it, and the two teens took off together (yeah, that might’ve been a mistake…). 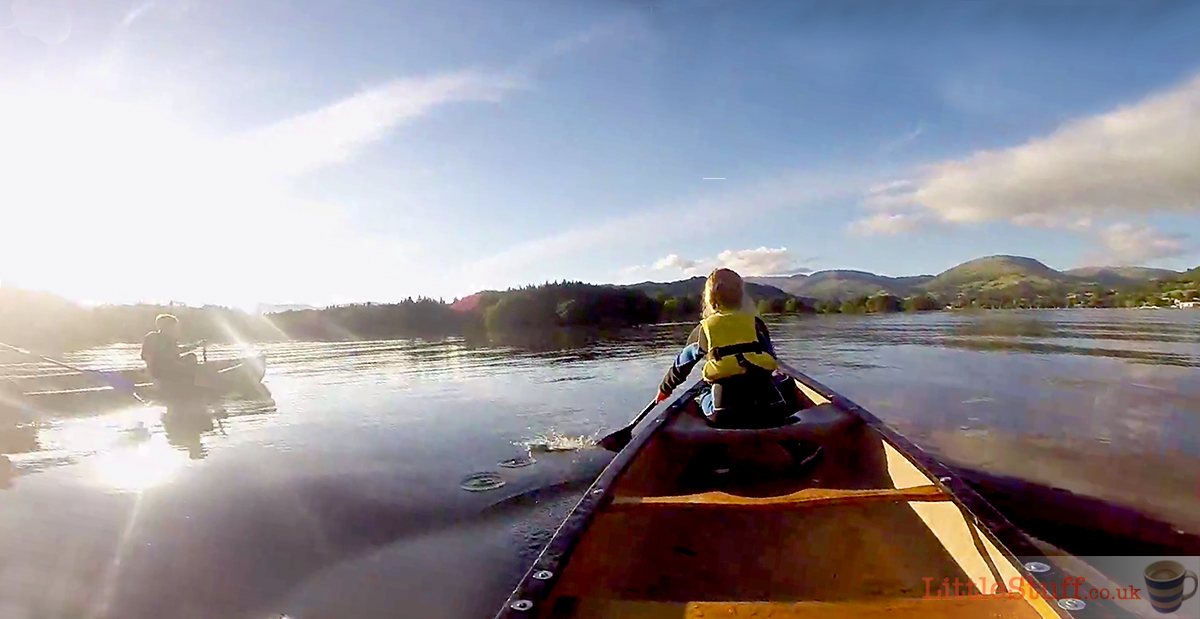 We practiced turning and direction, and worked our way right across the open water of the enormous lake (I’d laughingly presumed we’d potter a little around the edge!) as the sun slowly set. With the new teamwork creating harmony in the canoes at last I suddenly became aware of the astonishing peace that had fallen across the lake. The light was golden, we were a long way from the busy tourist areas around Ambleside. All I could hear were the birds, the splash of the water and the gentle murmurings of my favourite people.

My jaw may have dropped open as the sun turned the lake molten, the midges dancing in the last of the light. I called to Bear how utterly magical it was – ‘…like fairies dancing on a silver surface’.

My gorgeous daughter called back “yeah, except for all the dead flies…”.

I mean she had a point, but talk about crushing. She clearly has no soul. 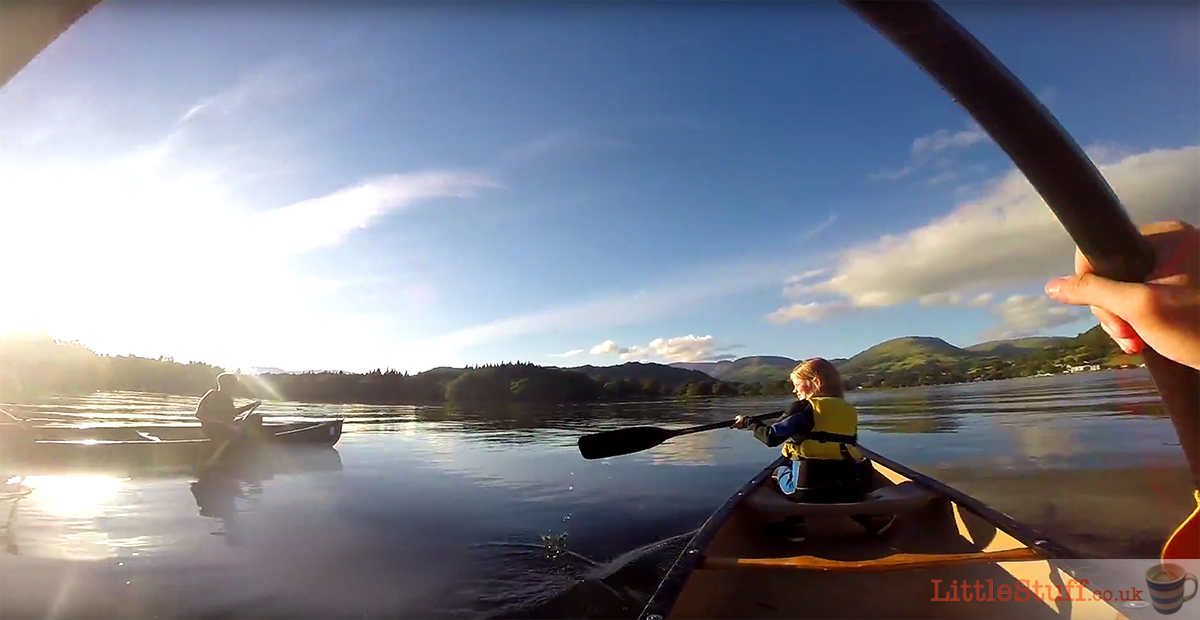 We rounded the promontory, and Phil pointed out the cliff that some adventurous souls love to dive off. Sadly he mentioned it loud enough for the teens to hear… And where No.1 leads, Bear will follow. So they beached their canoes, and walked back up to the point. No.1 jumped safely (it looked ridiculously high to me, and I’m usually pretty immune to their stupid risk taking). Then Bear stood at the edge. I was about to call out that maybe she shouldn’t jump… And she leaped.

I wasn’t worried about drowning – she’s a strong swimmer, plus she had a buoyancy jacket on. But she didn’t jump far from the cliff face (Phil clearly had the same worry, and gave her a swift judicious nudge in the back as she jumped) – and she’s never dived.

Obviously she fully face-planted, total belly flop, loud enough to almost drown out the sharp intake of breath from the rest of us. She bobbed up with a shocked still face, and then crumpled. 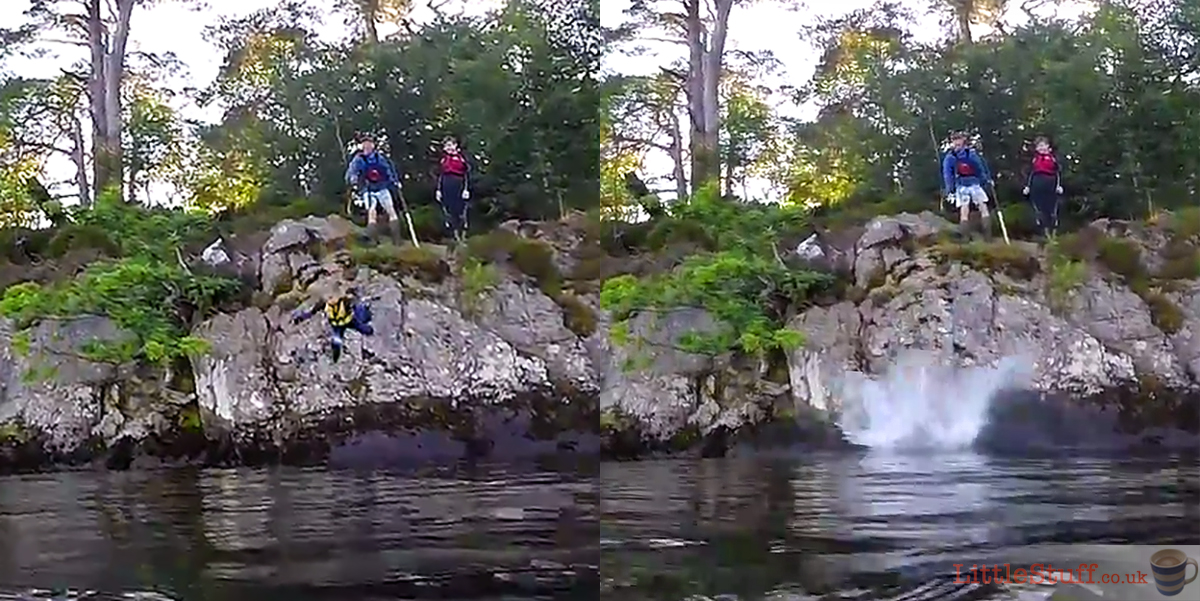 Spot the faceplant about to happen on the left…. and yes. A very small and slight 9yr old made THAT splash with her face.

Never have I felt so trapped, stuck in my canoe at a safe distance away. Luckily, No.1 is a good parent substitute in a crisis, and he was at her side scooping her up in seconds, followed swiftly by Dad who hauled her into his canoe for a hug and a bracing giggle at her ineptitude.
He casually cruised towards my own canoe, and we managed a cross-canoe hug and a quiet sob in my shoulder as the shock hit a little.
But we weren’t about to quit – she wasn’t hurt, the jacket had saved the full force, and it was only her forehead that felt like it had been slapped with a sheet of concrete. *eyeroll*

Heading onward again, we wound our way around the quiet channels and through secretive reed beds as the northenmost tip of the lake became a river. We finally paused at a weird confluence of flows to practice cutting across a stream against the current. Jolly and I totally owned getting across. We might have turned a full 360 and completely lost control on the return leg though. 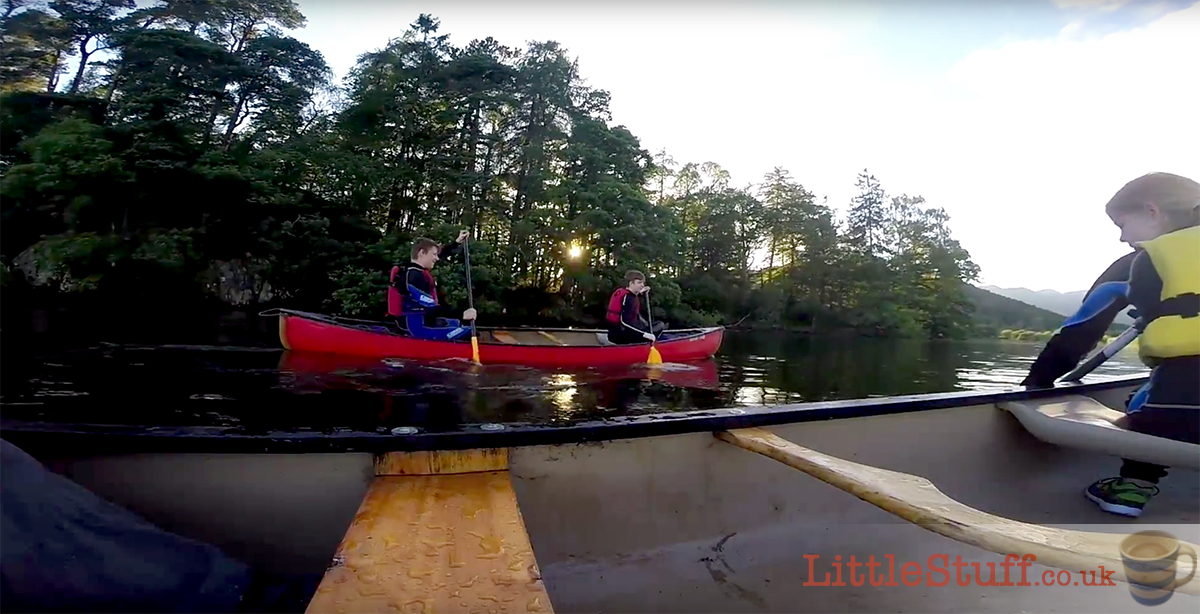 The two teens finally came up behind us, Boy having a whale of time trying to land the canoe and demanding that they go ‘looking for buried treasure Cap’n’, and a sniggering 17yr old torn between staying in control of the canoe and roaring with laughter at his brother’s ridiculous antics. For me it was just brilliant to see them having so much fun.

Sadly the camera ran out of space (note to self – when changing battery packs, change memory card too…) so I can’t actually show you the most amazing part of the evening.

The sun had set and the last of the light slowly faded as we wound our way back through the reed beds, finally pulling up on a muddy beach surrounded by cow pasture. Phil magicked a bag from his canoe, and rapidly set up a brilliant little fire pit. The boys headed into the (freezing!) water in their wet suits, but we were content to simply sit on the bank as the fire took hold, watching a magical full summer moon rise above us.

A thermos of hot chocolate appeared out of the bag of wonders, along with marshmallows for toasting.

I’m not sure we’ll ever forget sitting on that muddy river bank, the cows gently moving through the meadow behind us, watching the mist rise across the land as the biggest of full moons slowly gained height above us. Whatever romantic image my brain had conjured up at the mention of a ‘moonlight canoe’, it simply wasn’t a patch on just how special it was.

All too soon we began to feel the chill, and we packed the bag up to slowly head back across the lake. The conversation on the way out had been fun and light and constantly chattery, but now it had ceased. We were all filled with the gorgeous stillness across the water, and no one wanted to break the spell of a truly magical evening.

The National Trust’s Moonlit canoeing on Windermere can booked here, and costs around £30 per person. Everything’s provided for you, and unless you actually want to jump in you won’t get wet!