No, no, I am NOT doing that… | Caving in the Brecon Beacons

Crabbing slowly sideways  through the low tunnel I was reassured (and amused) to hear Mr C huff and puff just ahead. The children had scampered through with not a worry, but we suddenly seemed to be feeling our age, creaking in half and trying not to wedge our backs against the cave roof as we staggered slowly sideways after them. In our defense, the Mario suits we were encased in were not the stretchiest around our sturdy frames, but even so… Frankly, this had been my idea and I was pretty miffed that it was feeling a bit harder than I’d thought it would be…

When I’d suggested caving as a family adventure on our recent trip to the Brecon Beacons I’d been met with one excited ‘cool! Yes please!’ from Captain Fearless, 10yr old Bear. But then, she says yes to everything – even leaping off high cliffs without a thought for the fact that she’s never jumped into deep water before. Everyone else looked at me with a face ranging from mild concern to naked fear.
In fact, it was only when I reassured him that every obstacle could be moved around rather than squeezed through that 15yr old Boy agreed (under duress) to accompany us. But he flat out refused, point blank, to take part in any kind of ‘challenge’ or vaguely scary undertaking. 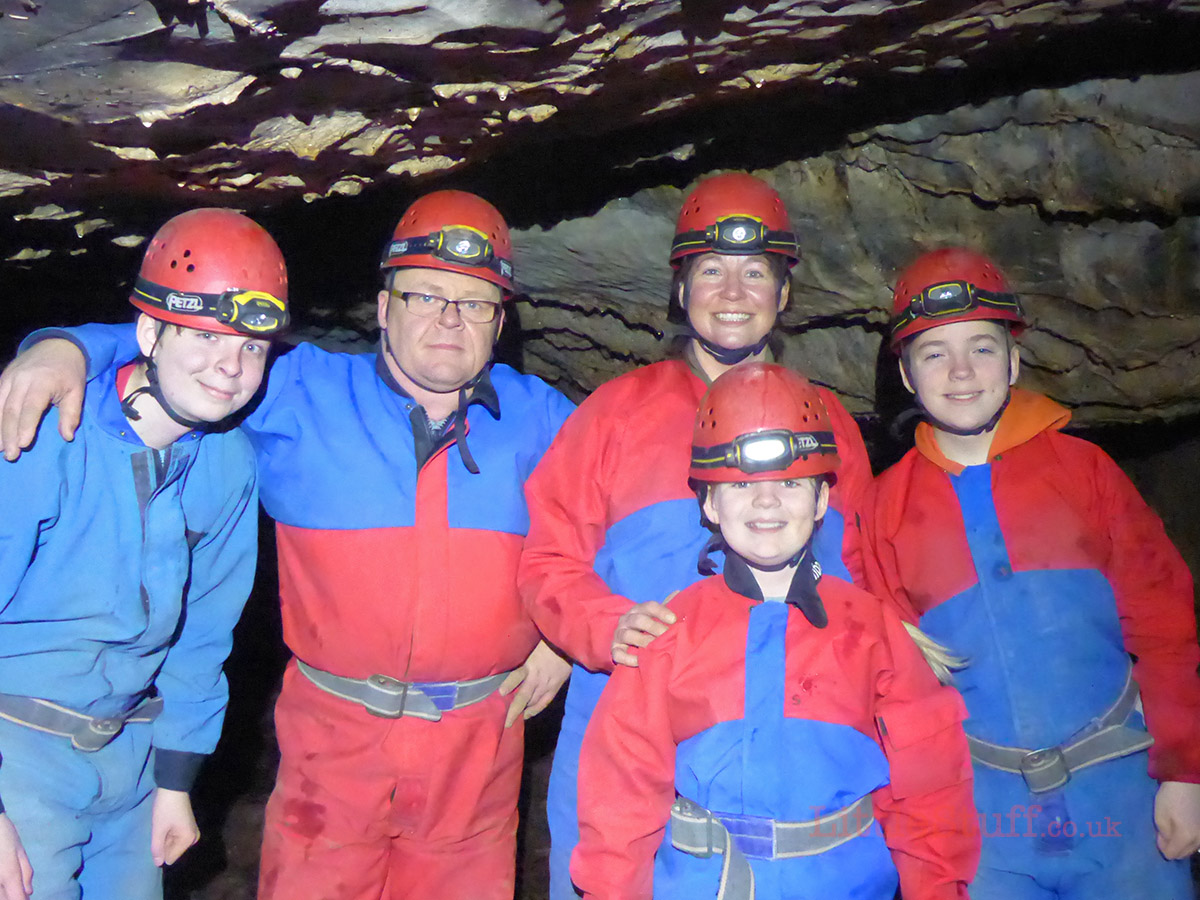 And so it was that we met with Stef (our Hawk Adventures guide for the evening expedition) in Porth Yr Ogof car park, and took to donning the astonishingly gorgeous* caving outfits (aka thick Mario jumpsuits, belts, wellies, hard hats and head torches. Lush.). Before we knew it, we were heading along the bank of the river into the wide mouth of the cave system; I looked for Boy to give his hand a reassuring squeeze, but realised he was striding out way ahead and nowhere near me. Typical. 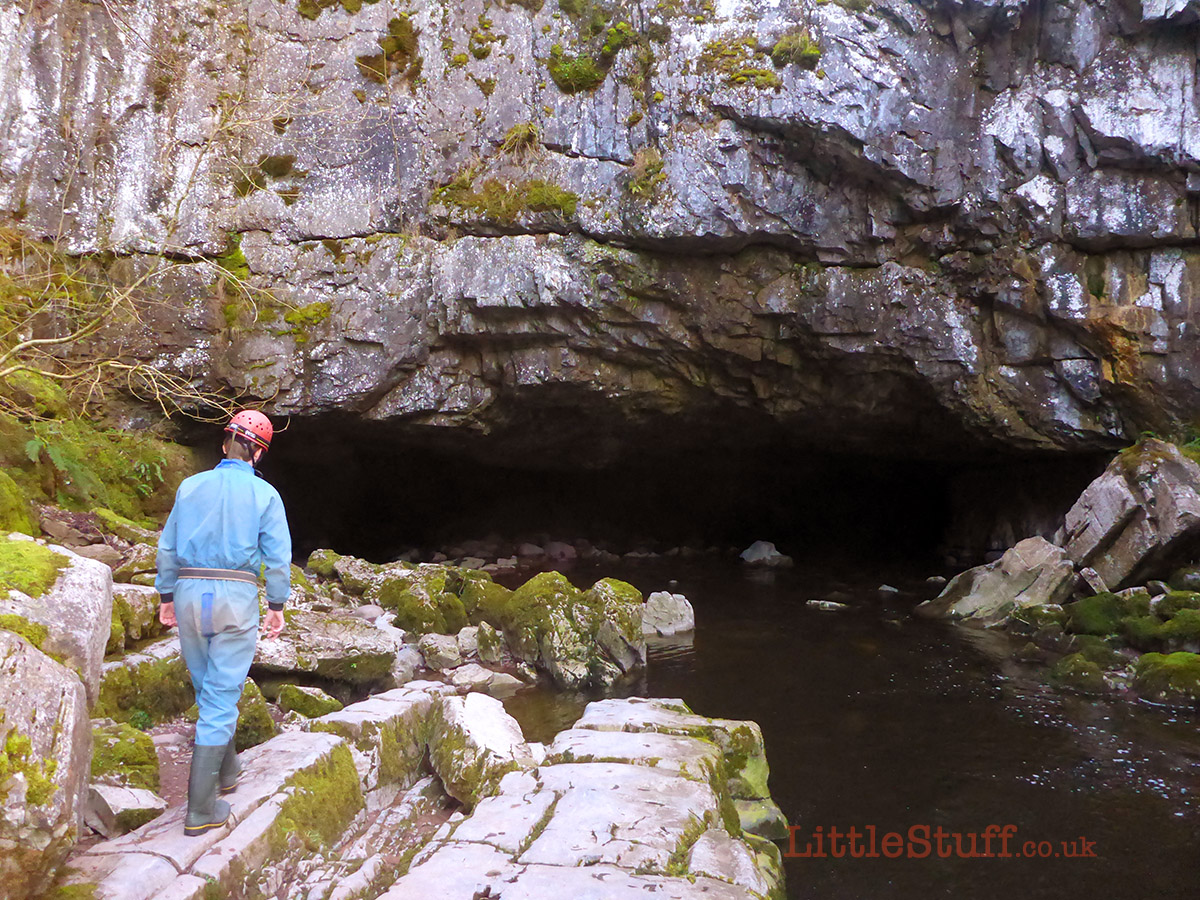 Boy, all clean and dry, right at the start of our adventure into Porth Yr Ogof

And so we started, once in the cave, with the long crab-like scramble under a low ‘roof’ that left us elderlies trying very hard to keep up. But it soon opened up again, and we manoeuvred our way through, round and under various openings, waded across the shallow fast-flowing river… and sooner than we expected we came to the ‘letterbox’ – a horizontal gap between two enormous slabs of rock. The opening nearest us was but a handspan wide – just big enough for a helmet-clad head to squeeze through.
We had already seen this on the Hawk Adventure’s website, and mutually agreed that this was a no-go, so when Stef asked if any of us wanted to give it a try I opened my mouth to assure him that none of us did.. when Boy stepped in front of me and said “yes, I’m up for that!”.
I was left flapping my mouth in surprise. Seriously? Boy wanted to try this??
Naturally Bear hopped from foot to foot in excitement at trying it too. Mad girl, she’ll say yes to anything. 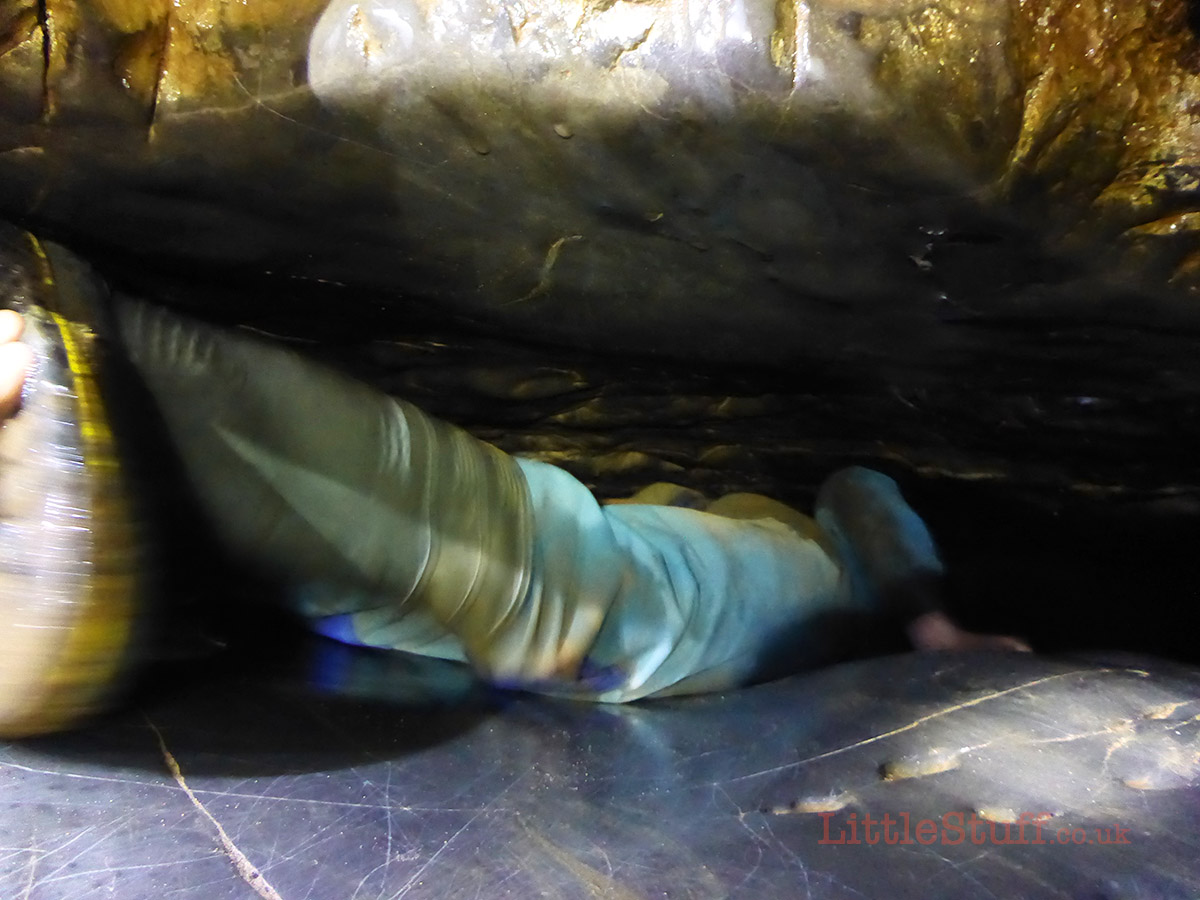 (note how his wellies won’t sit upright at the entrance, he needs to angle them to get them in…)

And so we posted Boy into the letterbox. Literally. He slid his head and shoulders into the gap, then his dad raised up his feet and gave him a healthy shove to post him through the gap – and we watched his feet slither away and disappear into the space beyond.
Bear rapidly followed suit, her slight 10yr frame needing much less of a shove than the 6′ 15yr old! Jolly didn’t fancy it, and we both felt we’d simply get stuck in the narrow opening so Stef led us the scenic route round, thank you very much, and Boy & Bear stayed put as we made a short circular path around to rejoin them a minute or so later.

And so it continued – Stef was brilliantly informative, talking to us about the different types of rock and formations we could see, telling us about the history of the cave and caving generally as we traversed our way through the paths and obstacles he picked.  I found life got much easier once I stopped thinking like a normal above-ground human who gets around on her two feet. Once underground, you need to use hands, knees, elbows, your bum… trying to stay on two feet caused all manner of problems, but once I fell to scrambling along the way the children were I got along much faster! 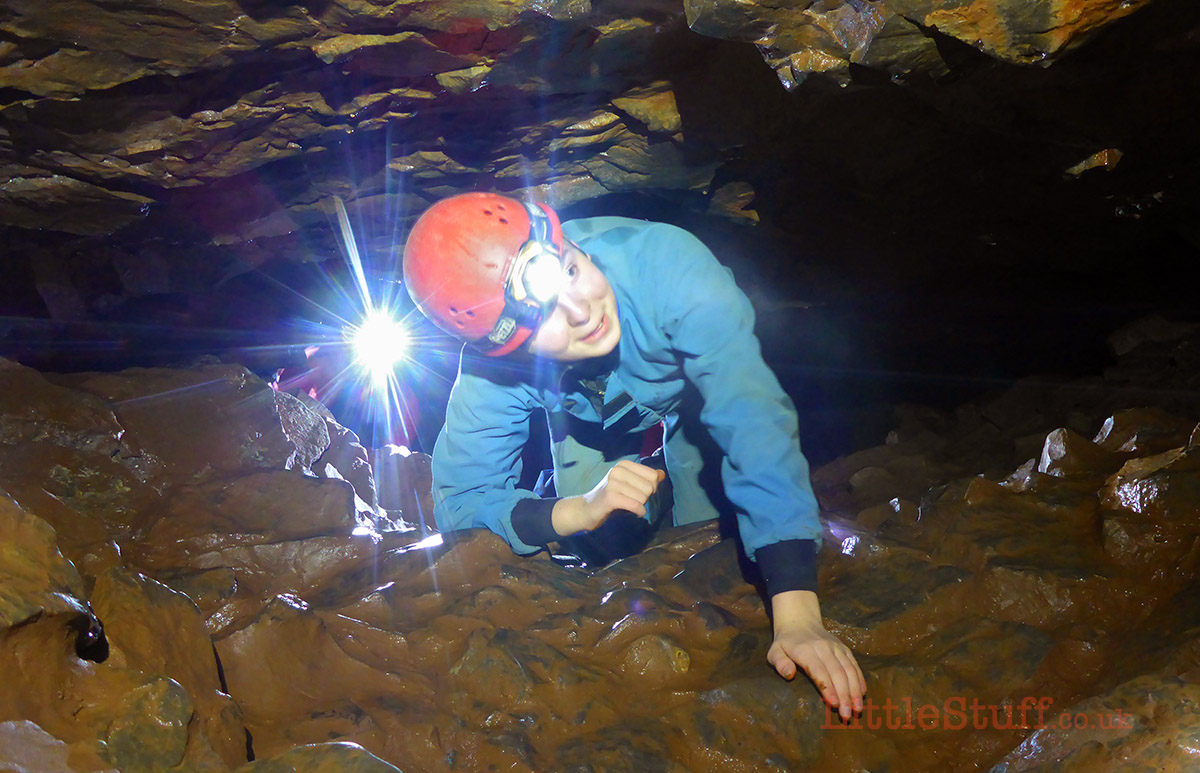 At one point we found ourselves sitting in a small dead end, and Stef instructed us to turn our head lamps off – our only means of lighting while underground. I don’t think any of the children had experienced true absence of light before, and the immediate amused laughs grew quickly silent. As the seconds ticked by in the absolute blackness I could sense an uncomfortableness among them, and a small hand patted out to my leg as Bear reassured herself I was in fact still right there beside her. Then Jolly started talking – just a little bit too fast – as he also sought to reassure himself he wasn’t in fact abandoned and alone, and Stef turned his lamp on again; sensing, I think, that nerves were stretched taught by the thick heavy dark.

After a short time Stef declared we were heading back and had just one more obstacle to face – we were all a little disappointed that we’d had such a short taste of the experience. None of us actually believed him when Stef assured us we’d been underground almost two hours. It’s madness – there’s literally no sense of time passing when you’re underground, and none if us had any idea we’d been down so long. 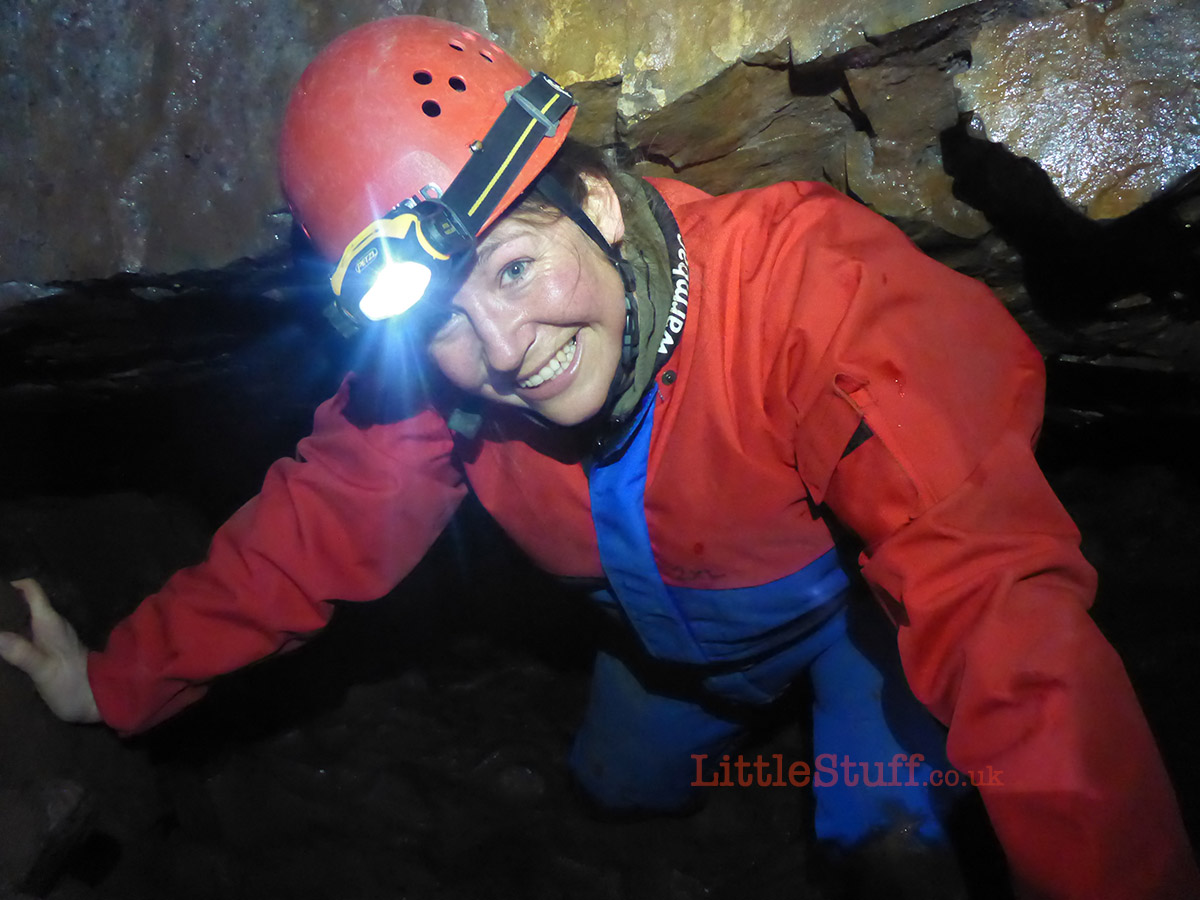 The final obstacle was a source of frustration for me, I’ll admit it. The task was to crawl through a narrow tunnel half-filled with a busy stream (up to mid-thigh if you were kneeling), then to turn at right angles to stand directly up straight and squeeze out through a narrow ‘chimney’ of rock. It held no fears for me, and I waited patiently for the children to all disappear merrily one by one beneath the overhang, though I knew that Mr C wouldn’t do the watery tunnel. Until he did.
Nipping ahead of Jolly he suddenly declared he was going in, and he wriggled away into the watery darkness himself.
WHAT was going on with my family? 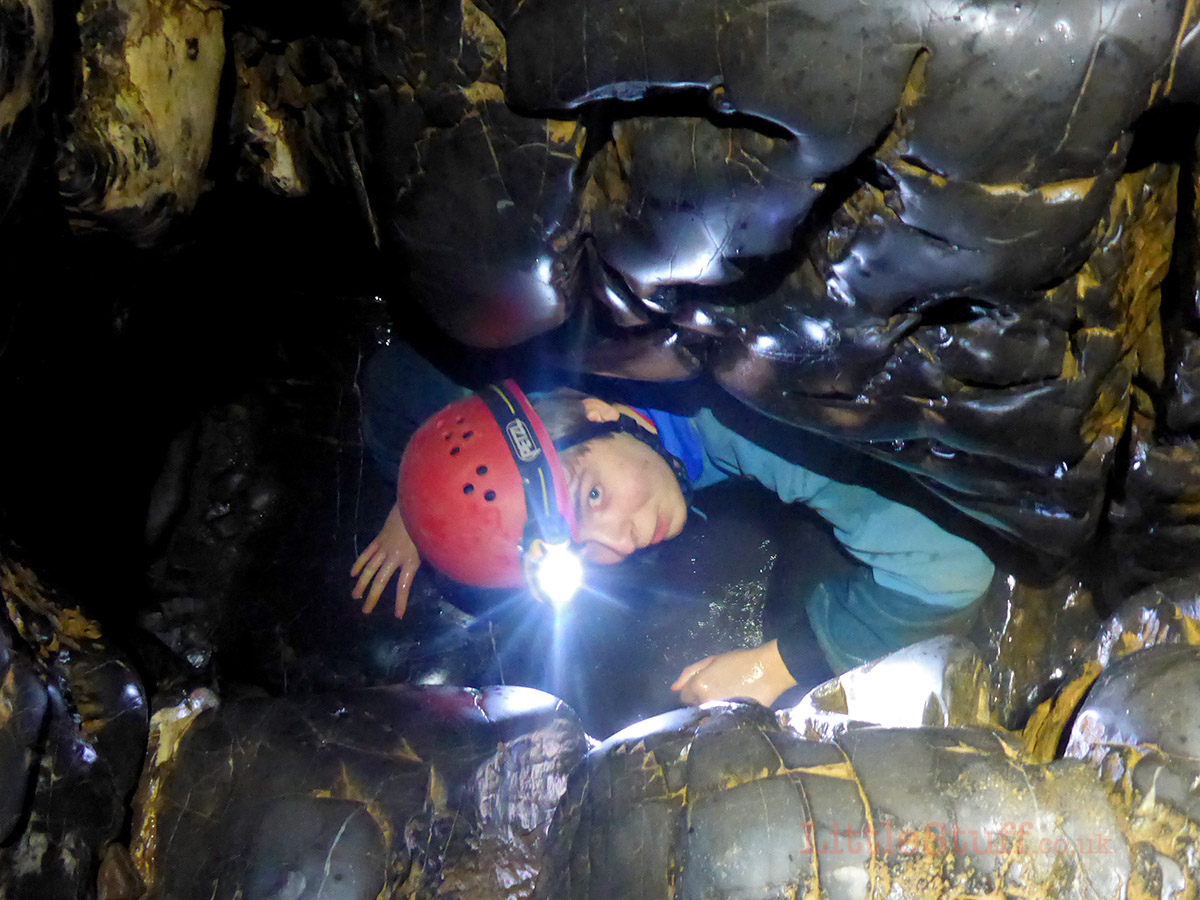 Boy emerging from the water tunnel, ready to clamber upright

However, as I waited for the shout to say the tunnel was clear ahead there appeared to be rather a lot of yelpy mumblings. Then Mr C called back “I’m out! But you might want to think twice about trying it yourself…”
It transpired that the ‘chimney’ that needed clambering out of was actually very narrow – no problem for a skinny teen or whippy 10yr old, but a slight issue for a sturdily built man with a barrel chest that got caught and required a deal of upper body strength to pull himself through. And certainly an issue for my substantial bosom (I find rock’s a rather unaccommodating substance when you need a bit of stretch), and my upper body strength is pitiful enough to just leave me squeezed and no doubt in need of a humiliating heaving out. 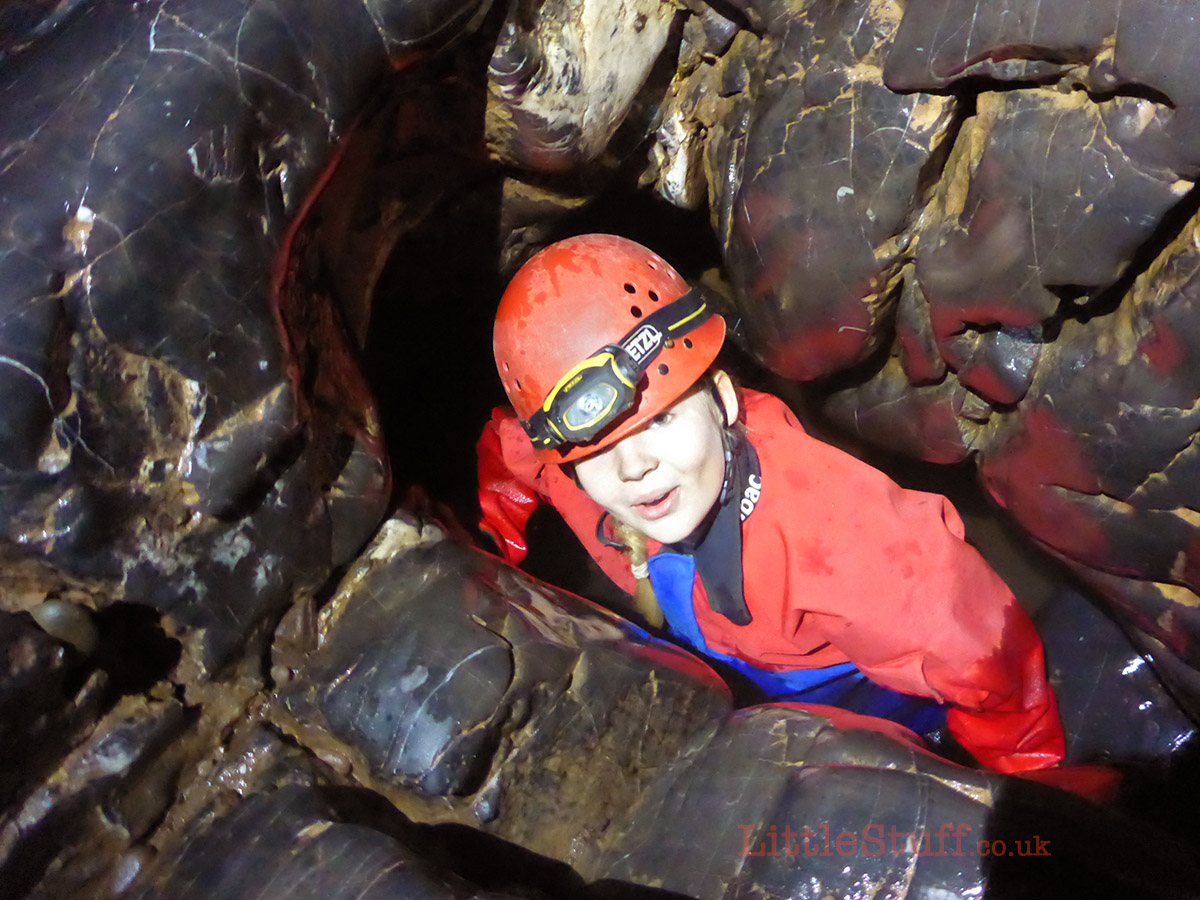 See? Easy to slither out of you’re 10. Notsomuch room in that there gap for me and my bazoomas.

I chose the clambering route around, just to save face – not frightened of the task itself, just not wanting the shame of needing to be pulled free!

And so we finally made it back out to the car park and spent an inordinate amount of time tugging ourselves free from the now wet and muddy clothing. Be aware that even though you’re geared up by Hawk Adventures you WILL get wet and muddy, and will appreciate a change of clothes awaiting you in the car! 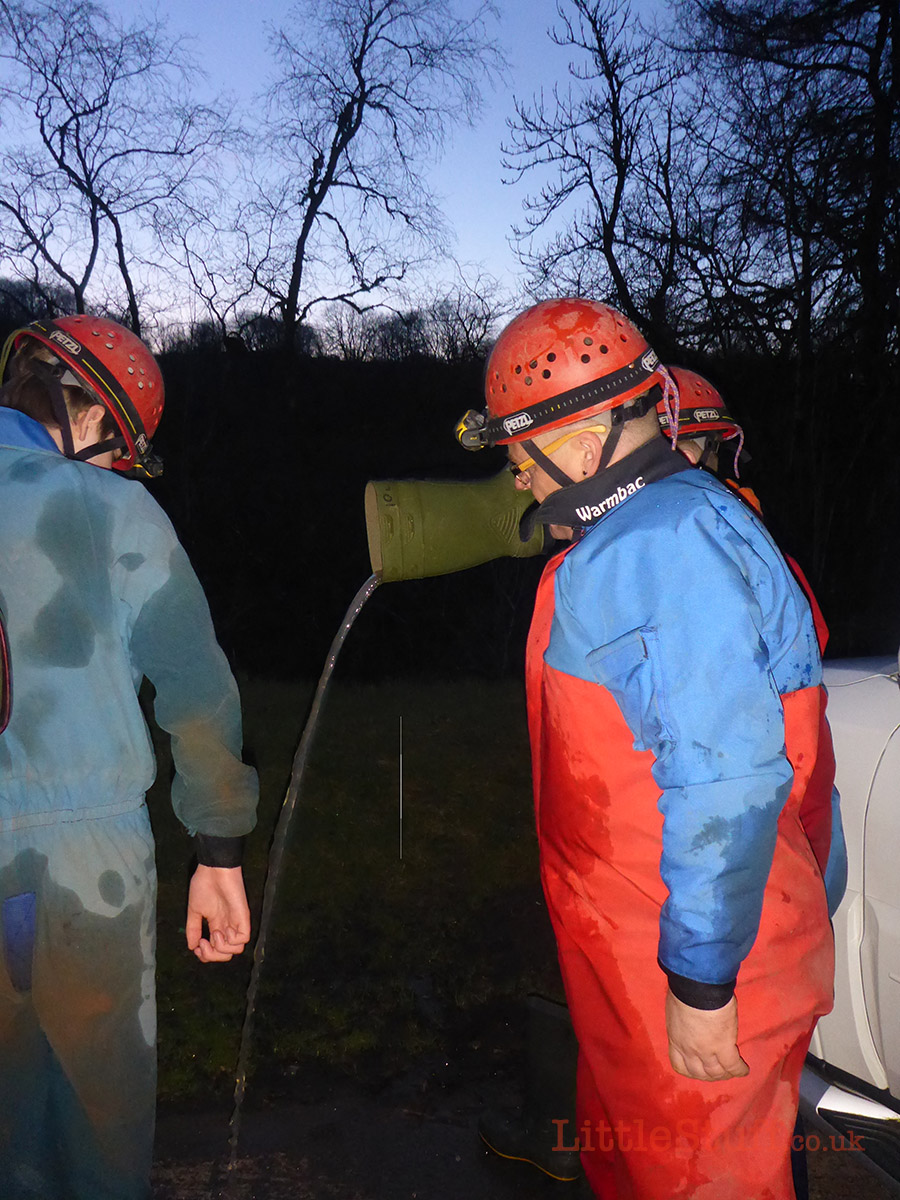 If you’re looking for a really fun, exciting and all-inclusive activity during your stay in the Beacons I really strongly urge you to give Hawk Adventures a shout. Whilst none of us have decided that taking up caving is an urgent priority, we all loved every second, and would do it again in a  heartbeat. Thank you so much for your care and expertise Stef – you pitched it perfectly with enough obstacles to keep us all interested but with nothing so scary you frightened us either!

Pricing is approximately £45 per person for a half days activity – but it varies greatly depending on what you want to do where and when. Give Hawk Adventures a call and have a chat; they’re full of knowledge and brilliant ideas – I honestly suggest you place your family safely in their hands and trust them, they won’t let you down. We’re already planning on some Gorge Walking for your next visit :)

*slight exaggeration. “I look amazing in this caving jumpsuit” said no one ever in the history of ever. Let alone any plentifully-bosomed middle-aged mother to four.