The Parc de Fierbois is in the beautiful Loire region just south of Tours (close enough to explore the Touraine region too). After our encounter with Paris International, I’ll admit we headed south with some trepidation and not overly blessed with good humour…
But as we drove the through the pretty little village of St Catherine de Fierbois we began to relax – this was the France we had been looking forward to.

Beautiful buildings, the restaurant spilling out on to the village square, the trees offering plenty of shade… the lanes grew smaller as we drove the remaining mile to the site, and we all breathed a huge sigh of relief as we pulled in. Not the prettiest of entrances – but this IS, after all, a holiday park, and that is exactly what it looked like. Reception to the left, pool to the right (a pool! A big pool! At last!). And trees. lots and lots of cool, green, shady blessed trees.

I went straight to the Eurocamp van, still feeling the flutters of antipathy caused by our previous few days hovering around the edges of my heat-fried brain; and found the van empty. Of course.
Just as I turned back to the car in frustration I heard a cheerful shout, and a rather drippy (literally!) man approached me beaming happily. This was our first contact with our courier then… Irrepressibly and contagiously cheerful he apologised for not being there to greet us, but had been taking his lunch in the pool. He asked us to give him 10 minutes to get changed, and was back in five.

Now a little drier, he quickly explained the layout and useage of the Eurocamp van itself – in particular showing the children where everything they would need was. Then he gave us a quick pointing tour of the main reception facilities (pool, bar, reception, shop, table tennis, lake) and got us moving quite quickly towards our own van.

Our initial fears were unfounded – Parc de Fierbois really is set amongst woodland (not all, but a lot of it) and the tall trees provided delicious green relief from the unrelenting heat.

Our (Villagrande Deluxe) van on this site was huge in comparison to the one on Paris International; generously proportioned with 3 bedrooms (with actual room to move), 2 bathrooms, a large living area/kitchen and masses of storage (tell me it’s not only me who doesn’t actually bother unpacking the boys clothes from the suitcase?). Not that we used any of it much – we mostly lived outside on the deck, just coming in to sleep.

Within an hour of arriving we found ourselves slipping into the amazing pool system, breathing, smiling and literally feeling the grumpiness just slide away. Hoorah!

The Parc de Fierbois really is a lovely place to be – relaxed, friendly, not too big, and filled with families wanting the same kind of holiday. 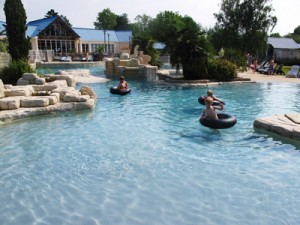 The biggest and best part of all is the pool. Oh, my, the pool. In the heat we had, there was simply no where else we wanted to be. A large safe shallow pool (but deep enough for parents to sit in happily), leading into a few other areas with different depths (including a fab very deep pool and of course the giant slides), all landscaped with rockery and flowers. Something for all of us, all very safe, and so well laid out that we were content to let the children go, as long as we could see the two younger non-swimmers. They had so much scope they were never in any danger of going out of their depth. Swimming was just a brilliant, fun, relaxing family activity which we did every single day – a completely different experience to our CenterParcs swimming in the UK.
When we eventually tired of the pool, we loved to walk by the lake (and spot not just the fish but frogs, snakes, beetles, dragonflies and whatever else the children could dig up), and No.1 son finally managed to learn how to fish.
The boys loved to play the table tennis, and simply to head off on their scooters around the safe smooth roads. 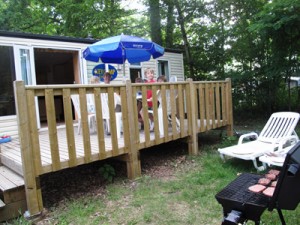 Cooking was easy – the barbecue made it a no brainer, and the oven was only used once on the whole two weeks I think. Many guests we spoke to didn’t venture out of the parc at all – and it would be easy to fall into the relaxed rhythm of days that way.
But we did want the boys to see a little of France itself, so we took a few trips – I had wanted to see the prehistoric sculptures at Roc-aux-Sorciers for years, so that was a fascinating afternoon outing, not so interesting for the younger children until they visited a small tent and spoke to an amazing man with excellent English who taught them all about flint knapping, and had them all carving their own pendants with flint and stone.

We decided to visit just one chateau, one historic building being about the boys limit in the heat – we chose Chambord, the biggest, which was stunning, if a little soulless. However we took longer than we expected to trek round – it’s actually a little TOO big, especially for small children, and the estimated hour and a half took us nearly three hours with the audio tour, partly due to the utterly entrancing Manolo Valdés exhibition. 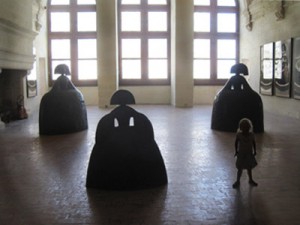 In taking so long we missed out on going to the Horse Show which looked and sounded a far better experience than the chateau itself, which was a shame. We skipped the boating, cycling and waiting for the “Chambord, Rêve de Lumières” show in favour of returning to the pool back at the site!
Another day out was Futuroscope. You can read all about this most fabulous of days out here – please do, as you should NOT miss it. Just a totally amazing experience, the likes of which we have never seen.

We had a wonderful meal at the restaurant in St Catherine de Fierbois at the Auberge Jeanne D’Arc in the market place – totally recommended to anyone staying on the parc, it’s just a mile and walking distance along beautiful shady lanes if you prefer not to drive. 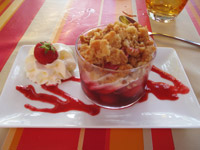 The site itself has a standard shop selling your basic food needs plus fresh croissants/baguettes and plenty of holiday type extras (rubber rings for the pool made for a huge amount of fun) – as you would expect, the local supermarket (Intermarche) in Ste Maure du Touraine was cheaper for stocking up, and was the best place for petrol too.
The locals were warm and welcoming, and particularly pleased with our terrible efforts at speaking French (my GCSE was a lo-o-ong time ago…).
Best of all were the Keycamp couriers on site. Paul “the funny guy” (by the time the children learned his name it was too late, and ‘The Funny Guy’ he was christened) was relentlessly chipper and enthusiastic, often seen darting around the site on his bicycle with a wave and a ‘Ciao-Ciao!’ He was a font if useful info on our trips out regarding prices, times to go, what not to miss, what to take etc; he clearly had taken the time to learn about his area, and did his best to help everyone have a great holiday.

‘The Funny Guy’ Paul with the boys

The team were short-staffed whilst we were there, and yet they were unfailingly warm, approachable and helpful. The kids clubs looked great (not that ours could be persuaded to go) and I was a bit jealous of the Teens ‘base’ club activities to be honest.

We did have to adjust to a different pace of life – the parc woke slowly, dipped in the heat of the day, and was at its most active in the early evening. Lunches (the obligatory bread, cheeses, salad and fruit I would never get away with serving day after day in the UK) were enjoyed back at the van, under the lush deep shade of the tall trees. 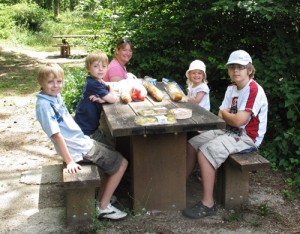 The site did quietly bustle after 11pm as the bar shut and those families still out headed back to their vans or tents. A couple of nights we were disturbed by noisy neighbours, but such is the way on a busy parc – and there wasn’t ever a hint of anything nasty or threatening. In fact, it was an incredibly quiet and peaceful place to be considering the large number of people contained within the trees. The children adapted quickly to the later lifestyle, and we loved to finish every day sitting on the deck playing games together as the air gradually cooled at last.

This is NOT our usual type of family holiday, we are far more often found spending two weeks in a cottage half way up a mountain – sharing our precious family time with so many other people is not what we would instinctively choose to do.
But.
We genuinely had a wonderful, wonderful family holiday at the Parc de Fierbois in the end, and don’t hesitate to say that it was the stuff family sunshine holidays should be made of.