Trying the Porthcawl Surf – Our First Surfing Lesson Ever

As guests of Bridgend, we had a few activities arranged for us – but when they suggested surfing, I gracefully declared myself and the husband out of the invitation. Naturally I accepted happily on behalf of the children.
Oh, come on.
Porthcawl Surf; surfing in Wales – in February?
Be serious.
On top of which, there’s the whole wetsuit thing.
No, I think not, thankseverso though.

So, after a fabulous morning at Bryngarw, and a quick pitstop back at the cottage for lunch, we headed down to Rest Bay to the Porthcawl Surf School.
Initially we couldn’t find it – mostly because the area was drowning in big vans. Not surf vans, either – no; BBC vans. Dr Who was being filmed! Oh the excitement!
Anyhoo, we located the ‘surf school’ – which is actually a trailer in the car park with an enormous amount of surfboards outside, and met up with Hugh the owner and our instructor. 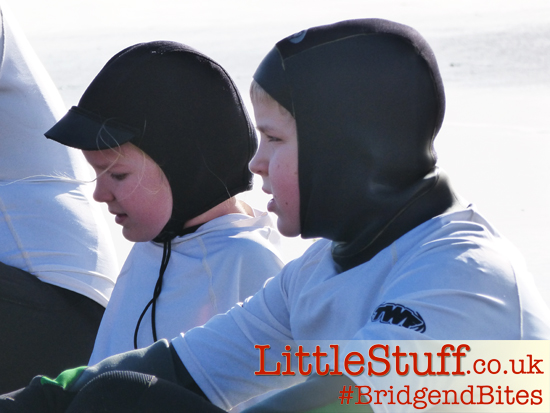 see? Hamster-cheeked seals. I’d say they were adorable, but i’d get my toes stamped on for that.

Hugh, and his glamorous assistant Dan, were lovely. Properly lovely.
They assessed the children for sizes, and then we whisked over to the changing rooms (fully heated, with lockers and hot showers too). Never mind the surfing, this was my workout for the afternoon – wrestling three of the children into wetsuits. It was exhausting. Then I found that the easy one, the 7yr old, had been plopped into one too big – and had to start all over again! 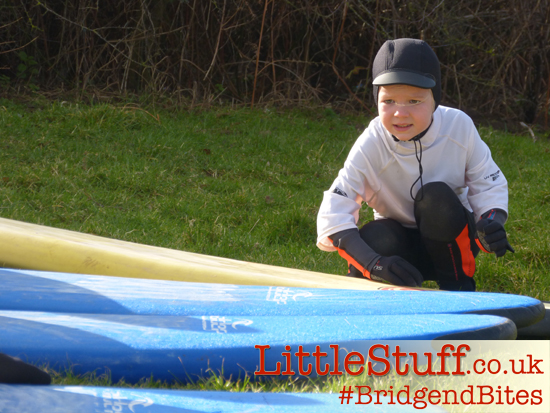 Waxing her board. Resisting the temptation to draw flowers on it.

Eventually they were all kitted out in suits, hats, gloves and shoes, with white t-shirts on over the top. I instantly became mother to a bunch of hamster-cheeked seals, and have been sworn to protect the less-flattering photographs with my life – sorry.

First up, they had to wax the board. I loved that Hugh took them through everything they’d need – not just bunging them straight into the sea, but teaching them from start to finish. Bear, who does not like the sea and was feeling very nervous, had been so excited at the wetsuit idea, and so encouraged by Hugh that she was feeling quite confident at this stage. And then they got given a great big white crayon and got told to colour the board in… I was a bit surprised she didn’t start drawing flowers on it, but she was good and gave it a good scrub the way she was taught. 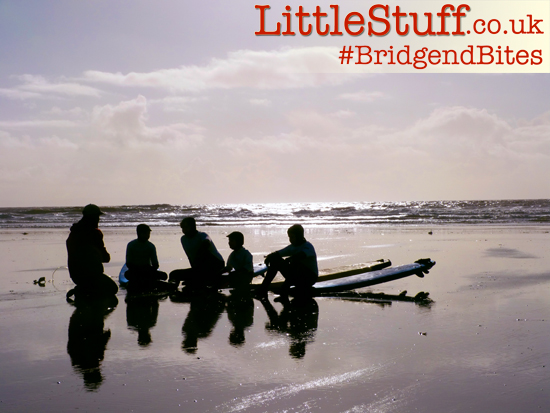 Then they had to carry their boards down to the sea, and across the sands of Rest Bay out to the edge of the surf.
Here the first lesson took place, with safety and basic catching-the-wave principles.
Hugh was brilliant – not only providing the sharp eye and guidance the older ones needed, but also the warm encouragement and support that ensured the nervous Bear (who swims like a fish in swimming pools) felt confident in the sea for the first time ever. 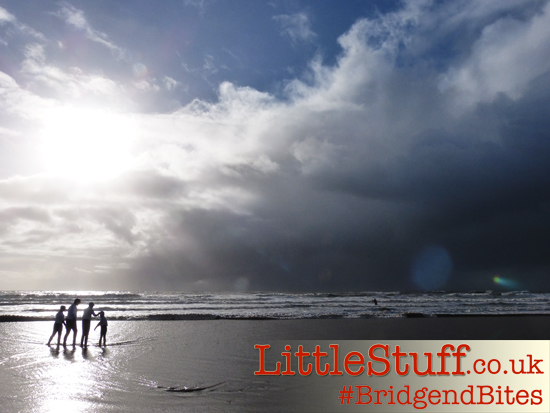 We stood and watched, threw sticks for the dog, and eyed the black cloud fast approaching and blotting out the glorious blue sky. Eventually the cloud made it to us, and the heavens opened. Standing on the sand, we got utterly drenched and entirely frozen – the sleety rain was February-vicious! 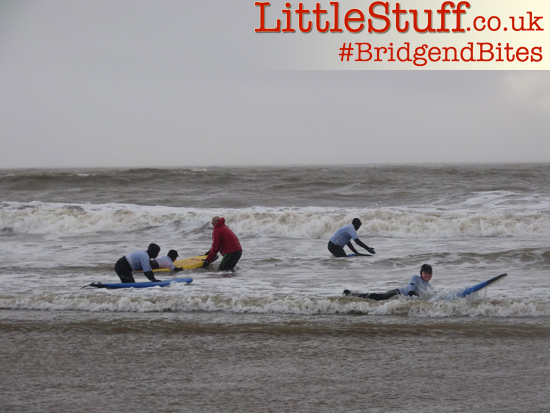 Where’d the blue sky go? Not that they care…

Bear lasted around 15 minutes in the water, managed to catch a wave and ride it to shore on her tummy which she seemed to feel was the signal to quit while she was ahead. 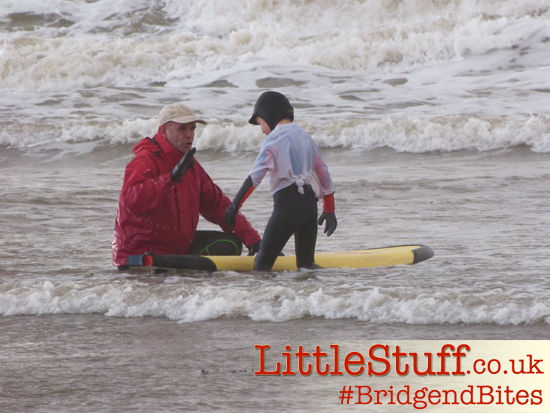 Hugh taking his time with Bear, really helping her confidence.

So I headed back up the beach with a shivering wreck who declared that she really loved surfing – but only in the summertime please. Shivering myself, I could completely understand that. 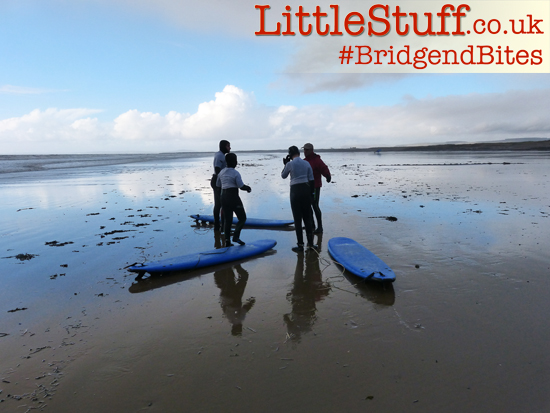 Typical Welsh Weather – rain and sleet are gone, blue sky is back. Lesson Part II – this is where they learn to stand up…

Once I’d wrestled her back out of the wetsuit and shoes – which, by the way, is nigh on impossible when you’re both giggling and sniggering at how pathetic you are at tugging them off – we headed back to the beach where the boys were just receiving part two of their lesson. They had all by now managed to catch a few waves whilst lying on the board, so now they had to learn how to stand up. 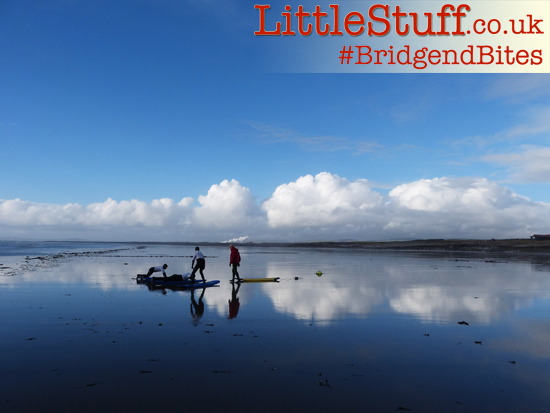 They quickly headed back into the waves with a determination I have rarely seen. Time and again they caught a wave, got up on their knees… and then rolled under or flipped off. Over and over and over.  Yet none of them was defeated. None of them gave up and decided it wasn’t for them.
The skies cleared, the sun came back out, and they just kept trying. 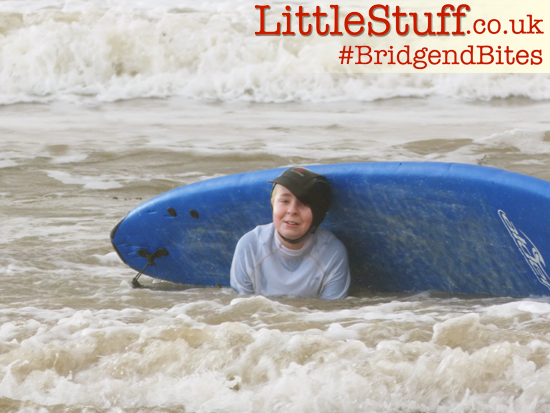 Pretty sure the board is winning that one, Boy…

Jolly came close – made it to his feet for maybe 2 seconds of exultation before losing his balance and tipping off.

But then, eventually, there was a shout. Boy had made it; he was gliding securely in to the beach, feet planted firmly on his board, shouting in triumph.
Eventually we had to call them in – all three came reluctantly, all three wanting just-one-more-go.We trekked back to the changing room, and they couldn’t stop talking, comparing and explaining.
All three agreed that the feeling of catching a wave, the surge and the lift they found, was like nothing they had ever felt before, and something they couldn’t wait to do again. 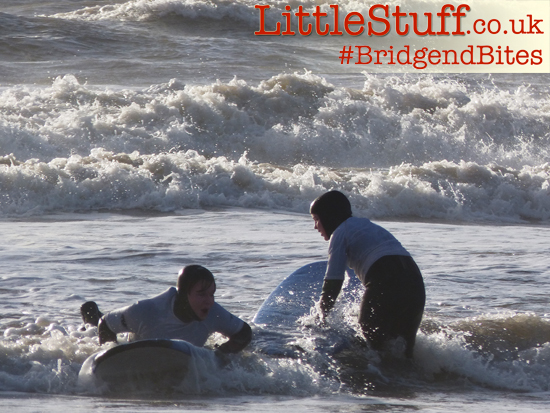 Eventually, we had managed to extract all the boys from their wetsuits and shoes and gloves and hats, and we returned all the gear to Hugh and Dan with the hugest and most heartfelt thanks I’ve ever heard my children exclaim.

Getting ready to practice throwing themselves on the board.

I cannot recommend Porthcawl Surf enough – I never felt that they were in anything but the very best of hands, but not only was I confident in the safety and the teaching – Hugh was an excellent teacher. He lowered his level to be warm and reassuring for a nervous 7yr old, but managed to engage and enthuse a 15yr old in the same lesson. That’s no mean feat.
Plus, of course, Rest Bay? Well, as beaches go, it’s pretty damned stunning…

A beginner lesson at Porthcawl Surf School costs just £30, and includes tuition, wetsuit and surfboard. Best of all for me, this isn’t the start of a hideously expensive exercise – with that one afternoon’s surfing under their belts, the boys now have all the basics and we can simply hire them the equipment next time we go. Board and summer wetsuit will cost just £15 for the day.

Even better value (and more fun for the whole family) for learning is Porthcawl Surf School’s Family Weekend Surf:

We know how costly it can be if you have a family and want to spend a weekend surfing so we’ve done our best to keep the cost as low as possible.

A weekend of 1 Learn to Surf Lesson, and  2 Surf Hire sessions means you can surf for 2 full days.

Cost is just £65 per person, and the Accommodation is right on the beach at Rest Bay.