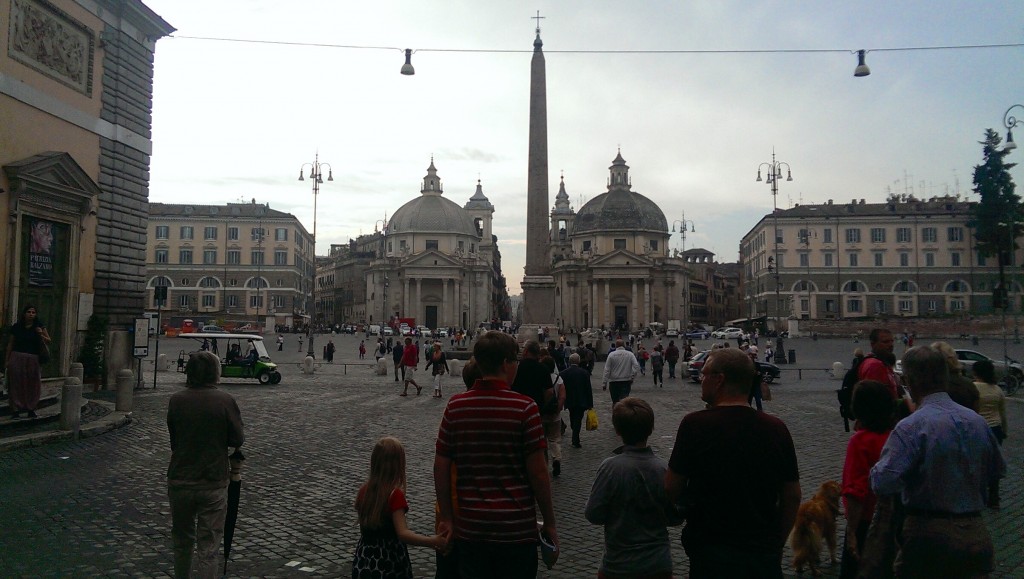 The Piazza Del Popolo – the site that greets you when you emerge from the train station. Talk about shouting “you’re in ROME!”

After a forced rest day (thanks to the strikes on the public transport – we decided it wasn’t worth battling and risking getting stuck!), we were up early, ready to tackle our trip into Rome. The help from Flaminio Village’s brilliant information desk had been excellent, and we had a detailed map for the walk to the train station, with clear instructions for which train to catch to and from Rome.

We followed them carefully, risking life and limb crossing the busy roads, and soon found ourselves at the rather dingy Station.
Once again we were helped by a local to find the right platform, and before we knew it we were rattling our way into Rome. Go us!
As we only had one day, we knew we had to reduce our expectations of just how much of Rome we would get to experience. Looking at the street map, we decided that keeping to the obvious would be the best bet.
So we opted for a walk down the centre of Rome, along the Via Del Corso straight from the Flaminio train station all the way to the ancient ruins of the Forum.
We deviated slightly en route to see the Pantheon, which was… Staggering. I know it’s a cliche, but we all wandered through the crowd inside with our mouths open, unable to believe the very building we were walking in had been created by ancient Romans. 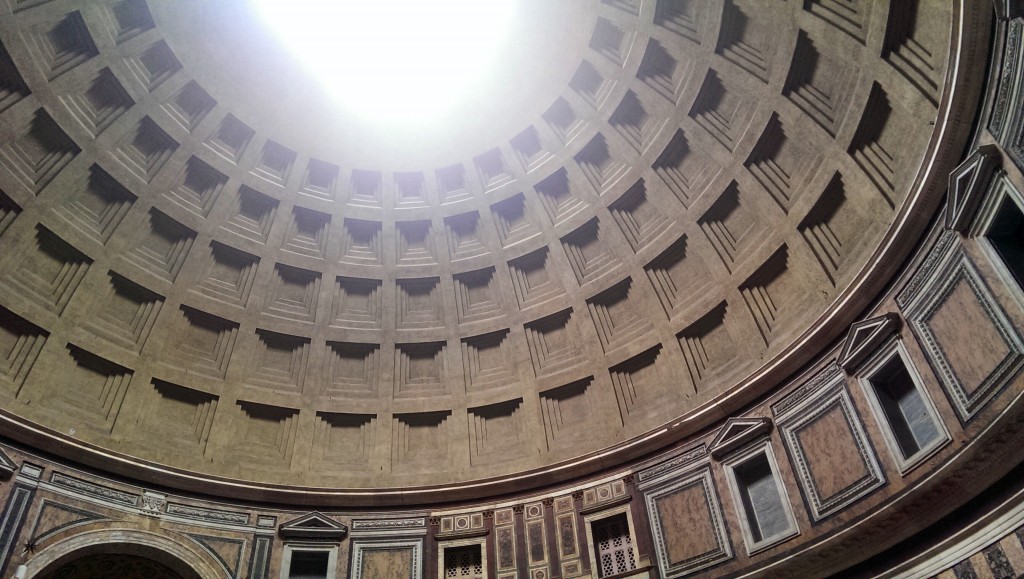 Mostly I just looked UP….

Returning to our route, we kept going until we found the Il Vittoriano (pretty hard to miss as it fills the entire skyline when you’re up close), then skirted it to wind our way though the network of back streets to the Forum itself.
By accident we approached through the Piazza del Campidoglio, the remarkable square designed by Michaelangelo which contains the Capitoline Museums, and gained a fabulous view of the ancient remains before working our way down to the entrance. 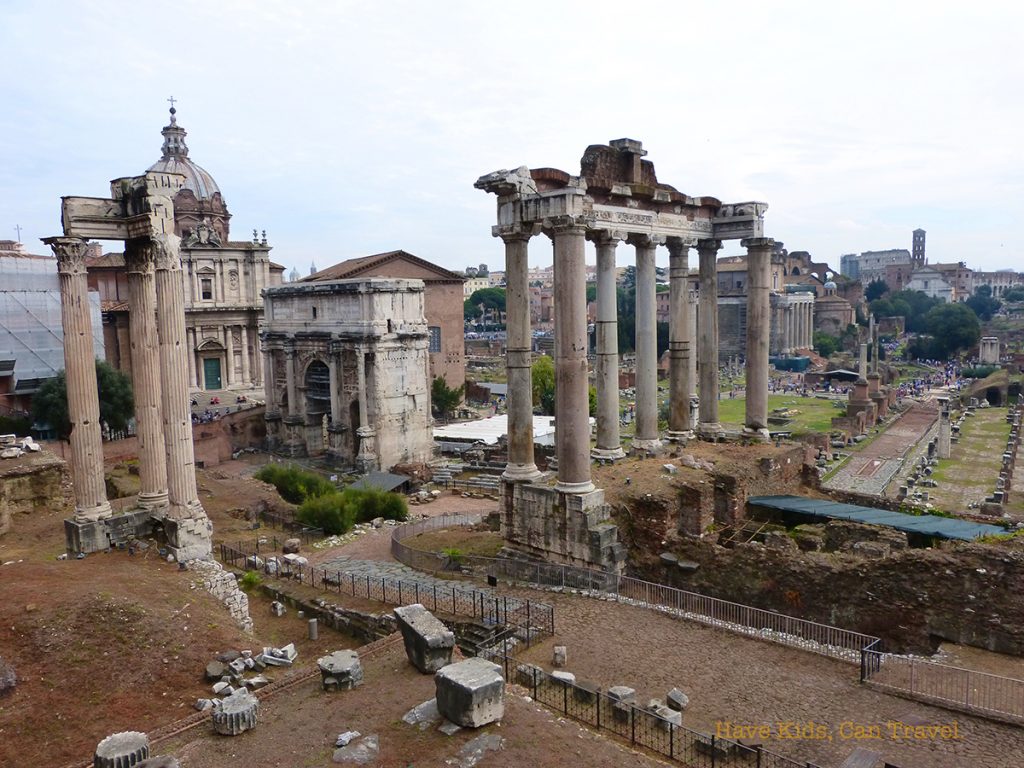 We couldn’t believe that entry for the Forum, the Coloseum and Palatine was so cheap. All the children were free, and it cost us just €21. Unbelievable bargain.
The heat was building in intensity as we entered the Forum, gazing at the jumbled ruins of a place we all felt we should recognise. Bits and pieces stick out for us – the original bronze doors of the Temple of Romulus were astounding, the cryptoporticus under the Palatine hill was evocative, and the more modern formal gardens gave us a great view across the forum. Overall, I think the children were less impressed than they had hoped to be, and the heat began to wilt the younger two especially. 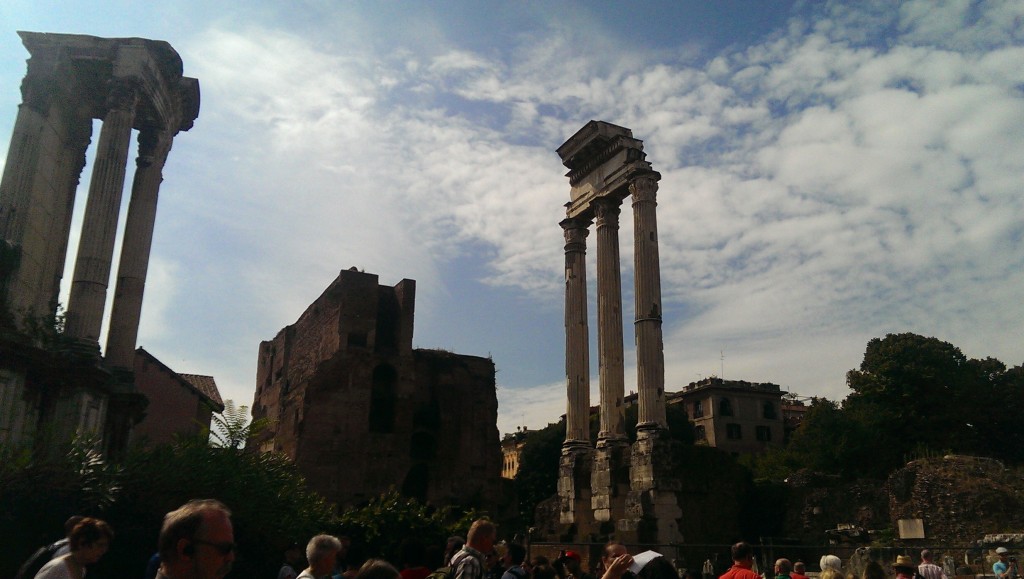 The very scale of the remains was astonishing

We opted to find lunch before visiting the Colosseum, and heading back into the network of small streets we found a small family run restaurant who served the 7yr old ( who actually nodded off with her head on the table while we waited) a pizza “bigger than my head!”.
Feeling re-energised we headed back to the colosseum, and gaped in amazement at its sheer size and vision. I wished we had a guide, as I felt we only skimmed the surface of what was to see; while I could have stayed much much longer the younger children bored quite quickly of the endless circular walk with the ‘same old stones’ on view. We found ourselves back on the busy streets in oppressive heat with tired small people, and decided that we would be silly to try and cram anything else into the remains of the afternoon, instead taking a slow walk back the 1.5km to the train. 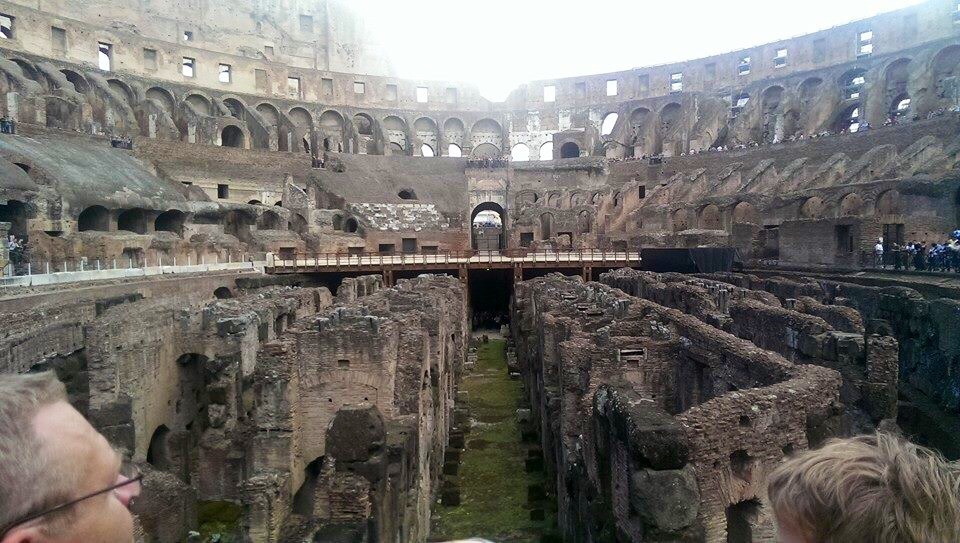 I wanted to just stand and gaze and breathe it all in….

We’d only been walking ten minutes when the shimmering blue skies darkened rapidly, and suddenly the clouds burst in a torrential deluge. We sploshed along for a while, but it just kept getting heavier – in the end we took refuge in a church. Naturally.
Once the rain had lightened we took off through the streets again, detouring only when I spotted the sign for Giolitti’s. How could I possibly come to Rome and NOT stop here? If it was good enough for Audrey and Gregory… But the signpost was the only one, and I lost hope in the maze of back streets. Thankfully Mr LittleStuff knew how much I actually longed to visit and refused to give in to tired small legs, forcing us just a couple more corners… and there it was. It was absolutely worth detouring for, utterly incredible gelato from a fabulous little back street family-run business which doesn’t feel like it has changed for 100 years.

I know, it’s not the best photo – I was tired, and soggy, and frankly wanted to enjoy my gelato. But such a cherished memory that it evokes.

Standing in the narrow alley outside the famous shop, sheltering from the last sputtering remnants of a thunderstorm, eating utterly beautiful don’t-want-to-finish-it gelato, laughing and chattering with my tired and soggy family; it will be a memory I will always cherish.
The return train trip was busy, but simple, and we even had time to stop in the supermarket to stock up on supplies before falling back into Margot, exhausted but thrilled with our fleeting glimpse of Rome.

Just time for a wonderful shower in the poshest camping toilets in Italy before we finally left Rome and headed for the coast in the morning. 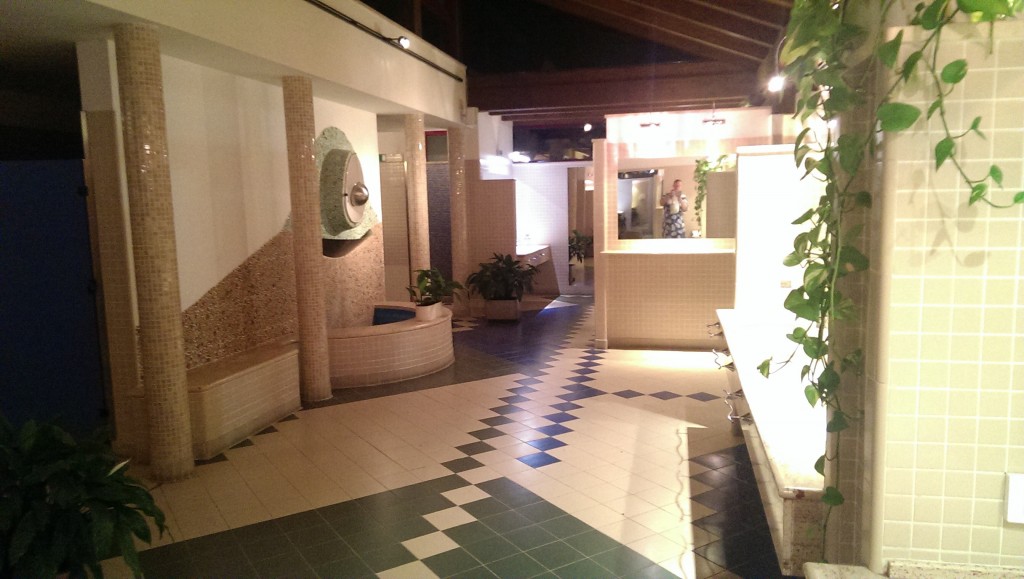 Seriously – this camping shower/toilet block is better than many hotels!

The fabulous Margot is an Approach Autograph 765, and was provided by Bailey of Bristol for the trip.
All campsites on our road trip were arranged by the magnificent AlanRogers.com. In Rome we stayed at Village Flaminio and it was a fabulous site. It’s within Rome’s central ring road, and in a motorhome the size of Margot, getting in and out was ‘interesting’ on Rome’s packed city centre streets. but the site is an oasis of calm, with excellent facilities. The information desk were excellent at helping us change our plans when we lost a day exploring thanks to the strikes and their quickly-drawn-on map proved a total lifesaver. The toilets were our absolute favourites of the whole trip, and the chemical facilities for emptying and cleaning Margot were the most easily accessed we found too. The pitches are roomy enough, and though the site is exceptionally long and narrow, stretching away from the main gate, a handy golf cart ferrying guests back and forth may have caused delirious smiles of relief at the end of a very long day walking the streets of Rome.