So finally, after two days and almost 1,000 miles, we arrived at our villa Les Suvieres, waaay down South near St Tropez.

First impressions were great – a long quiet tree-lined drive up an almost unmade track. As the car slowed to a stop we were greeted by a smiling older lady whose English was as good as my French – but we had enough to get by, and the welcome was very warm. After a couple of minutes her daughter arrived, whose English was excellent, and everything was very easy. 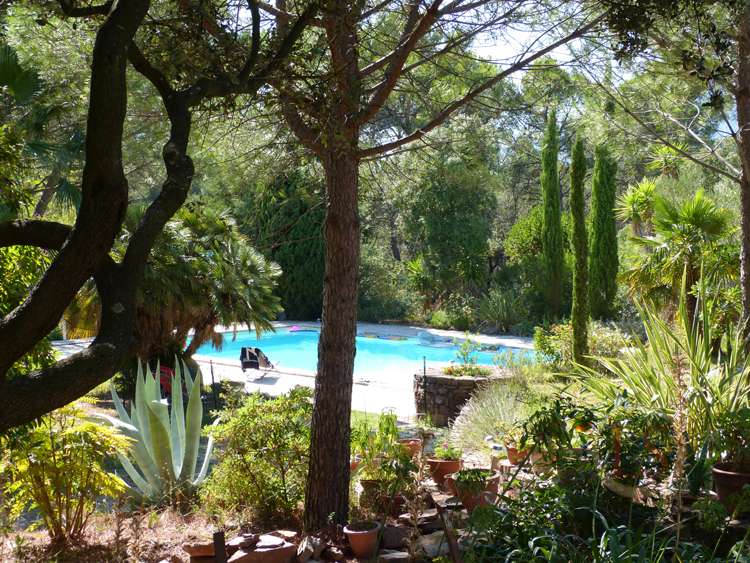 From the garden to the pool

We were briefly shown around the accommodation, and then it was explained that we had to go through it again with the inventory to make sure it was all okay. We agreed to do this with the owners, so that they could translate the French itinerary for us; they left us to haul all the cases out of the car before they came back and we began.
We had never had to do this before, in all the years we’ve been staying in cottages and villas, but the contract did state that it would be the case so we assured the children we’d just be 10 minutes then we could unpack and jump into the pool.
Little did we know that what it actually entailed was going through the house – Item. By. Item.
We had to count the glasses, the knives (and the forks and the spoons and every single ladle/sharp knife/saucepan plus lid). We had to note all pictures. The fact that there were 120 books on the bookshelf (we declined counting them for ourselves). The number of cushions. The fact that the chest of drawers in the boys room was ‘tres fragile’ and that the bottom drawer shouldn’t be opened. That the bedside tables in the other twin room were glass-topped, and therefore slightly a hazard with sharp corners. That the bathroom window should be left a little open. That the blind on the cupboard works like THIS. That every lamp/light did indeed turn on.
*sigh* 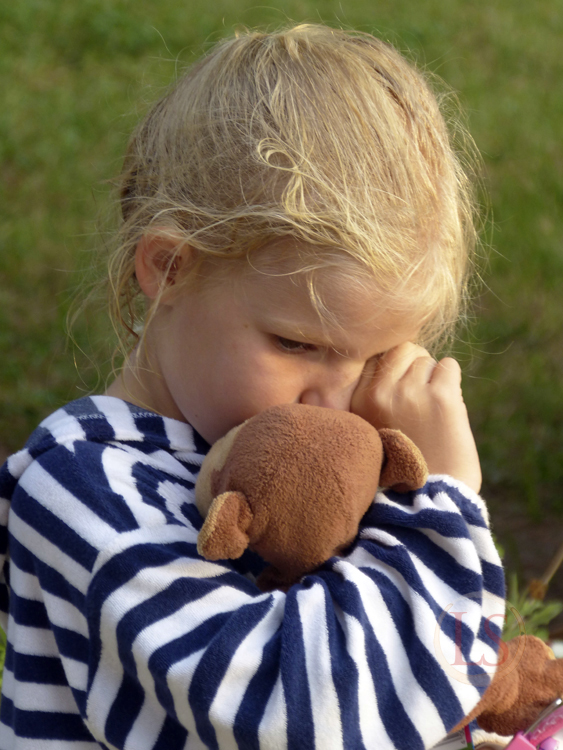 Finally we were done though, and the children managed to shed some clothes and jump in the pool. 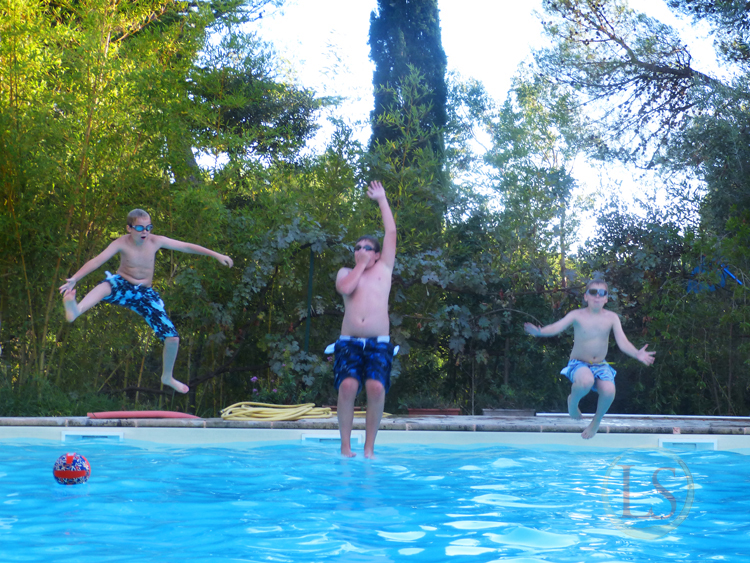 really – it was a Very Good Pool 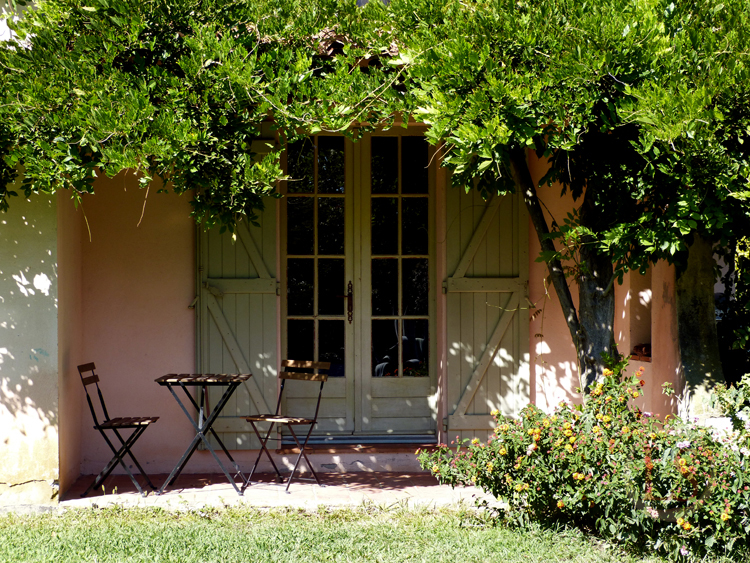 The boys double room – the one with the comfy bed. 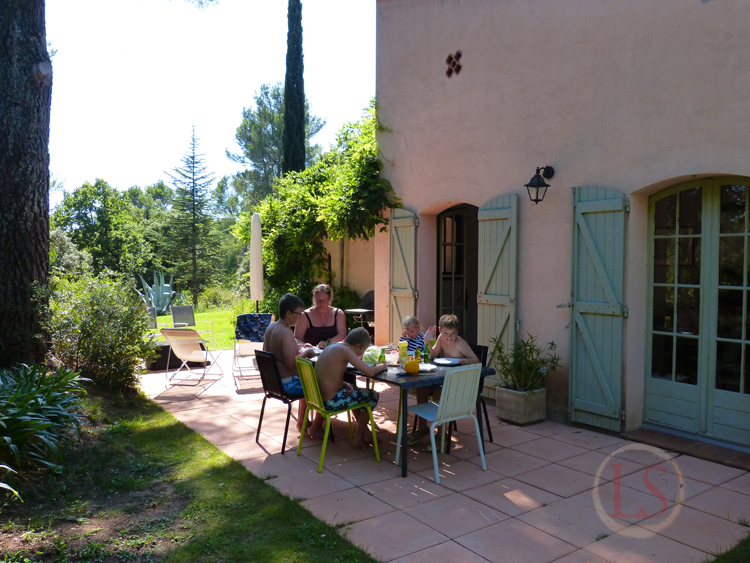 Lunch time – you can see the sun is nearly off our terrace already. Behind me is the lawn we crossed to get to the path to the pool. 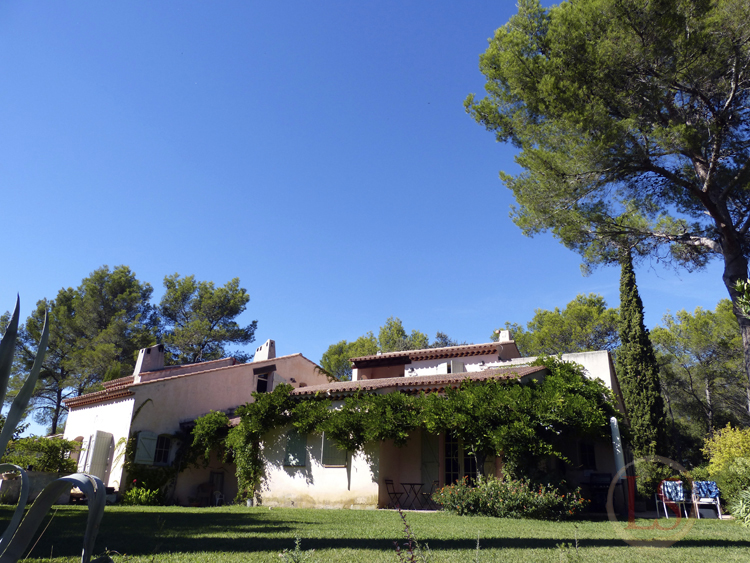 This is the entire property – the section on the right downstairs was ours on the ground floor, with our terrace to the right of that. This was taken at 3 in the afternoon – do note how we’re already in very complete shade, even though the owners garden itself is still very sunny.
To the left is the owners accommodation.

The apartment has been recently converted and modernised, and is fine inside. The kitchen is small but well-equipped, and the three bedrooms are more than spacious enough. The double bed the two boys opted to share was fine, but we didn’t sleep well in our double in the adjacent room.

The living areas, are very small for a family of six if you have to spend any time indoors. The tiny living space contains two small armchairs and a 2-seater sofa. Enough to seat 5 – 4 if adults – but not for all of us.
It would not have been an issue in the height of summer when you’d probably be outside, but in September we were out of the pool by 7 latest, and it was just too cool to enjoy long evenings on the terrace.

The external set up is fine – you have your own private terrace to the side of the house, and you cross the lawn area and down your own steps to the path along the bottom of the owners garden to the pool. 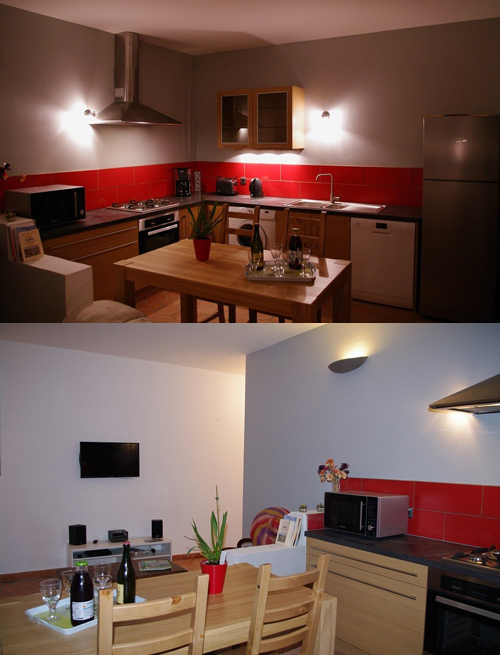 The entire living space (their photos, not mine). You can see the wall making up the seating for the table, and beyond the table the tiny living area that contained two armchairs and one two-seater sofa.

The pool was magnificent – huge and with one end deep enough for diving into. Really it was our favourite place to spend the day. There were a couple of wobbling loose edging stones we quickly learned to avoid, and a few cracks and crumbled edges in the surrounding concrete that damaged toes on a few occasions. 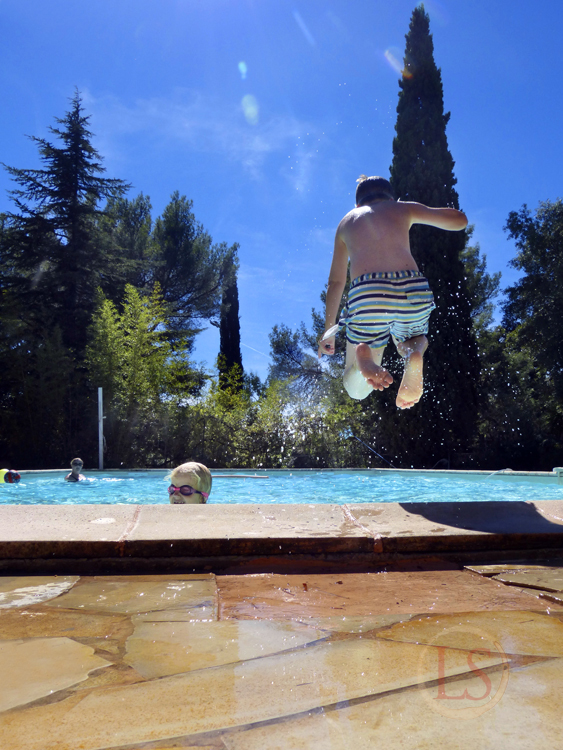 Brilliant pool times. But you can see the imperfect concrete around the pool, too. 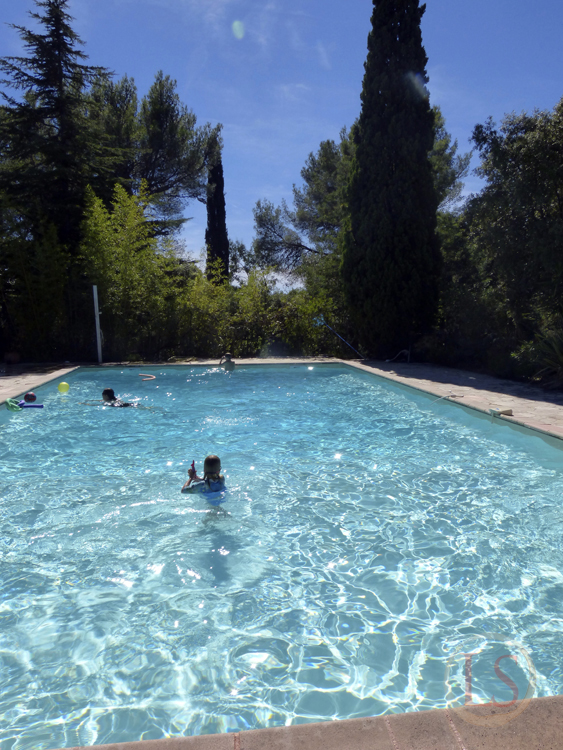 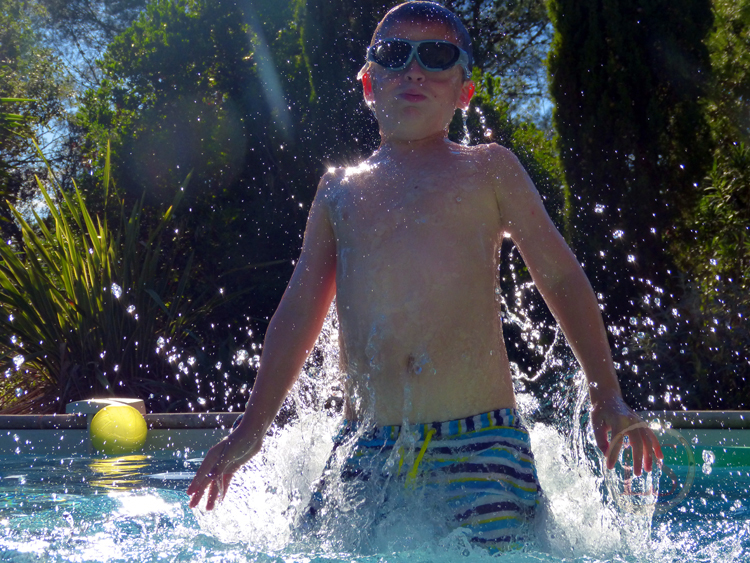 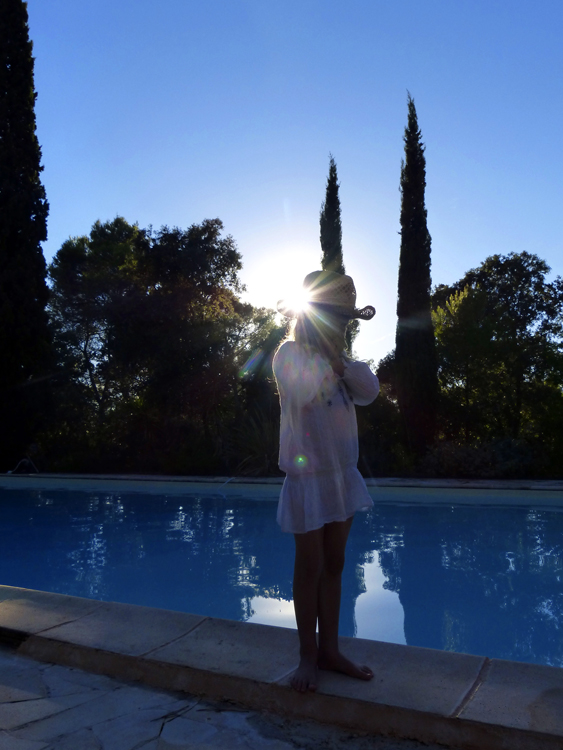 Hat and Tunic by Sunuva. Girl; Blogger’s Own. Sunset; courtesy of the Universe.

The local area itself was fine – but not the rural idyll we imagined. You are on the edge of the forest, and surrounded by trees. But also very close to the subarban area of Sollies-Pont, and the motorway traffic could clearly be heard, especially from the pool. The owners have a large acreage, but it was mostly left to scrubby wild woodland – we had imagined a more garden-like grounds, I guess. The one time we did explore it, I gained a magnificent set of 37 gnat bites on my legs. After that, I stayed well clear!

We did some exploring – and when we left the immediate vicinity we discovered the area was exceptionally beautiful, with stunning mountains and amazing villages to stumble across. the coast was obviously a big success, but also inland where we enjoyed exploring the tiny roads and passes. 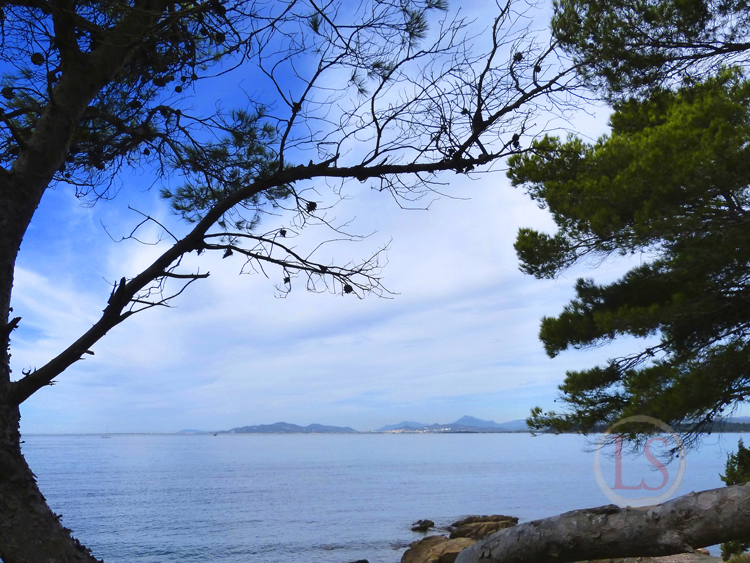 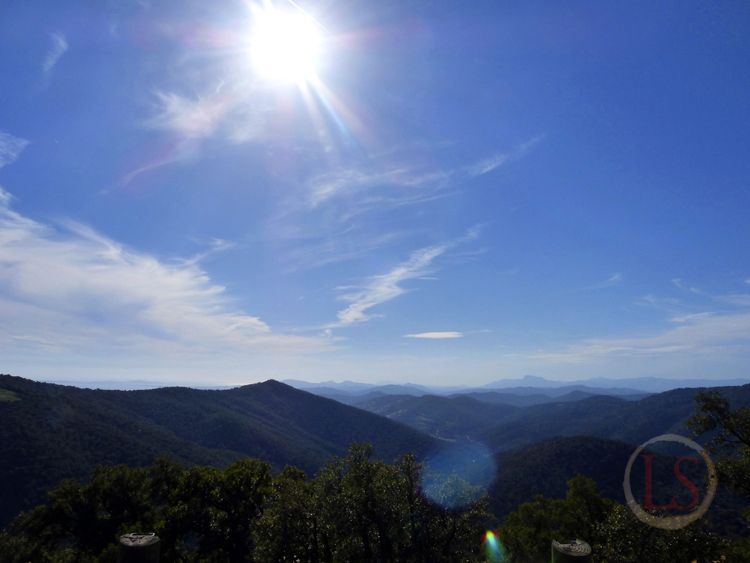 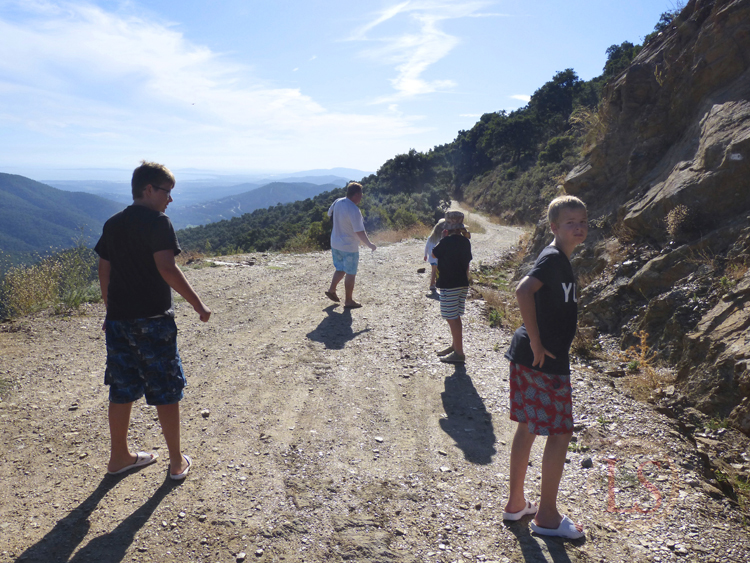 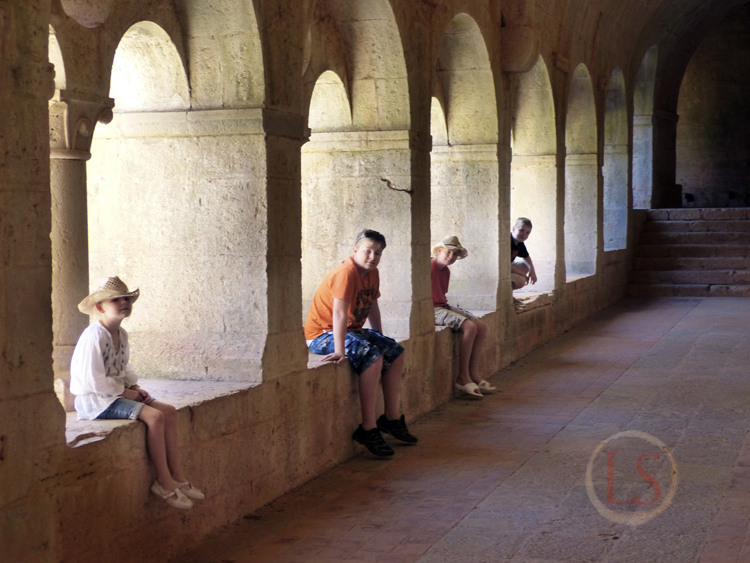 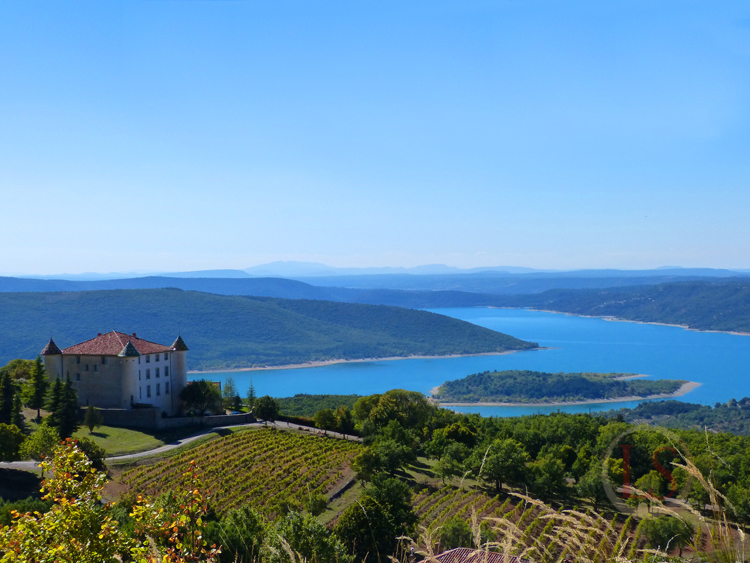 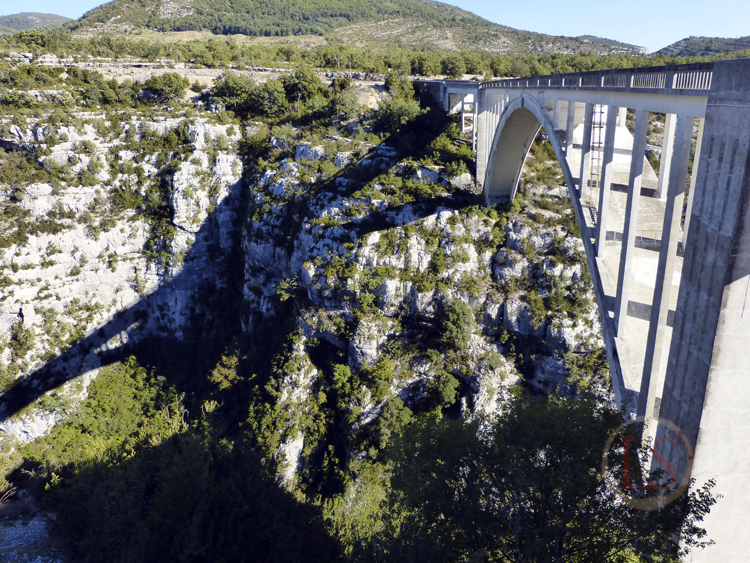 It should also be noted that the owners have two dogs – one of whom is very large. We personally had no issue with them, they were incredibly friendly and often sought us out for some company when the owners were away. But had I or my children really not liked dogs, I would have been very concerned this had not been communicated before my arrival, as the dogs have free reign to go where they like – and as I say, they’re exceptionally large and friendly! 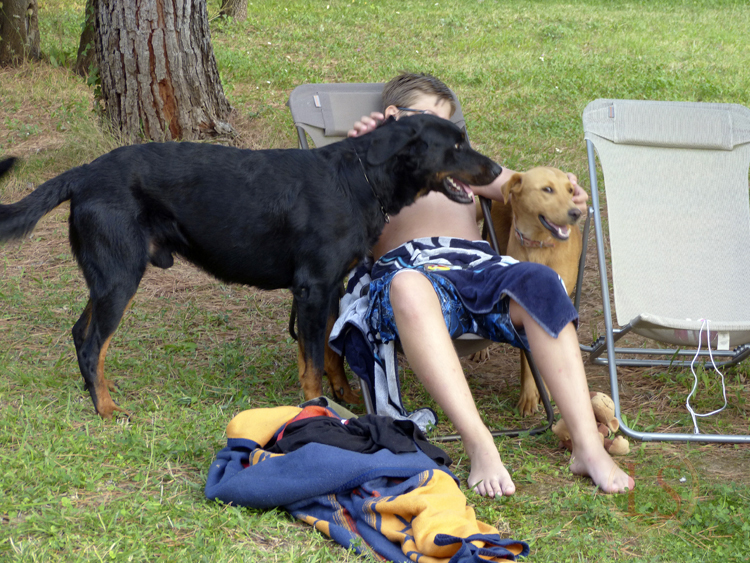 The Dogs of Les Suvieres!

When we left, the Itinerary had to be gone through again. However, the owners had left their son in charge, and he was far more practical; he whisked around each room, checked for major damage, peeked inside the cupboards and the dishwasher, signed the forms and handed back our security retainer. The whole thing took 10 minutes – totally in proportion, exactly as would have expected, and really not a problem at all. The walk to the pool. The sand pit is to the left, with the swing behind it out of the picture. The rockery to the right is the border of the owners lawn. 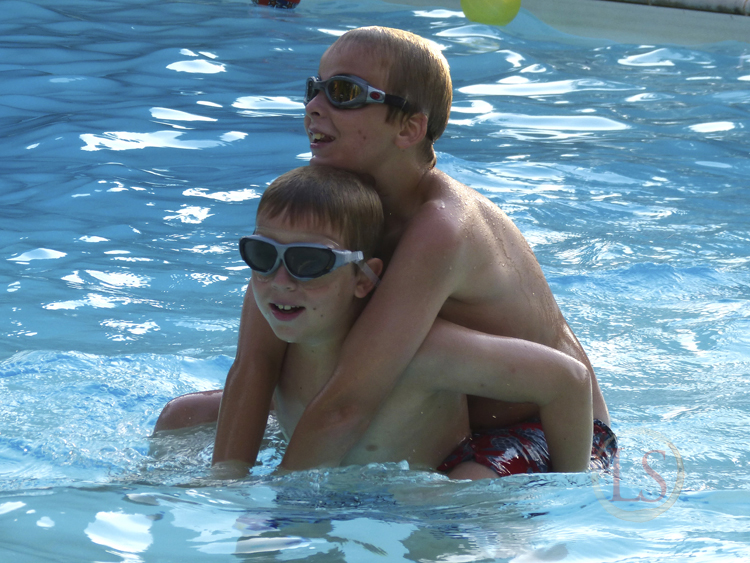 at the end of the day, family time is what a family holiday is all about. And we certainly managed that by the bucket load.

HomeAway were their usual helpful magnificent selves throughout the booking process, and cannot be held responsible for any shortcomings of the property. You can see Les Suvieres here – two weeks in September cost €1800 – that’s currently £1480.