Need an overnight at Heathrow? We say YOTEL.

A few weeks ago the oldest son spent his summer earnings on flights to the US to spend a couple of weeks with his girlfriend. With a little savvy price checking he managed to bag himself a very good price for his flights – but of course the downside to those super-cheap flights is always the timings. He had a very very early start from Heathrow – and two parents not willing to get up at 3am to take him there (again).

As with most teens, his budget wasn’t big, plus his travel times were very tight… and that’s where the rather extraordinary Yotel stepped in. I’ll hand you over to Cameron, and leave him to tell you all about it:

…So I had an early morning flight to JFK; when you’re flying as cheaply as you can, you don’t get to pick optimal flight times. As my flight was so early and I’d be travelling to London by train – I came to the realisation that it would be easier if I stayed nearby the night before (Note from Mum – actually, not easier; it was impossible to make the flight any other way).
But. An overnight in London was a squeeze on my already very tight budget, and then I’d still have had to wake up extra-early to catch the Heathrow Express or the tube across before checking my luggage in and finding my gate. And that’s when I discovered Yotel.

Oh Yotel. You’re so clever. And just so cool.
The ‘pod’ style hotels are scattered throughout the world, and handily there’s one at Heathrow (and Gatwick too); Heathrow’s Terminal 4. Yes, actually Terminal 4. I wasn’t staying near the airport, I was staying IN the terminal (where were you, Yotel, when Tom Hanks needed you in his terminal?)

After a traumatic trip to – and across – London (note to self – check the time of the last Tube to the airport before booking the last train out of Dorset. Even some Olympic level sprinting across deserted Underground stations couldn’t get me to Paddington before the last train for Heathrow left) I finally found myself planted at long past midnight by my lovely Uber driver at the door to Terminal 4. Completely lost, I asked a cleaner to point me in the right direction through the empty and eerily quiet terminal. Down an escalator and around a corner and two minutes later I found myself at the entrance to Yotel. 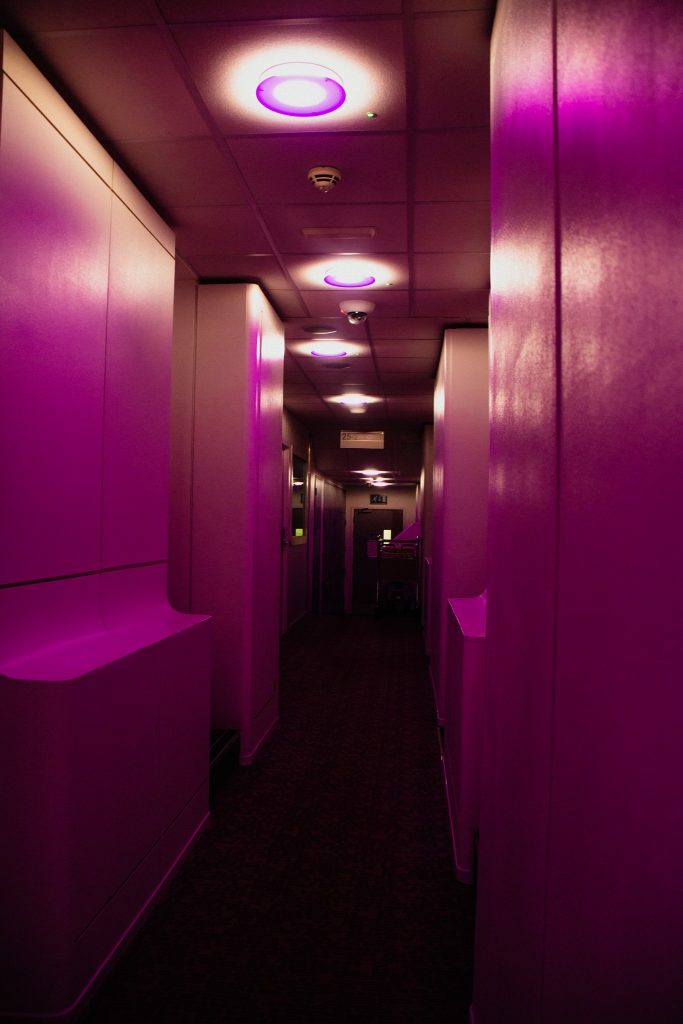 I was greeted by cheerful and helpful staff – who were far more awake than I was at that time of night. Actually I have to say right at the top that the Yotel staff were consistently superb, I really cannot commend them enough. They showed me along the corridor – which frankly looks like something out of Star Trek – and showed me inside. Not that there was much showing to be done!

Inside was a snug but perfectly formed tiny cabin – the use of space is simply design genius. For a room that I could simultaneously touch the furthest wall and the door, I had everything I’d need. Each cabin has super comfy bedding (and I mean super comfy), a flat screen TV, a pull-out workstation with a desk, an en-suite bathroom with a monsoon shower, plus unlimited free super-fast WiFi (not to mention the awesome bright purple mood lighting).

I planted my bags on the floor and immediately jumped in the shower (I actually ended up putting my suitcase in the shower after I was done using it, mainly because that seemed like a good place to put it. Don’t ask why), and after changing into more comfortable clothes, I realised how hungry I was; I hadn’t eaten anything all day. But it was now gone 1 in the morning.
I noticed the menu sitting on the table, and figured I’d try my luck – but I didn’t hold out much hope. I picked up the phone and within seconds heard
“Hello this is mission control, how may we help you?”
taken a little aback, I asked if they still served food this time of night to which I got a cheerful 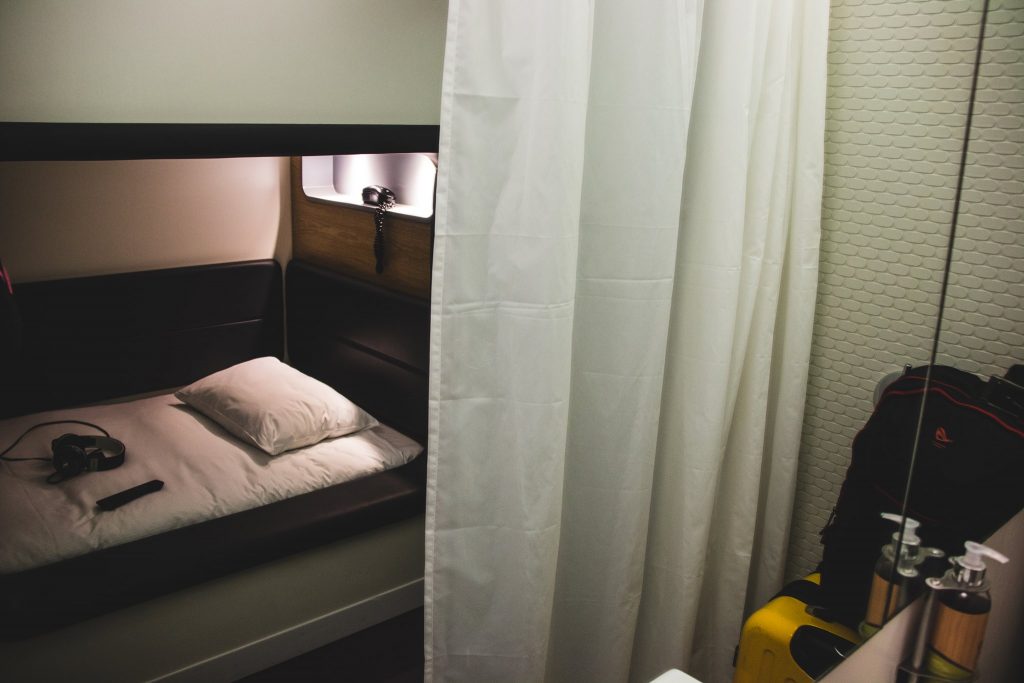 And that’s how I ended up in a pod hotel at almost 2am eating noodles and drinking coke. I climbed into bed shortly after, dimmed the lights and flicked on the TV. I briefly used the complimentary Wi-Fi to message my girlfriend and catch her up on the night’s escapade and then tried to watch a little (I fell asleep). 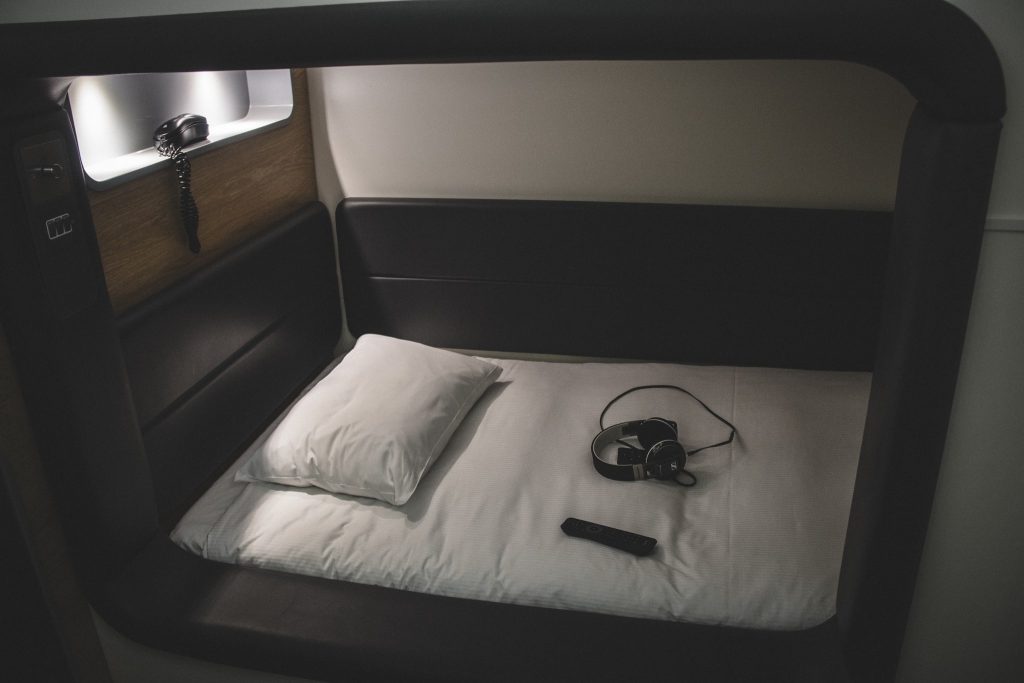 The TV is on the wall inside the bed pod to the right. Image courtesy of Cameron @ Athalos Photography

And I had an amazing night’s sleep! I’ll admit I was a little apprehensive when I saw the bed; I really didn’t think my 6’2″ frame was going to be friends with that oddly snug bed in the wall. But I felt cosy and cocooned all night, and had no issues with leg length whatsoever.

I woke up in good time (go me!), grabbed my things together, and left down the space-age corridor. The morning staff were just as friendly, and wished me well on my travels as I dropped my key off and then headed towards customs.

And that’s what impressed me the most with a stay at Yotel – I woke up and I was in the terminal, literally minutes from departures. There was no long commute back out from central London, or an awkward and annoying shuttle bus service from somewhere 3 miles away. I woke up inside Heathrow’s hustle and bustle. And you can get that privilege in Heathrow, Gatwick, Amsterdam and Paris – as well as their city locations in New York, Boston, Singapore and San Francisco (opening soon).

I honestly feel that Yotel is one of the most travel-improving innovations I’ve come across. It’s so SO perfect. The standard cabin was plenty big enough for me as a solo traveller – and actually my girlfriend and I would cosy up and share comfortably. It would be snug moving around, but for one night it would be fine, and the level of luxury and service for just over £70 a night, combined with the sheer amazing convenience of being right inside the terminal make it unbeatable for solo travellers.

And you can book the room by the hour, so if you have a 4 or 5 hr layover it’s a perfect spot to get some sleep. The family cabins are big enough to sleep four (from £100 a night), but for me as a solo young traveller I’m not sure I’ll ever go anywhere else if there’s a Yotel available – it’s perfect.

Did I mention there’s unlimited hot drinks available too? Free tea, 24hrs a day. I’m in.